SEC chairman ousted as probes on 17 ‘players’ near completion

The International Monetary Fund (IMF) yesterday expressed concern over the resignation of Securities and Exchange Commission (SEC) Chairman Tilak Karunaratne, as investigations on irregularities and unlawful activities by 17 alleged market manipulators were nearing completion.
Dr. Karunaratne, who resigned on Friday, after a losing battle to strengthen the regulatory process, told the Sunday Times that the claim that the market was over-regulated was ‘laughable’ and came from the “so-called crooks”.
He said he even received phone calls from some top government officials who urged him to go slow on certain players.

His resignation in the face of a dispute with this coterie of market ‘players’ follows the resignation of the earlier SEC chairperson Indrani Sugathadasa who quit in December last year for the same reasons.

“It is sad to see the SEC lose yet another strong chairperson, and in such a short period too,” IMF Sri Lanka Country Director Koshy Mathai, told the Sunday Times in comments from Washington, where he is on a visit.
The developments came just as the SEC was close to completing probes of market manipulation and insider trading against 17 investors, brokers and institutions, including high-profile businessmen who were among those who complained to President Mahinda Rajapaksa that both Dr. Karunaratne and his predecessor were enforcing�rules that were too rigid and not market-friendly.

Dr. Karunaratne, who noted that “this is my first and last state job”, said, “I gave some reasons for resigning in my two-page resignation letter. This didn’t come overnight. It came to a stage that I couldn’t resist resigning anymore. It is well known (and no secret) about those with power who manipulated the market”.
Other sources said the SEC’s report went out on Friday to the Parliamentary Committee on Public Enterprises (COPE) detailing the progress of the investigations and how the alleged manipulation of trades took place.
However, COPE Chairman and Minister D.E.W. Gunasekera, a national list parliamentarian, who freely spoke to the media last week praising the work of the SEC, suddenly turned non-committal this week on the developments as political pressure at very high levels of the government rose to oust Dr. Karunaratne in a bid to scuttle the investigations.

Asked by the Sunday Times, the COPE chief, who is also the Communist Party leader, refused to comment or be drawn into any discussion on recent SEC developments.

Dr. Karunaratne, more outspoken than his predecessor on the illegal trades, said, “there were strong allegations that those people who were called for questioning were coached as how to answer the questions by those involved in investigations (at the SEC). It was like leaking a question paper before an exam.” He was implying that there was a ‘mole’ at the SEC.

“The regulations are not up to international standards. We did not bring in new regulations and this talk about over-regulation is a canard spread by the so-called Johnny-come-lately set of high net worth individuals,” he added.
IMF’s Dr. Mathai said that from all credible accounts, Dr. Karunaratne and his team were taking “exactly the right steps” to ensure that stock market participants obeyed the rules. 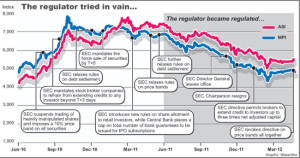 “In any country, it is only with a firm set of regulations and an active regulator to enforce them that foreign and domestic investors will have confidence that the stock market is indeed a level playing field for all and not just designed for the benefit of a select few. This is an important issue, as development of the capital markets is a key priority in ensuring Sri Lanka’s continued growth and prosperity,” he said.
The Ceylon Chamber of Commerce and the Sri Lanka Institute of Directors, representing the cream of the country’s business leaders, also expressed grave concern over the developments and urged the government to ensure the regulator was independent.

The Sunday Times reliably learns that an active foreign investment fund decided to suspend investments in the stock market, concerned that governing authorities had wilted under the pressure of a group of powerful investors with links to senior government personalities.

Sanjay Kulatunga, one of the SEC honorary commissioners, also quit. The SEC staff in a letter signed by a majority of the officials urged President Rajapaksa to reconsider the SEC chief’s resignation. Separately, the staff planned to hold a picket and protest outside the World Trade Centre building where the SEC office is located but was stopped from this move by Dr. Karunaratne, sources said.

In a parting, 10-minute meeting with the staff on Friday, Dr. Karunaratne thanked the officials for their dedication and diligence and left quietly, requesting no other speeches. “There was shock and an eerie silence,” one staff member recalled. “Even after he left, the room was silent because under his guidance the work done was in accordance with the SEC mandate,” another staffer said.

The recent developments in the market since Ms. Sugathadasa’s tenure have split the brokers into two factions. At least five members of the Colombo Brokers’ Association withdrew their membership on the grounds that it was controlled by a cartel.

“What has happened is sad. His resignation will affect the confidence in the market.
He was a rare person of integrity, honesty and stood by his principles,” said Cecilia Muthukumaru, Chairman of CT Smith Stockbrokers which was among the five brokers who pulled out. She said the practice all over the world was that the regulator had to be independent.

Asked about Dr. Karunaratne’s resignation, Colombo Stockbrokers Association President Sriyan Gurusinghe said, “It’s his personal decision. He used to have continuous dialogue with us. In the future we want to see someone in this position who will work with us for a longer period as it’s healthy for the stock market. We wish him well.”
Nimal Perera, a high net-worth investor and among those who were critical of the regulations, declined to comment on the developments.

Dilith Jayaweera, another high net-worth investor who made a presentation on how the market has collapsed at the recent stakeholders meeting with the President, was unavailable for comment despite repeated calls to his mobile phone.

Dr. Karunaratne said his resignation letter highlighted the work done and what was planned at SEC. “The regulations we have are not up to international standards.

We have studied the rules of other jurisdictions unlike the so-called mafia,” he said. He said when the economic parameters are weak in a country the money people have for savings become constricted. “Why should they come into the stock market when they can earn decent interest from finance companies and banks? When the bourse is like a casino they will go for a ‘safer’ investment,” he reiterated.
By Duruthu Edirimuni Chandrasekera
ST