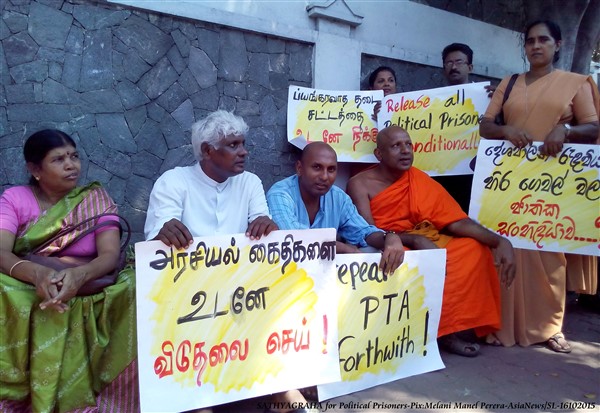 “Government has consistently undertaken to repeal the Prevention of Terrorism Act in view of the several obnoxious provisions contained in the said Act.

Several Tamil persons are held in custody under the provisions of the said Prevention of Terrorism Act for various offences arising out of the armed conflict.

It is seven years since the armed conflict came to an end. Though much time has lapsed, there is no finality to the issue of these Tamil prisoners in custody and several persons are in custody for long periods. These prisoners have been staging various protests and demonstrations from time to time demanding their release.

Several others who should have faced charges for much graver offences, have not been brought before the law while very many others have been released. This has happened recently and also after the insurrections in 1971 and 1988-89. The prisoners in custody genuinely complain that the treatment meted out to them is discriminatory and unequal. They have thus been denied equal treatment under the Law.

It is compulsory that the Government states its position on this matter and takes action to release the said prisoners. Their continuance in custody causes immense harm and harassment to their families, and impedes the process of reconciliation. The Government is seen as being insensitive to the genuine grievances of these prisoners.”

What are the obstacles?

We need to know, Sir, what the obstacle is to an acceptable decision being arrived at in regard to this matter. His Excellency the President pardoned his assailant and that man has been given his freedom. That really indicates his thinking.

I want to pose the question as to why others should be treated differently. It is seven years since the conflict ended. Persons have been in custody for long periods of time; some for about 10 – 15 years. There seems to be a justification for their release.
It is accepted widely that the Prevention of Terrorism Act is an obnoxious law and needs to be repealed. I want to, Sir, refer to certain matters which have been decided upon before the UN Human Rights Council in Geneva. Paragraph 12 of the Resolution adopted on the 1st of October, 2015 states, I quote:

“Welcomes the commitment of the Government of Sri Lanka to review the Public Security Ordinance Act and to review and repeal the Prevention of Terrorism Act, and to replace it with anti-terrorism legislation in accordance with contemporary international best practices; ”

Recently, the UN High Commissioner for Human Rights made a statement in June, 2016 and what did he have to say? He said, “The fate of remaining security detainees held under the PTA remains a major concern for the Tamil Community.”

“In December 2015, the Government released on bail 39 individuals detained without charge, but around 250 detainees are believed to remain in detention. The Government has made indictments in 117 of these cases and in January, created a special High Court Bench to expedite proceedings. The Government had promised that the Attorney-General’s Department would make decisions by the end of March, but there have been no further charges or releases this year. This situation is not only traumatic for the individuals concerned. Some of whom resorted to hunger strikes and for their families but a source of growing frustration among Tamil political parties and the community at large.”

There was a Statement made by the Sri Lankan Minister of Foreign Affairs, the Hon. Mangala Samaraweera also in June, 2016 at the UN Human Rights Council, where he said, “A Committee is now putting the final touches to the first draft of the new counter-terrorism legislation that will replace the much criticized and the much abused Prevention of Terrorism Act, in keeping with Sri Lanka’s commitments and obligations to human rights and countering terrorism.” Even the Sri Lankan Minister of Foreign Affairs described the Prevention of Terrorism Act as the much criticized and the much abused Act. He has said this in his Statement before the UN Human Rights Council. How can anyone be held in lawful custody under such a law? I want to pose that question. It is a law which you say is obnoxious, it has been criticized by everyone, not merely by people in this country, by the international community, and it is a law which has been abused. How can anyone be held legally in custody under that law? How can anyone be charged under that law? How can anyone be convicted under that law? It is our submission that all persons taken into custody under the Prevention of Terrorism Act must be released because your Government concedes that the law is unjust, is obnoxious and is not a law that should remain on statute books in this country. This is a law that must be repealed. So, I think the time has come for all these people who were taken into custody under this law, whatever their present status maybe, whether they have been charged, they have not been charged, and even if they have been convicted, it would be my very strong submission that all persons taken into custody under an obnoxious law must be released. Sir, it is sometimes said that some of these persons have committed grave offences. Most of them have not been convicted of having committed such grave offences up to now. But, if the law under which they are being charged, the procedure under that law in regard to arresting a person, in regard to investigating a person, in regard to prosecuting a person and in regard to coming to a finding in respect of such person is deficient, then surely such persons must be released. Does that law conform to principles of natural justice? What does it matter, whether the offence is grave or not?

It maybe a grave offence. It may not be such a grave offence. But the fact of the matter is that the provisions of the law under which that person is dealt with are unacceptable. And if the law is unacceptable, it would be my submission Sir, very strongly, that those persons must be released and that there is a compulsory need to look at this matter objectively.

Is KP a favourite of the government?

What is worst, Sir, is different people have been treated differently. I normally do not refer to persons by name, I do not like to do so. But the prisoners pose the question, “Why has KP not been charged?” He was a favourite of the former Government. Is he a favourite of the present Government? Why is the Government not taking action against him? He is a person who is believed to be on the wanted list of the International Police, Interpol. He is a person who has not merely smuggled arms to this country, he was the chief arms procurer. What has happened to other persons who had held Ministerial office in the former Government – the person who held the position of Chief Minister in the Eastern Province? Have they not committed grave offences? Why do you not charge them? You pick up some youth or people from weaker sections of society and you hold them in custody under the Prevention of Terrorism Act.

I do not think, Sir, this should continue any longer. These prisoners want to know, “Are the offences that we have committed graver than the offences committed by the other people?” In 1971 there was an insurrection. In 1988 and 89 there was an insurrection. A large number of persons were taken into custody. They were eventually released. They were sent home. They were pardoned. They took to arms against the State. They conducted an armed insurrection against the State. But you pardoned and sent them home. How can you justify keeping these persons in custody any longer, particularly when you admit that the law under which you are holding them in custody is not a law which conforms to principles of natural justice either by domestic norms or by international norms? Therefore, Sir, I would very strongly urge that these persons must be released. It is our duty to raise this issue on the Floor of this House on behalf of these prisoners.

This government has even lagging behind Rajapaksa

The Tamil people as a whole look upon the reluctance of the Government to act firmly in regard to this matter as a severe impediment to the process of reconciliation. Even the Mahinda Rajapaksa Government released over 11,000 persons in custody. They gave them rehabilitation and released them. But this Government in the course of the past almost 18 months or more than that has not been acting in this matter as expeditiously as we expected them to.

I wish to also record, Sir, that this afternoon, I and my Colleague, Hon. Sumanthiran, had a meeting with the Hon. Prime Minister which was also attended by the Hon. Minister of Justice and the Hon.Deputy Minister of Justice and we discussed this matter fairly extensively with the Hon. Prime Minister. Then, there is a meeting to be held by the Hon.Minister of Justice this Friday with the Attorney-General and other relevant authorities to examine the question of how this issue can be addressed without further delay. We would very strongly urge, Sir, in the context of these persons being charged under a law which you, yourself concede as being unfit to remain in the statute books of this country, that all these persons are entitled to be released irrespective of whether they have not been charged, they have been charged or even those who have been convicted. It would be my submission, that if you accept that basically, your law is not a just law that entitles them to their release.
I thank you, Sir.

– Adjournment motion presented by Hon. Sampanthan in Parliament  with regard to the Tamil political prisoners on 23rd August . Heading are from SLB.