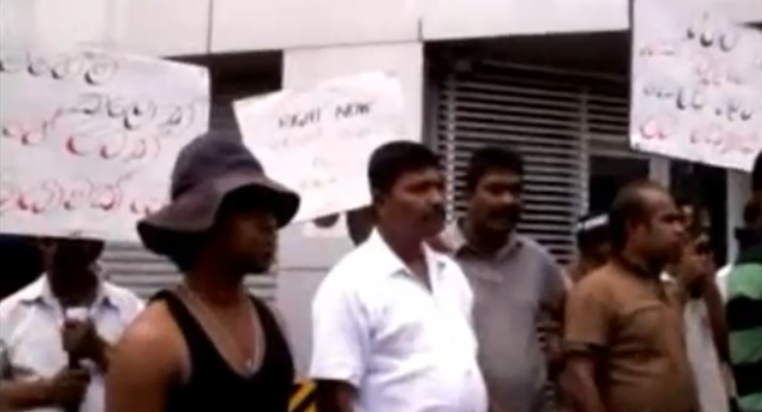 The Sri Lanka Working Journalists Association (SLWJA)  condemns in the strongest terms yet another act of intimidation of media by the government orchestrated mobs who sabotaged a planned media workshop for Jaffna journalists scheduled at the Sri Lanka Press Institute (SLPI) today( 26). The workshop on Digital media Security for a group of media personnel from Jaffna was to be held at the Sri Lanka Press Institute today.  However, 16 journalists who were heading to Colombo for the media workshop was detained by the Army at the Omanthai Military  Check Point on the purported charges of having Cannabis in their procession on Friday evening and were handed over to the police.  They  were subsequently released by the police,  on the same day night and were instructed  to  return to Jaffna.  (The driver of the van travelled by journalists remains in police custody.)

The media personnel however headed to Colombo for the workshop. However,  this morning,  a group of government organized mobs have gathered in front of the SLPI, threatening to storm the institution should the workshop be held.  The hapless organizers were forced to abandon the workshop.

Subsequently, the activists of media organizations who have been planning to hold a media conference about the incident are now receiving death threats. The Convener of Free Media Movement,  Sunil Jayasekara received a series of anonymous calls, threatening with murder should the planed media conference go ahead.
SLWJA  sees in this latest incident, the familiar pattern of intimidation that has been unleashed by the government and its military apparatus in the past. Earlier, two workshops organized by the Transparency International were sabotaged in the same manner.

We condemn this latest incident in the strongest term and stand in solidarity with our colleagues. We are, especially, concerned about the security of Jaffna  media colleagues and would continue to monitor the situation.

We call upon the government to abandon its not so covert modest operandi that is put in place to intimidate the press and media activists.  Those acts  continue to vindicate the hollowness of the government’s commitment to democracy and fundamental rights enshrined in the constitution.
Ranga Jayasuriya

General Secretary
On behalf of the Executive Committee