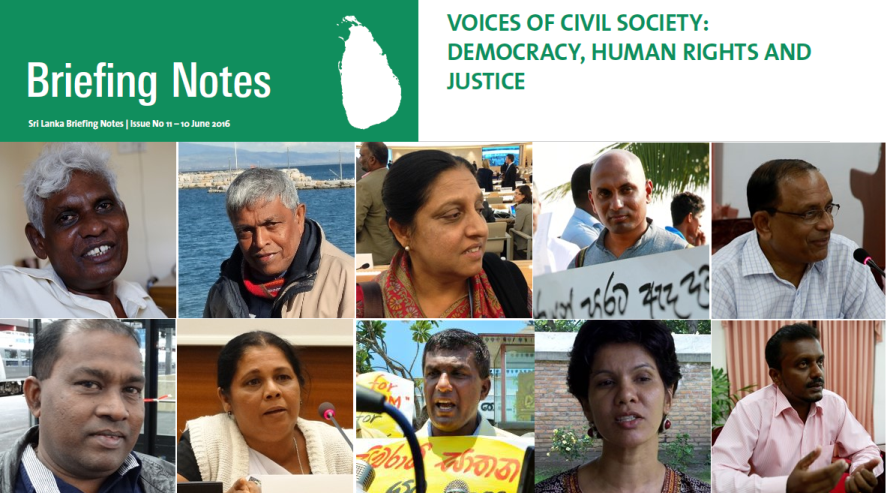 The implementation of pledges made by the new Government to the people of Sri Lanka and to the international community on human rights and reconciliation has not yet proceeded as expected. Early enthusiasm on achieving much needed democratic reforms and a corruption-free governance has started to recede. The Government has not sufficiently implemented issues like demilitarisation, resettlement, release of political prisoners, and has not repealed the PTA. The most needed security sector reforms are left untouched.

At the same time, people have been able to assert their civil and political rights through the democratic space that opened up through the regime change in 2015, even if the transitional justice process still remains a serious concern. In addition, the enjoyment of economic, social and cultural rights need an economic space which has not yet been opened up.

These developments have to be located within the wider political context. The current so-called ‘good governance’ Government is a coalition of two major political parties which fought each other to capture state power for more than five decades. Mistrust and antagonistic feeling of each other are therefore embedded in both parties. Indeed, this coalition is a marriage of necessity rather than of conviction. Yet, one of the factors that hold both parties together is the commitment shown by President Sirisena, the leader of the SLFP, and by Prime Minister Wickremasinghe, the leader of the UNP, towards democratic reforms. This also includes the drive to find a political solution to the ethnic issue.

In this context, two other actors have played a pivotal positive role: On the one hand, civil society has been effective to hold the two political leaders accountable in regards to the promises they made and the mechanisms they have established to ensure good governance and the implementation of human rights. On the other hand, the international community have expressed economic and political support to the Government and pushed the reform process forward.

In contrast to this, former President Rajapaksa mobilises against the Government and his efforts to weaken the Government by fostering Sinhala nationalist extremism is a major risk factor in the country. He has not allowed current President Sirisena to take the reins of SLFP and has created his own faction of the party, campaigning and mobilising against any criminal justice procedures undertaken against members of the military. Seemingly, Rajapaksa aims to play the military against the new Government and its reform process.

A second destabilising factor, that has not been sufficiently considered yet, is the possibility of an economic recession. Currently, the country is facing a debt trap. Sri Lanka’s foreign debt increased during Rajapaksa’s second term from US$ 18.6 billion in 2009 to US$ 44.8 billion in 2015. Sri Lanka’s debt servicing costs, i.e. capital repayments and interest costs, amounted to US$ 4.68 billion in 2015 which constitutes 45% of the country’s export earnings of the same year. These economic considerations clearly call for economic reforms which seem to be the weakest link of the current Government and need to be addressed urgently.

As a whole, the reform process has gained an important momentum recently, probably in view of the upcoming 32nd session of the Human Rights Council in June 2016. The Government has improved its relations with the UNHRC and has opened up the country for human rights scrutiny by UN agencies.

Despite the different weaknesses in the reform process, this current political momentum remains the best opportunity for Sri Lanka to move its reforms forward, to ensure democratic governance and to assert the rights for its people.