Report: All Provincial Councils Want the Powers of the Governor to be Reduced Substantially 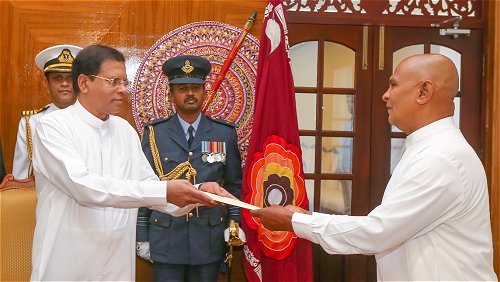 Concluding text of agreed outcomes of the Conference of Provincial Councils of SriLanka held on 7th August 2016 says that The powers of the Governor must be substantially reduced. Except in clearly identified emergency or other exceptional situations. The report of conference, which  was organised by the Centre for Policy Alternatives (CPA) in Colombo has now been published. The report has been edited by Dr. Asanga Welikala, an expert on constitutional making.  Among other important agreements are the proposals to  abolish the Concurrent List of the Provincial Council Act, to establish a provincial police service,  to establish a  National Land Commission and a Provincial Land Commission, to formalize the Chief Ministers’ Conference.

Although the conference had  extensive discussion during the plenary and breakout sessions about such matters as the nature of the Sri Lankan state, in particular the question of its self-description as a unitary or federal state there has not been a consensus position on the subject .  “However, there was broad acceptance that Sri Lanka’s unity and territorial integrity must be safeguarded by the constitution while providing for the maximum possible devolution within that framework.” says the report:

The section of the agreed outcomes of the Conference are given below:
Centre-Province Relations

There has to be a clearer demarcation of the national and provincial spheres in the new constitution. The Concurrent List must be abolished. The new constitution should reflect two lists of powers to be exercised by the central government and Provincial Councils respectively. There could also be a third list of powers that enumerates the functions of the local government authorities.

In determining how to allocate powers and functions between the national, provincial, and local spheres, the principles of non-replication, subsidiarity, and proportionality should inform the drafters of the new constitution. The principle of non-replication guarantees that, except in relation to those areas that necessarily require the co-operation of the national and provincial levels of government, functions and powers that are devolved to the Provinces are not replicated by central institutions. Replication denudes provincial autonomy. The principle of subsidiarity ensures that political decisions are taken as closely as possible to the citizen. Except for matters that are best dealt with at the national level (such as defence, international relations, currency and customs, national development, etc.), most or all other powers should be devolved to the provincial and local spheres.

Normally, national institutions should only act when it is impossible, impractical, or inappropriate for the provincial and local institutions to deal with certain governmental functions. Where certain powers and functions are more effectively, efficiently, or appropriately exercised by national rather than provincial or local institutions, then the national institutions must act in conformity with the principle of proportionality, to ensure that its actions do not go beyond what is necessary to achieve legitimate national policy objectives within a multilevel system of government. The new constitution must also enshrine the principles of subsidiarity and proportionality within the future devolution framework, so that it can be interpreted, operated, and implemented in their spirit.

The powers of the Governor must be substantially reduced. Except in clearly identified emergency or other exceptional situations when the Governor may exercise certain powers (such as the dissolution of a Provincial Council) in his own discretion or on the direction of the President, executive powers within the Province must normally be fully exercised by the Chief Minister and the Board of Ministers who are democratically accountable to the Provincial Council and the people of the Province. Subject to constitutional safeguards and independent oversight mechanisms (such as the Provincial Public Service Commission, Provincial Police Commission, and the Finance Commission: see further below), the direction and control of the provincial public service, provincial public finance, and law and order must vest in the Chief Minister and the Board of Ministers. The nature and extent of these powers and the framework for their exercise must be laid down in the constitution itself. The constitution must prohibit the scope for these powers to be clawed back through national legislation (as has happened under the Thirteenth Amendment through legislation such as the Provincial Councils Act).

In general, the Governor should have no power to review, veto, or delay provincial legislation or public financial proposals of the Board of Ministers. It should be the constitutional role of the Provincial Council, and not the Governor, to ensure the political accountability of the Board of Ministers. This should include the power to withdraw confidence from the provincial administration leading to the latter’s resignation.

However, the constitution may specify certain classes of legislation that the Governor may reserve or send back for reconsideration. This must be strictly limited to areas such as the prevention of ethnic or religious discrimination, and there must be an express time limit within which the Governor must act in such rare cases. If such powers are provided to the Governor, then the Board of Ministers and the Provincial Council must be able, after due consideration of the Governor’s views, to either accommodate or override the Governor. They must also be empowered to seek judicial review of the Governor’s decisions. Both provincial legislation, and provincial executive and administrative action, should be fully judicially reviewable by the courts for constitutionality at any time.

The present overbroad provision with regard to the power given to the national government to set ‘National Policy on all Subjects and Functions’ (first item on List II (Reserved List) of the Thirteenth Amendment) must be reformulated. When National Policy that impacts on the devolved provincial sphere is contemplated, there should be a mechanism for consultation with Provincial Councils, including to determine what is properly deemed ‘national’ policy and what is more appropriately dealt with by the Provinces.

Further devolution to the Provinces should be balanced by institutions and procedures for ‘shared rule’ at the centre. A second chamber in the national legislature is an indispensable element of shared rule in a system of multilevel governance. A suitably designed second chamber would give representation and a voice for the Provinces in the making of national legislation and in debating matters of national importance.

It should be able to prevent, or at least, force the reconsideration of national legislation or executive measures which would impinge adversely on the provincial sphere or undermine the constitutional system of devolution. The new constitution should provide for the future second chamber to be composed mainly of representatives elected by the Provincial Councils. Provincial delegations to the national second chamber could include Chief Ministers and provincial Leaders of the Opposition. The second chamber should be a permanent body, i.e., not a body that is convened only on occasions when the national legislature is considering measures with significance for devolution.

The Chief Ministers’ Conference, which at present functions informally, should be formalised. The recent practice of joint meetings of the national Cabinet with Chief Ministers should also be formalised. In addition, administrative arrangements should be put in place for regular coordination and consultations between national and provincial executives, to ensure the smooth functioning of multilevel governance.

Law and Order
Law and order powers and functions can be shared between national and provincial policing institutions without any prejudice or threat to the national unity or territorial integrity of Sri Lanka. The National Police Service should deal with serious matters that are more appropriately dealt with at the national level such as organised crime, terrorism, narcotics, databases and statistics, etc. The Provincial Police Service can deal with all other functions including community policing, minor crimes, traffic, etc. This would ensure a more efficient, effective, citizen-friendly, and accessible police service throughout the whole country.

A Provincial Police Commission (PPC) should be established and decide on the appointment, promotion, transfer, disciplinary control and dismissal of police officers within the Province. Appointments to the PPC could be made under one of two alternative mechanisms: (1) appointment by the Constitutional Council; (2) two appointees nominated by the Chief Minister, one appointee nominated by the provincial

All recruitments of lower level police officers are to be carried out by the Provincial Police Commission, and where appropriate and necessary, may be required to reflect the ethnic ratio of the Province. All police officers must be subject to national language proficiency requirements which are linked to promotions and emoluments, the framework for which is already provided by law. However, policies of time-bound exemptions and/or affirmative action may be implemented for Provinces affected by protracted conflict, in order to compensate for long-term disruptions to the public education system. It is also desirable that the Provincial Police Service should include at least twenty percent women officers.

Land and Natural Resources
A National Land Commission and a Provincial Land Commission must be established. The alienation of state land must be according to the principles formulated by these Commissions, having regard to the legitimate requirements of both national and provincial spheres. Associated matters such as forests, water resources, irrigation, non- renewable natural resources need also to be revisited with a view to clarifying the powers, functions, and responsibilities of the national and provincial spheres. These are areas in which there can be no exclusive division of powers and functions, and accordingly mechanisms need to be established for consultation and concurrence so that fair decisions are made with adequate regard to the interests of both national and provincial spheres. This principle must be applied immediately to existing national legislation (e.g., Mahaweli Authority of Sri Lanka Act, Urban Development Authority Act, Tourism Act, etc.).

Other Issues
There was extensive discussion during the plenary and breakout sessions about such matters as the nature of the Sri Lankan state, in particular the question of its self-description as a unitary or federal state. There was no clear consensus on this issue. However, there was broad acceptance that Sri Lanka’s unity and territorial integrity must be safeguarded by the constitution while providing for the maximum possible devolution within that framework.

Download the publication in full as a PDF here.