‘Rally for Unity’, a March towards Reconciliation 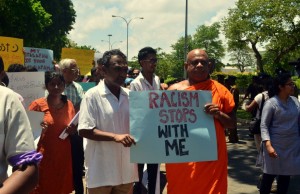 Kamaya Jayatissa
It is often the case that a nation which experienced a protracted war will tend to look forward rather than backward. For Sri Lankans, over the years, the war became a part of their lives, and survival a part of their routine. In such a context, healing becomes a lengthy and culturally-bound process.

Though some may find it difficult to achieve, such process cannot be understated or underestimated when it comes to building a deeper unity, thus a sustainable peace for Sri Lanka. But how many of us really took the time and space to actually forgive and heal from a war that scattered a whole nation for over three decades, leaving behind scars that are still visible from the outside. How many of us actually grasped the opportunity to make a change?

Last Sunday, April 28th, marked a turning point in building such unity when a “voluntary movement of concerned Sri Lankans from various institutions, professions and industries” organized ‘Rally for Unity – Hate has no place in Sri Lanka’, a non-partisan anti-racism march for the promotion of ethno-religious harmony. Hundreds of people gathered for the occasion near the Nelum Pokona, in Colombo, irrespective of their political affiliation, ethnicity or religion. Holding banners in all three languages they began a peaceful protest, which in only two hours, brought together protestors from various backgrounds and affiliations. From politicians to members of the Clergy or diverse faiths, from students to civic society; they all gathered as one.

These peaceful protestors reminded us that although some may believe that it is their right to freely express themselves without any restraint whatsoever, one should always keep in mind that one’s freedom stops where someone else’s freedom begins (from the French proverb “La liberté des uns s’arrête là où commence celle des autres”). This means that freedom is being able to do anything that does not harm other members of a society who have the same rights. This was expressed in Article 4 of the French Declaration of Human Rights (1789):

“Liberty consists in being able to do anything that does not harm others: thus, the exercise of the natural rights of every man has no bounds other than those that ensure to the other members of society the enjoyment of these same rights. These bounds may be determined only by Law.”

This was later on confirmed in Article 29 II of the Universal Declaration of Human Rights (UDHR) which states that:

“In the exercise of his rights and freedoms, everyone shall be subject only to such limitations as are determined by law solely for the purpose of securing due recognition and respect for the rights and freedoms of others and of meeting the just requirements of morality, public order and the general welfare in a democratic society.”

This awareness campaign against hate-speech and against the marginalization of minority communities in general was the opportunity for all communities, both the majority and the minorities, to peacefully express themselves as one voice, the voice of unity and of diversity. But most importantly, it was the opportunity for the younger generation to stand up for what they believe was right and say out loud, as could be seen on their banners, that ‘Racism stops with me’. Such campaigns are not only inspiring but they also give back hope by showing that the moderates will not remain silent any further when witnessing talks or acts of hate speech against a members or a member of any community.

This Sunday’s ‘Rally for Unity’ was not merely a march against racism. It is indeed the starting point of a march towards reconciliation, a march for equality, freedom and co-existence between communities that are still healing from decades of war. It is thereby a response to some of the long standing challenges faced by the country in its post-war era and mostly a response to the recent incidents promoted by ethno-religious fundamentalists. By starting this movement, which hopefully will inspire many and generate similar events island-wide, the Sri Lankan youth successfully opened an alternative space for a peaceful ethno-religious dialogue; a space which is both independent and inclusive enough to be in its own way disconnected from the State apparatus. Developing such a creative and critical thinking is an achievement that needs to be taken into account in times of crises. So far, such a space was barely available for people to express themselves freely, without any fear.

The challenge for the younger generation now remains in maintaining this space by strengthening, on a long term basis, their commitment to values such as pluralism and equality; enlightened values that will help forge a more united Sri Lanka.
– courtesy Grounviews