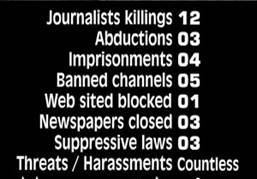 Former president Rajapaksa who unleashed an unprecedented media suppression in Sri Lanka has issued  a press statement accusing present government of media suppression. Under Rajapaksa dozens of news websites were blocked, media institutions attacked, dozens of journalists were abducted and killed with total impunity. Rajapkasa regime controlled by various means  all most all electronic and print media institutions in the country.

Under this context Rajapaksa is trying to be the saviour of press freedom of Sri Lanka.

We publish full text of the ex-President Rajapaksa’s statement below.

“While the people’s attention remains focused on the budget and on constitutional reform, the government has launched a repression campign against the media. The secretary to the media ministry wrote to Derana TV last Friday asking them to explain the alleged distortion of a speech made by the president in one of their news bulletins before ‘further action’ is taken against the news channel. Earlier, on 25 October, the same official had written to Derana TV informing them that an inquiry is being conducted into this matter. The speech referred to was the one made by the President on 12 October at the Sri Lanka Foundation Institute where he had said among other things that the CID, FCID and Bribery Commission were working to a political agenda and that he was opposed to the manner in which the former defence secretary and three former commanders of the navy were taken to courts.

“The following day (26 October), Derana TV replied to the media ministry saying that in any TV news bulletin anywhere in the world, only a one or two minute segment of a  speech lasting 30 or 45 minutes would be broadcast. They had also pointed out that there was no difference between the segment of the speech they had broadcast and the content of a statement issued by the presidential media division on the same day. Despite this response, the media ministry secretary has once again called for an explanation from  Derana TV.

“Even though the letter sent to CSN by the media ministry secretary had stated that an inquiry had been held, CSN has informed the media that none of their directors or employees had been called for an inquiry.  Some time ago, a website critical of the government called ‘Lanka News Web Today’ was blocked by the Telecommunications Regulatory Commission. This government has arrested and jailed several young people for making posts critical of the government in their face book accounts.  On one occasion a youth returning from overseas was arrested at the airport for allegedly making death threats against the president on his face book account.  One of those arrested and jailed for making face book posts critical of the president was the deputy chairman of the Southern Provincial Council Sampath Atukorale.

“All this is a part of a concerted effort to prevent the media from reporting anything detrimental to the government and to strike fear into young people so that they will not share critical thoughts about the government even on their private face book pages. The people have seen the manner in which the prime minister routinely issues threats to media organisations and to individual journalists. The action taken against Derana TV and CSN shows that the government has started following through with those threats. Last Saturday, the prime minister speaking in parliament in the presence of the President once again stressed the need to bring the media under their control.

“Media repression is now a cornerstone of this government’s policy.  Not a day goes by without a major demonstration against the government. The government is avoiding holding the long overdue local government elections due to the fear of defeat. They are now trying to intimidate and control the media so as to prevent the people from being informed about what is going on in the country. We unreservedly condemn this attempt to stifle the media and to destroy the last vestiges of democracy in this country.”