Rajapaksa has lost control of Brother and Son – UNP 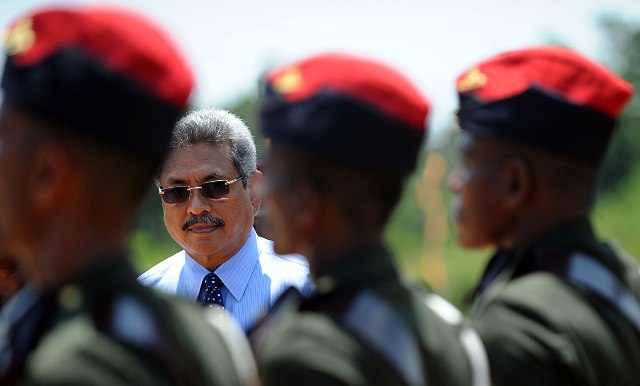 Main opposition United National party says that president Rajapaksa has ”lost control, not only of his brother the de facto minister of defence, but even his young offspring whose illusions of grandeur and blatant disregard of the norms and traditions of civility”. Issuing a statement on the defamatory article published by the Ministry of Defence on Indian political leaders it says the writer of ”concerned is a regular contributor to the Defence Ministry website and on numerous occasions has written articles attacking minority communities in Sri Lanka.”

Sri Lanka was acutely embarrassed after the recent fiasco concerning the defamatory article published by the Ministry of Defence which resulted in the demand of a humiliating apology to the Indian Prime Minister. The slip-up is emblematic of the pathetic state of affairs in handling Sri Lanka’s foreign relations. It also offered valuable insight into the way the Sri Lankan Government functions under Rajapaksa Incorporated.

The Defence Ministry committed a fatal error in failing to recognise that opinions published on its official website, was tantamount to being reflective of the opinions of the Government. This is true of official websites and social media sites administered by Government agencies across the world. It is hardly surprising that the Defence Ministry failed to understand this most elementary fact. Like all other state institutions and agencies, the Defence Ministry has become severely politicised under the Rajapaksa regime, with incompetency and nepotism triumphing over experience ability and basic intelligence. Furthermore this Government and its official mouthpieces have grown accustomed to having their say, often in the most uncivilised and brutal terms, vilifying foreign Governments, the United Nations and its officials or local political opponents and dissidents. They rarely ever have to face the consequences of their actions.

Sri Lankan Defence Minister, Mahinda Rajapaksa has called for an inquiry into the issue which nearly escalated into a diplomatic row. This is nothing more than ridiculous and farcical. After all, who is the administrative or bureaucratic head of the Ministry of Defence? Who after all, is the Minister in charge of the subject? Will the President investigate himself? Will he inquire into the conduct of his brother and powerful Secretary Gotabhaya Rajapaksa? The writer concerned is a regular contributor to the Defence Ministry website and on numerous occasions has written articles attacking minority communities in Sri Lanka. The Military Spokesman personally circulates these writings to his electronic database of correspondents, suggesting they be read. Many of these writings do not appear in any other publications and therefore are likely commissioned specifically for use in www.defence.lk, the official website of the MoD.

What choice do we have but to surmise that these writings are reflective of the thinking of the Secretary and Minister in charge of the Ministry?

Inquiries have been made into farces under the Rajapaksa regime. The military investigation into the killing of three innocent young boys in Weliweriya never saw the light of day. The Brigadier in charge of personnel carrying out the Weliweriya massacre has been given a plum diplomatic posting, probably by the same individual who ordered the army officer to carry out this heinous crime. What happened to the President’s noble claim after the ethnic riots targeting Muslims at Aluthgama that those responsible for that crime will be punished irrespective of their association and rank?

President Rajapaksa is in an unfortunate situation. He has lost control, not only of his brother the de facto minister of defence, but even his young offspring whose illusions of grandeur and blatant disregard of the norms and traditions of civility are setting new precedents in the impunity and indulgence afforded to inexperience young political adventurers.

With a popular Sri Lankan singer in toe, young Namal Rajapaksa took a tour of girls’ schools in Colombo recently to ‘promote’ rugby among schoolgirls for his sports club Carlton. Inside the once venerated premises of some of the country’s best educational institutions that always prided themselves on the highest standards of discipline, the MP and the pop artiste led these impressionable young ladies clad in school uniform to sing inappropriate lyrics and behave like groupies at a musical concert. The despicable display was made in full view of school principals and teachers, to the great shock and disgust of past pupils, parents and wider society. Rajapaksa juniors are being permitted to turn hallowed educational institutes in this country into circuses, promoting their shallow, racing car values among the next generation.

We appeal to all religious and community leaders in this country to take note of this degradation of values and unprofessional, juvenile handling of matters of state. The time has come to end this circus. To President Rajapaksa we say, rein in your family. He cannot continue to call himself the ‘loving father of the nation’ when he and his kith and kin are intent on destroying the very values Sri Lanka once embodied.
[Photo: funeral of one of the three innocent young boys killed in Weliweriya]