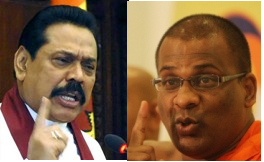 Blaming govt. for failure to protect religious minorities: Another NGO project to tarnish Sri Lankas image – President
BBS threaned to  turn themselves into an unofficial armed force to clear the country of prayer houses
President Mahinda Rajapaksa has alleged that those seeking to destabilise the country were now accusing the government of causing religious tensions. Addressing an UPFA propaganda rally at Galle on Wednesday, President Rajapaksa said that it was the latest NGO project directed against Sri Lanka during the ongoing sessions of the United Nations Human Rights Council (UNHRC) in Geneva. The President stressed that there was absolutely no basis for allegations that religious minorities were being targeted in the post-war era.
The war, the President said had been waged against the LTTE not the Tamil speaking people, the majority of whom were living outside the Northern and Eastern Provinces.
The President who is also the SLFP leader was responding to a report commissioned by the South Asia Policy and Research Institute (SAPRI) that dealt with what former President Chandrika Kumaratunga alleged was government backed campaign against Hindu, Muslim and Christian religious places of worship. CBK lambasted the government for turning a blind eye to what was going on in the country, after having met UNP National Leader Ranil Wickremesinghe at the Opposition Leader’s Office in Colombo.
Turning towards Buddhist, Hindu and Catholic priests on the stage as well as followers of all religions at the rally, he said the make-up there itself showed that there was no basis for what those trying to cause trouble for the country were propagating.
The SAPRI inaugurated its project on January 28, 2014 at a political event held at the Sri Lanka Foundation Institute (SLFI). Among those present on the occasion were Ms. Kumaratunga, Tamil National Alliance (TNA) leader R. Sampanthan and Deputy Indian High Commissioner, P. Kumaran.
Ms. Kumaratunga earned the wrath of UPFA constituent, the Jathika Hela Urumaya (JHU) as well as Bodu Bala Sena for spearheading the SAPRI attack on the government of Sri Lanka. Both JHU and BBS yesterday addressed the media regarding the unsubstantiated allegations directed against the country. They pointed out that Mrs. Kumaratunga launched the SAPRI report in the wake of UPFA constituent, the SLMC alleging systematic attacks on Muslims. They pointed out that the SLMC leader, Rauff Hakeem went to the extent of calling for UNHRC intervention to save Muslims.
The BBS alleged that both Minister Hakeem and Ms. Kumaratunga were following an agenda extremely inimical to national interest.
JHU spokesperson Nishantha Sri Warnasinghe, who is contesting the forthcoming Western Provincial Council on the UPFA ticket, said that anti-Sri Lankan elements shouldn’t be allowed to undermine the country especially at a time a section of the international community was working overtime to destabilize the country.
National Freedom Front (NFF) leader Wimal Weerawansa, MP, too, alleged that Minister Hakeem had collaborated with those bent on subverting the country. The NFF leader said that the SLMC leader had obviously contributed to the UNHRC Chief Navi Pillay’s damaging report meant to justify international war crimes investigation over accountability issues.
The Island
BBS takes on CBK Demands she reveal funding source for SAPRI report on Sri Lanka Calls her an ‘enemy of Buddhism’
BBS takes on CBK Demands she reveal funding source for SAPRI report on Sri Lanka Calls her an ‘enemy of Buddhism’
The Bodu Bala Sena (BBS) on Thursday (13), called former President, Chandrika Bandaranaike Kumaratunga, an enemy of Buddhism and demanded to know the funding source of a report on Sri Lanka.
They said, if the present regime does not take measures to control the growing scourge of prayer centres operated from homes, the BBS would turn into an unofficial armed force to clear the country of this menace.
Dilantha Withanage, Executive Committee Member and Programme Coordinator, BBS, said: “The report of the South Asian Policy and Research Institute (SAPRI) tries to nationally posit and internationally establish, Sinhalese Buddhists as inhumane people. The Chairperson of SAPRI, Kumaratunga, is living off the people, using their money, by maintaining an office and vehicles.”He demanded to know: “From where has this new found love for Sri Lanka come, and why has it come in the form of religious reconciliation? Where was she when the Liberation Tigers of Tamil Eelam (LTTE), bulldozed Buddhist sites in the North, or when the Dalada Maligawa was bombed? Why hasn’t she reported the destruction of Buddhist museums in the Maldives and the slaughter of Buddhists in Bangladesh?”
He further stated: “Kumaratunga is trying to destroy Buddhism by isolating the Sinhalese Buddhists internationally, in order to obtain overseas funds to please certain parties. We challenge her to prove who funded the report by this non-governmental organization (NGO), how much was granted and how the money was utilized, in addition to the research methodology that was used. Her one-sided report has consequences and repercussions for our country, and in fact when she met Opposition Leader, Ranil Wickremasinghe, he too had told her that the report would have been better if the injustices committed on Buddhism, Buddhists and Buddhist monks were also included. This is all a conspiracy.”
Chamila Liyanage, Chief Coordinator, Education and Research Unit of the BBS, said: “Kumaratunga is an invalid figure who is trying to regain her social stature. Her report contains only alleged injustices meted out to Hindus, Catholics, Christians and Muslims. She, along with Dr. Kumar Rupesinghe, the Executive Director of the National Peace Council (NPC), Jehan Perera and the Centre for Policy Alternatives (CPA) which is always breathing life in to the slain LTTE Leader, Prabhakaran’s mummy, the Berghof Foundation and other NGOs are of the same ilk, cut from the same cloth. They along with the Scandinavian puppet politicians espouse a diluted form of multi-faith, multi-culturalism and separatist politics. Constitutionally, Buddhism is the primary religion of the country.”