Politically speaking, ‘a plague on both your houses’ – Kishali Pinto Jayawardene 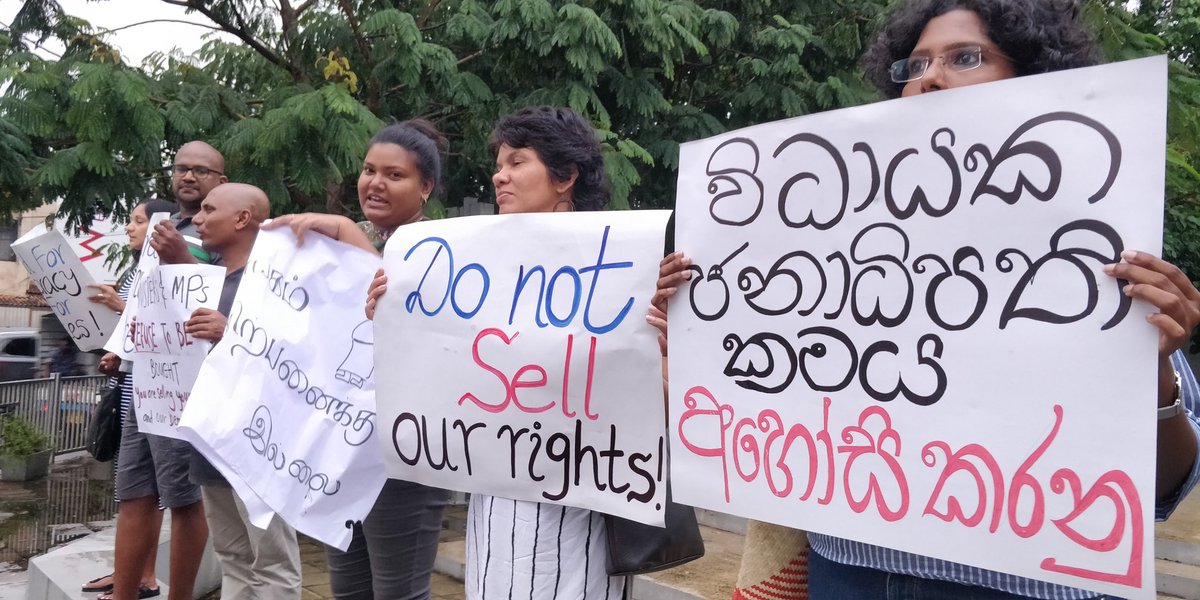 Continuing his swift disastrous strike last Friday, President Maithripala Sirisena has taken a familiar problem of public fury with an inept and malfunctioning Government to a perilously extra-constitutional trajectory, prompting deep revulsion on the part of even those strongly critical of many follies of the United National Party (UNP).

Repercussions of the President’s actions

This step was prompted by fiendish legal advice by whom the President referred to as ‘neethi visharadayo’ (legal experts). It is safe to presume that this supposed expertise is perchance heavily influenced by pedestrian considerations of power and position rather than with the niceties of constitutional law. Chaos has been unleashed on a bewildered public as global consternation continues to rise. Harsh international repercussions seem certain if Sri Lanka remains suspended in a state of democratic limbo. Regardless of which ‘Prime Minister’ wins the day when Parliament is finally convened, this will have lasting inimical impact.

Within the country, there is only so much abuse that a beaten and battered democratic system can take. Internationally, the extreme fragility of the country’s democratic state is showcased in unflattering international headlines. All that is not to the good. But even as fury is heaped (justifiably) on the President’s head, the UNP’s part in bringing about this veritable constitutional cataclysm must be put on record. As such, it must do far more than merely apologise for putting forward Maithripala Sirisena as the common candidate in 2014/2015. This week’s flippant explanations for the ‘small mistakes’ it made will not do.

Central to this responsibility is its arrogant and secretive decision-making by a few, from unwisely expansive constitutional  reform to asinine economic policies, in complete disregard of the public mood whilst increasingly isolating and humiliating the President. Even with all the aggravation, it must not be forgotten that the President who catapulted the country into chaos last Friday was the same President who voluntarily decreased his constitutional powers in 2015. The change between then and now, is only in part due to hardening of party positions on both sides.

Factors having a bearing on the crisis

First, continuously ‘speaking down’ to a President and deliberately keeping him out of core decision-making processes, despite the fact that he held the power of prorogation of Parliament in his hands was a monumental miscalculation. Indeed, when satisfying themselves that the 19th Amendment suited its particular political chess games, its scornful assessment would have been that Maithripala Sirisena of Polonnaruwa would not have had the audacity to prorogue the House without the advice of the Prime Minister or the Speaker. But that is precisely what he did, albeit to the great detriment of the country.

The second but equally important factor impacting on the crisis is the amateurish revision of the JR Jayewardene Constitution of 1978 by a 19th Amendment full of constitutional ‘holes’, so as to speak. While the circumstances of dissolving a Cabinet and dismissing a Prime Minister are unambiguous in the English and Sinhala versions as discussed in these column spaces last week, these provisions are hedged around with clumsily phrased clauses that create unworkable situations. What we see today is a classic illustration of that unworkability, explosively aggravated when two men who remain insecure in different respects occupy diametrically confrontational political spaces and a third man (Rajapaksa) who in all fairness cannot be said to suffer from insecurity in any sense of the word, capitalises on the vacuum with typical political opportunism.

Meanwhile President Sirisena has tried to justify his tumultuous actions by recital of a long list of woes against the UNP in an address to the Nation including personal and ‘cultural’ differences. The address had a contrary effect if the President meant to justify his actions. The alleged assassination plot against the President is one illustration. Common sense dictates that  the executive President surely should have led the investigation through his handpicked state officers if he was dissatisfied about the conduct of the police, not sworn in a new Prime Minister whom he had once accused of trying to put him underground.

An extraordinary step into an unknown void

Other complaints struck a chord of popular empathy such as the sidestepping of the President in the Government’s decision making process and referencing of the Central Bank of Sri Lanka (CBSL) bond scam. I have said repeatedly in these column spaces that the UNP stands twice condemned in regard to the CBSL scandal; first by the perpetuation of the actual scam itself and secondly by its determined efforts to cover this up by parliamentarians in the ‘footnote clique’ who now protest that their constitutional rights have been violated.

But these are old complaints. A day later, the ‘yahapalanaya’ Prime Minister Ranil Wickremesinghe refuted the allegations. But taking the address by itself, was the sum total of these presidential grievances reason enough to propel such an extraordinary step into the unknown darkness of extra-constitutionalism? Surely President Sirisena knew that this would be the result, regardless of what his shadowy ‘experts’ had to say?

Enormously difficult times lie ahead. On the one hand, it is difficult to believe the promises of the Rajapaksa-led SLFP that it will reform, given the resurgence of  thuggery and violence since last Friday. On the other hand, the UNP may be advised to refrain from moralistic bombast regarding ‘sacred constitutional and legal obligations’, which it has been quick to indulge in when pressed against the wall. This rings hollow in the face of its unscrupulous manipulation of the constitutional document since 2015, its utter failure to bring corruptors of the previous regime to justice when it had the chance and the misdeeds of its own corrupt deal makers. We will not be gullible enough to fall for these wide-eyed protestations twice-over.

Even so, the issue before Sri Lanka today is very clear. This is very simply a case of constitutional propriety of the President’s actions, not sympathy for the UNP struggling in political quicksands of its own making. That is the sole reason why protests must ensue with vim and vigour. We can only look at what is unfolding before us with disgust and proclaim ‘a plague on both your houses’ with considerable force, even as Shakespeare’s chagrined Mercutio did against the feuding families of Montague and Capulet.

The UNP and the SLFP have held Sri Lanka hostage to their ambitious games for far too long. As differentiated from India’s post-independence leaders of conscience motivated by genuine concern for the country, (despite some exceptions), here we have narrow, parochial and provincial thinking by small men with petty minds. This has degraded the land of our birth and dragged it to the depths of economic, social and political ruin.

Enough must surely be enough.