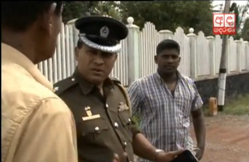 Gampaha ASP Chandana Kodithuwakku has allegedly forced a group of activists to abandon a vehicle parade to spread awareness regarding the drinking water issue in Rathupawala.
An organization for the protection of water had organized a vehicle parade today (13), to educate the public regarding the Rathupaswala water crisis, after the glove factory at the center of the recent controversy in Welieriya had decided to recommence operations.

However, before the parade had commenced ASP Chandana Kodithuwakku had arrived at the location and prohibited them from engaging in the parade while warning that the vehicles involved in the movement would be severely damaged, Ada Derana reporter said.

He added that the senior police officer asked them not to come back to the police station complaining over the damages caused to vehicles while warning that those forcefully engaging in the parade would be arrested.

The convenor of the organization, speaking to reporters at the location, said that another group was scheduled to join the motor parade from Biyagama and that, however, they were threatened with firearms last night.

When Ada Derana contacted the Police Spokesman’s Office, to inquire into police intervention to halt the vehicle parade, an officer said that no information has been reported so far on the matter and that they are looking into it.

The controversial Dipped Product glove manufacturing factory in Weliweriya was reopened for a period of 6 months with conditions, following a discussion held on Thursday (10) between the concerned parties.
Watch video here
AD