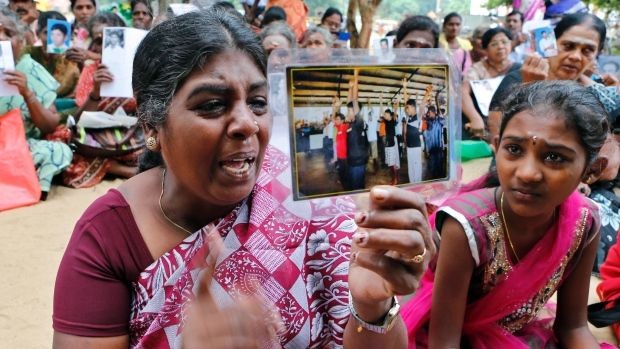 DUE PROCESS OF LAW MUST PROTECT THOSE WHO SEEK THE MISSING

International Day of Victims of Enforced Disappearances was marked on August 30. On this day, families of disappeared persons in Sri Lanka, and friends and activists, gathered in Vavuniya in the North, to once again publicly appeal to find the missing persons, at least know the truth of what happened to them, and hold those accountable to justice.

Previously in March this year, several Human Rights Defenders were arrested. Several of them were subsequently released following local and international protests. But one of them, Balendran Jeyakumari, continues to languish in prison. She has been a leading campaigner for the rights of those who have gone missing during the war, and of their families. Jeyakumari is a victim herself who lost three of her four children in the war. Two of them were killed in the course of the war. The third, a boy aged 15 at the time he went missing, is alleged by her to have been taken into government custody. Her remaining child, a girl aged 13, has been pictured in the media carrying the photograph of her missing brother, and asking for her brother’s return.

The arrest and detention of Balendran Jayakumari under controversial circumstances and without being brought to trial, raises the question whether those who speak out on behalf victims of the war are being targeted for arbitrary punitive action. Due process of justice requires that the suspects should be tried before courts without being held for long periods under detention.

The Prevention of Terrorism Act, which is a widely criticized law, allows individuals to be detained for up to 18 months without charge. But it was for use during the war. Today, Jayakumari is detained under the Prevention of Terrorism Act for over five months by a court order and languishes in the Boosa detention centre which is at the other southern corner of the country.

We note that the army spokesperson has been reported as saying “Jayakumari was taken into custody for harboring an armed criminal wanted in connection with an ongoing investigation. Her young daughter was also taken into protective custody as there was no adult in the neighbourhood willing to give shelter to her.” If so she can be charged in courts.

But so far, to our knowledge, no credible evidence has been produced by the government to substantiate the allegation against her that she was involved in aiding and abetting the purported LTTE revivalists who were shot death by the military in April. Indefinite detention without charges gives rise to the reasonable suspicion that Jeyakumari is being penalised, deprived of her fundamental rights, for speaking out on behalf of those families seeking the whereabouts of their missing loved ones.

Jeyakumari’s ongoing detention by the government continues to send a chilling message to Sri Lankan human rights defenders that their activism may be punished with similar arbitrary action. We also concerned for Jeyakumari’s mental wellbeing and physical safety as allegations of torture are being made against the law enforcement officials. It is this type of ongoing human rights violations that drive many people to support the call for a credible and independent UN investigation into what happened in the last phase of the war, and continuing human rights violations at present.. The arrest of Jayakumari can conceivably be portrayed as an attempt to cause fear among victims of the war who have not had any relief from the State and may wish to take their cause before the UN Inquiry.

In view of the disputed and controversial nature of the facts, the National Peace Council appeals to the National Human Rights Commission to look into this case and any other similar cases where persons are detained under the Prevention of Terrorism Act without being brought to trial. We also believe that the abuse of the Prevention of Terrorism Act to detain persons to intimidate and silence them highlights the need for its repeal and re-affirms the citizen’s right to speak out and campaign for human rights and justice.