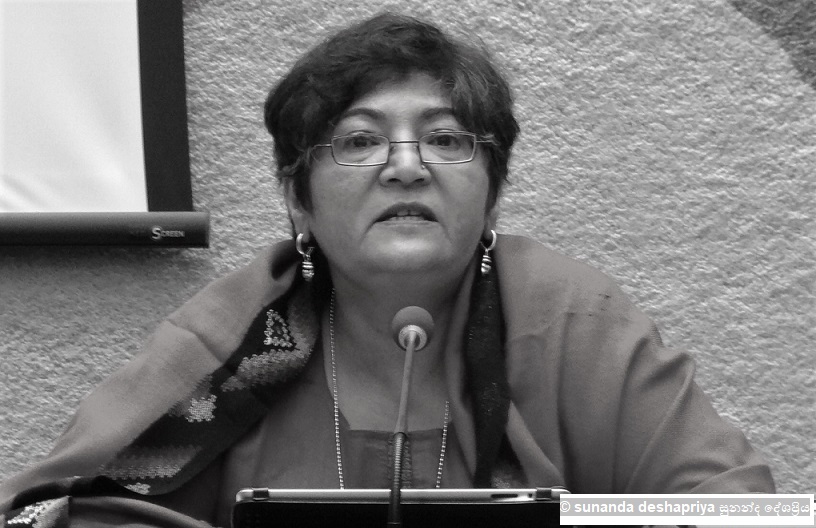 Johannesburg: The appointment of the war-time police chief to the Office on Missing Persons (OMP) in Sri Lanka completes the militarisation of this transitional justice mechanism established under the previous government. The move obliterates any chance of truth and justice for the Families of the Disappeared, says leading transitional justice expert, Yasmin Sooka, regarding the appointment of former Inspector General of Police, Hapu Arachchige Jayantha Shantha Kumara Wickremaratne, approved by parliamentarians on 20 May.

“It’s hard to make this up – the man who was in charge of three police units named by the United Nations investigation as involved in mass enforced disappearances at the end of the war is now investigating the disappearances himself. This is a top state official who is at risk of universal jurisdiction cases if he travelled abroad for his command role in gross violations of human rights like systematic police torture,” said Ms. Sooka, the Executive Director of the International Truth and Justice Project.

The Office on Missing Persons is charged with investigating the fate of tens of thousands of
missing and enforced disappeared in a country said to have the second largest case numbers in the world.

“We will be writing to the UN Peacebuilding Fund2 and international donors asking them not to fund such a body that has become so compromised and also sending relevant United Nations entities and member states a confidential dossier on the problematic appointments,” said Ms. Sooka. “We urge victim communities inside and outside Sri Lanka to write to the UN and other donors to urge them not to use their tax money to finance what has become a vehicle for impunity designed to cover up the Sri Lankan government’s past crimes.”

Already, the earlier appointment of Justice Upali Abeyrathne as the Chair of the Office on Missing Persons was described by victim families in Sri Lanka as  “a direct insult and an act of violence 3″.

Justice Abeyrathne was chair of a presidential commission established by President Gotabaya Rajapaksa on alleged political victimisation which the UN High Commissioner for Human Rights said had “obstructed and intervened in judicial proceedings on several “emblematic” human rights cases, including disappearances”. The UN said his appointment to head the Office on Missing Persons seriously undermined the body’s independence and credibility and its ability to function effectively4.

The Office on Missing Persons is one of two transitional justice bodies established in Sri Lanka; the second being a Reparations Office intended to support victims5.

The Office of Reparations has also now been militarised by the appointment of the President’s close ally, Major General (retired) Waduge Palitha Piyasiri Fernando, to the body. A presidential commission set up under the last government recommended Major General Fernando, and Gotabaya Rajapaksa, should be charged6 for their alleged role in corruption and misappropriation of funds amounting to US $62 million in a floating armoury contract7.

That commission added that Fernando should also be barred from holding public office in future. However after the change of government in 2019, President Gotabaya Rajapaksa established another presidential commission to examine the political victimisation of his allies. This commission found in favour of Fernando who alleged8 that the previous government’s Bribery Commisssion had fabricated the evidence against him. Before he was exonerated by the new presidenial commission, Fernando was appointed secretary to a state ministry9. Additional charges against Fernando for more than seven thousand firearms violations connected to the same case were also dropped shortly after the change of government in 201910.

“Reparations could involve large sums of money for Tamil victims of the Army and yet here we have the militarisation of the transitional justice mechanisms, with an individual in the
reparations body who has been extensively investigated by police, in a process previously
supported and found credible by the international community, for allegations of corruption that have not been tested and properly refuted in a court of law,” said Ms. Sooka.

Meanwhile, one of the colleagues of former police chief, Jayantha Wickremaratne, Chandra
Nimal Wakista, has been appointed to the newly composed Bribery Commission11. Wakista ran the police Terrorism Investigation Division in 2009-10 – a unit the UN said was responsible for systematic torture.

“Families of the Disappeared in Sri Lanka cannot safely engage with transitional justice
mechanisms that include the same security officials in power at the time the violations took
place. The very existence of these bodies poses a major witness protection risk,” said Ms. Sooka.