Myanmar has happened. Are we next? Does it need to? – Dr. Paikiasothy Saravanamuttu 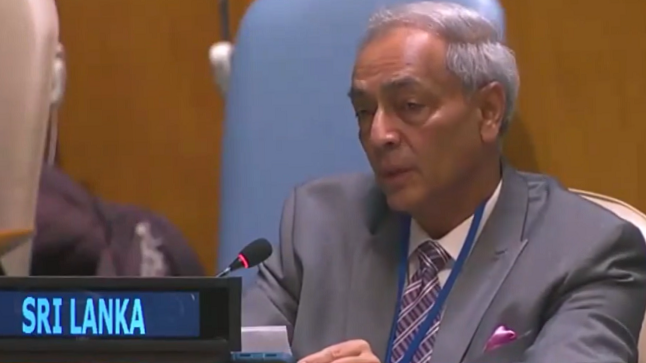 “It appears today that the vanquished…it appears that terrorist groups and terrorism is making use of very civilised mechanisms to unleash a different kind of terrorism. To walk themselves into the very mechanism that protect a civilised world.

“Should our mandates extend to interfering with local processes such as perhaps an exercise in a change of regime which is being critiqued in a recent report form the human rights council.”

As we mark the 73rd anniversary of our independence, the two extracts from an exchange in New York before the United Nations exemplifies the situation Sri Lanka finds itself in.  Whilst the Permanent Representative Peiris quite brazenly equates the Office of the High Commissioner for Human Rights (OHCHR), victims groups and human rights organizations as tools of “vanquished terrorists” in front of the General Assembly, the Secretary General of the United Nations gives him a primer in contemporary international relations, pointing out that if the Sri Lankan people and government take reconciliation and accountability seriously, the interest of others doing so in respect of Sri Lanka, will be reduced. We surely belong to the international community and belonging does not mean that we have the liberty or the license to cherry pick our commitments and responsibilities. States have moved; we are in the twenty-first century; they are no longer stuck in the Westphalian world of 1648!

Geneva is upon us as is Independence Day. The High Commissioner has issued her strongest and most hard hitting report yet, encouraging states to consider action under universal jurisdiction, targeted travel bans and freezing of assets of individuals credibly accused of grave violations as well as action in the International Criminal Court (ICC). The High Commissioner also points to the treatment of Muslims highlighted by the odious burial/cremation controversy, the steady militarization of governance and government, the damage wrought by the 20th Amendment and with reference to the Presidential Commission on Political Victimization, the compromising of the integrity of the judiciary.

The government’s initial response was to appoint Presidential Commission to look into what previous commissions recommended and this too on the eve of the Human Rights Council sessions in Geneva. It is worth noting that the Mahinda Rajapaksa regime’s Lessons Learnt and Reconciliation Commission (LLRC) reported back in 2011. The reason for the delay is apparently the Covid-19 pandemic and the delay in holding a general election – two factors that did not inhibit the regime establishing two Presidential Task Forces, one for a disciplined and righteous society and the other for the Management of Archaeological Sites in the Eastern Province. Moreover, the accusation has been made that the HRC is stacked with states from the Global North, flying in the face of the representativeness of the Council and the well known fact of the High Commissioner being from the Global South, a former President of Chile and a victim of human rights violations – her father was tortured and killed by the Pinochet regime.

It would seem that some sanity may prevail and the regime may consider a consensus resolution in the Council, having earlier on withdrawn its co-sponsorship of the existing resolution. Were this to be the case, there will be no vote amongst the 47 members of the Council and the regime will have bought itself more time, begging the question as to what for? A probe like in the Sunil Ratnayake case, where he slit the throat of a five year old, was convicted by every court in the land, only to be pardoned by the President?

At the same time the other measures recommended by the High Commissioner can be pursued, however difficult they may seem. In particular with regard to a referral to the ICC, given the Russian and Chinese veto which would come into play in the Security Council, as Sri Lanka is not a signatory of the Rome Statute.

Internationally, Sri Lanka appears to be unreliable or incompetent, woefully volatile, introverted, confused and bereft of policy except for taking direction and capitulating to the pseudo-patriot and myopic alliance of trade unionists and monks.

We have ditched the Millennium Challenge Account grant, the Japanese Light Rail deal and now the Eastern Cargo Terminal agreement with India and Japan. We are now offering them the West Terminal.

At the same time, the High Commissioner of Human Rights has produced the most damning account of the situation of human rights in the country. The once super performing stock market has now recorded serious losses and we are still in denial regarding going to the IMF – the lender of last resort.

Domestically, the alliance of monks and military hold sway, the strong and meritocratic patriots who in terms of corruption and the rule of law are deafeningly silent on the steady militarization of government and governance and the shenanigans of presidential commissions and task forces that threaten the integrity of the judiciary.  Are we back with a vengeance to the era of the denial of civic rights? As for space for civil society activity, it is being surely and steadily shrunk by the inquiries of the security forces, the work and presence of task forces.  Myanmar has happened. Are we next? Does it need to?

On the 73rd anniversary of its independence, Sri Lanka faces a real and present danger to its democracy, its democratic institutions and processes. Post 20th Amendment, we have an over-mighty executive president and post the August 2020 general election he and his regime have a two- thirds majority in parliament. I leave it to the reader to decide as to the state of the judiciary in light of the burial/cremation controversy, the holding of elections before that, the contempt of court issue and the presidential commission on political victimization. There are some 28 former and serving military officers in key positions in government. It is of little wonder that they have not been appointed to manage economic affairs.

Perhaps that time too will come…

And to cap it all, why have we established diplomatic relations with Liechtenstein?

Original Caption Sri Lanka at 73 – Reaching Out to Liechtenstein! (GV)