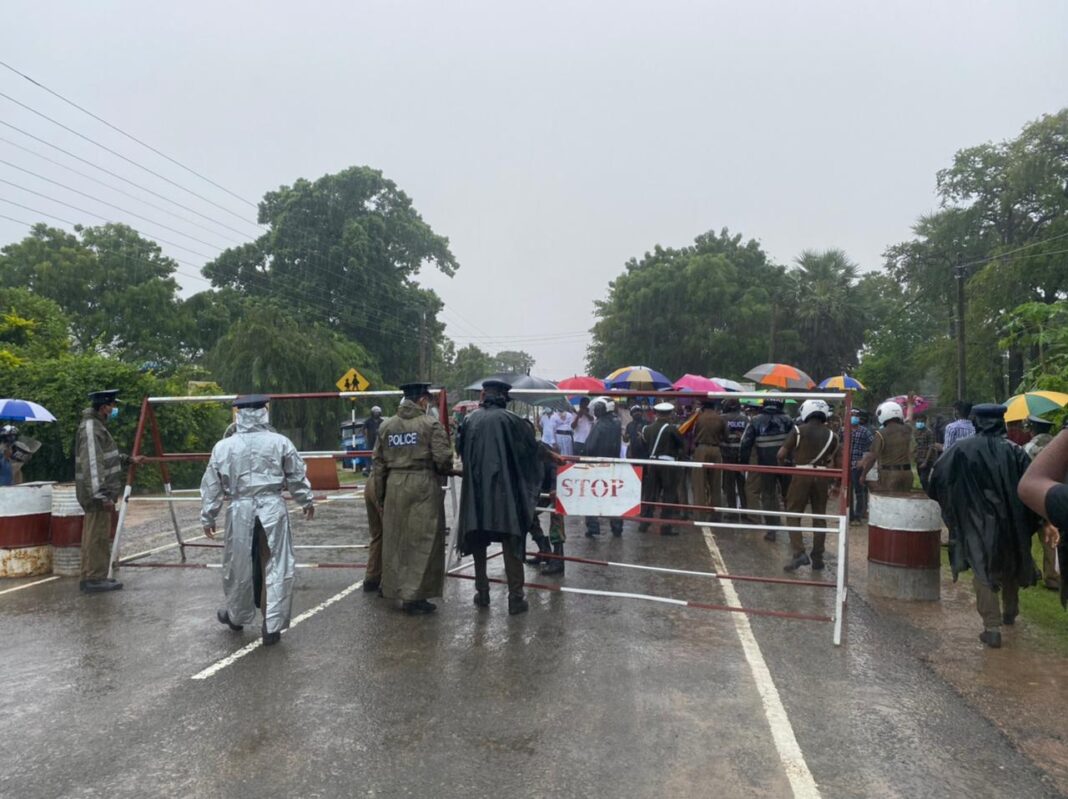 The police has requested the Kalunvanchikudy Magistrate in the Eastern Province to ban protests for ‘instigating the UNHRC to act against Sri Lanka’, ‘turning people against the Sri Lankan Government’ and for encouraging ‘communal disharmony’ and the Magistrate has complied.

The police requests the Kalunvanchikudy Magistrate in the Eastern Province to ban protests for 'instigating the UNHRC to act against Sri Lanka', 'turning people against the Sri Lankan Government' and for encouraging 'communal disharmony' and the Magistrate has complied. (1) https://t.co/1AdyftterZ

Meanwhile, Vavuniya Magistrate Court imposed a ban on demonstrations and hunger strikes planned by Tamil families of the disappeared to mark Sri Lanka’s Independence Day as a day of protest, reports Tamil Guardian.

The court injunction has banned all forms of protest against Sri Lanka’s 73rd Independence Day and any activities that will draw attention to the upcoming United Nations Human Rights Council (UNHRC) session in Geneva from taking place from February 3rd to February 6th.

“The ban requested by the police commissioner with regards to the conduct of agitations, demonstrations around the commemoration of the members of the proscribed Liberation Tigers of Tamil Eelam (LTTE) organisation and the release of political prisoners on the basis of the Criminal Procedure Act 1979, Section 106 (1) has been submitted to the court,” the order outlined.

In its ruling, the magistrate court cited COVID-19 as a pretext to forbid the protests by the families of the disappeared, claiming that an agitation or demonstration in front of the Vavuniya Old Bus Stand, the A9 Highway or near the Post Office or the Police Station, would cause damage to public health in light of the coronavirus pandemic.”

Members of the Association of Relatives of the Disappeared, including Shanmugaraj Sarojadevi and Kasipillai Jayavanitha, have been specifically banned from participating in any demonstrations under Section 106 (1) of the Criminal Procedure Act, 1979. The jury has postponed further discussion of the case to February 15.
TG

Sri Lankan magistrates across districts in the North-East issued bans and injunctions against civil society members, journalists and other individuals ahead of a ‘walk for justice’ organised by Tamil war victims’ families, civil society organisations and Tamil politicians.

The protest march, which mobilised around demands for the United Nations and international community to heed Tamil calls for justice and accountability, began today from Pottuvil despite the imposed restrictions, roadblocks and police interference.

The walk, which coincides with the Sri Lankan independence Day celebrations, has been named after the its route from ‘Pottuvil to Polikandi’, delineating the two furthest ends of the traditional Tamil homeland, from Pottuvil in Amparai in the south, to Polikandi in Point Pedro at the northern tip.

The magistrates have issued the bans following pressure from Sri Lankan police, who cited multiple differing reasons in an attempt to disrupt the organised peaceful processions.

The Jaffna Magistrates Court banned all protests for 4 days between February 3rd to February 6th. Stay orders were issued to multiple individuals after an application was filed by Jaffna and Kopay police to the Jaffna Magistrates, citing reasons of public harassment and violations of COVID-19 guidelines.

However, Mallakam Magistrates Court has postponed the hearing for the case filed by the local police, requesting them to produce a Ministry of Health report substantiating claims that the protests will extend COVID-19 spread. Chunnakam police officers filed an application seeking an injunction against the protest but the hearing was adjourned until Friday, citing that a report from the responsible Health Medical Officer needs to be produced. Applications submitted to the Mallakam Magistrates Court by the Achuveli and Kankesanthurai police were also postponed until Friday. The applications submitted by the police cited reasons for the injunction were public nuisance, violations of COVID-19 guidelines and attempting to smear Sri Lanka’s image ahead of the upcoming United Nations Human Rights Council (UNHRC) session in Geneva.

The Mannar Magistrates Court issued an injunction on Wednesday from February 3rd to February 6th, against the ‘Pottuvil to Polikandi’ walk going through the Mannar district, citing COVID-19 violation risks as the reason. Mannar police filed an application to the court seeking an injunction specifically against at least 14 individuals taking part in the peaceful ‘Pottuvil to Polikandi’ walk, stating they should not be able create demonstrations against the Sri Lankan Independence Day or ones that would ‘create ethnic tensions’. (ITAK) leader Mavai Senathirajah, Jaffna mayor Visvalingam Manivannan and other Jaffna parliamentarians were issued with the court bans. Despite objections by lawyers insisting that the basis of the injunctions were merely speculative and that a democratic right to protest should be honoured they were rejected in favour of the police and a court ban was issued.

The Batticaloa police requested the Kalunvanchikudy Magistrate in the Eastern Province to ban protests for ‘instigating the UNHRC to act against Sri Lanka’, ‘turning people against the Sri Lankan Government’ and for encouraging ‘communal disharmony’ and the Magistrate has accepted this and issued a court ban. Tamil National Alliance (TNA) Batticaloa District Parliamentarian Shanakiyan Rajaputhiran Rasamanickam was served a court ban from Kalunvanchikudy Magistrate among others.