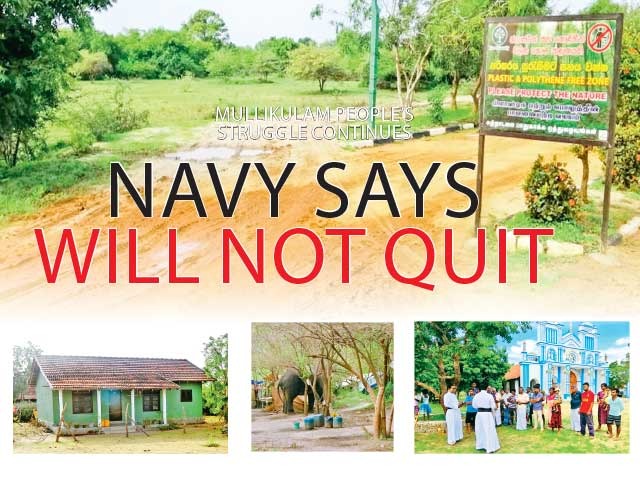 Mullikulam, bordering Mannar-Puttalam, adjoining the thickets of Wilpattu, was once a vibrant village with a school, post office, multipurpose cooperative outlet, agricultural lands and ponds by the sea where fishing was also thriving. Today it is dull and dry and the lives of the people there are hanging in the balance.

The people’s lives have changed after their land and houses have been taken to establish the North-western Command Headquarters and Naval Institute (SLNS Barana) in Mullikulam.

The matter has been reported many times by the Media, the local and international human rights activists and organizations, but the struggle continues. The Navy base welcomes anyone as soon as one enters Mulllikulam village. A well-maintained flower garden in the compound partly fenced with sandbags and empty barrels looks neat and tidy.

Then the road diverts to a sandy road by a Navy compound fence. The visitor may come across Navy officials watching over outsiders driving by the sandy road that leads to the 150-year-old, The Our Lady of Assumption Church that is located in a free land space.

Many families sleep on the corridors of the Church while some sleep inside the shacks put up in the jungle. There are children barefooted roaming about in the blazing hot sun staring at the strange people visiting them often.

Navy officials are wary of villagers telling their woes to visitors. They are aware then that these visitors would then walk into the thickets to see the shacks they live in. They are of the view that higher-ups have to give them the order to vacate the place. They cannot voice on behalf of the Tamils living in the open air nor voice against them.

That they are on a tour of duty there, is the plain truth. There is no clash whatsoever. Most of the villagers know many of the officials by their names and smile at each other. Villagers who live in the church premises rush to the fence pointing at the big houses, “That is my house.

Can you see? This is the house where I was born and I lived, thereafter with my children, says Newton (57) who becomes emotional. Parish Priest, Mullikulam, Rev Fr. Lawrence Leon has become the caretaker of the villagers. He has been dealing with all issues that come to his notice and at many times he is as helpless as the others. He says that the Navy built 27 houses for families elsewhere but those are built using cheap material and the floors and walls are cracking and falling apart.

“We live surrounded by the Navy. They are right around us. That is why even settling in the released 77 acre-land is technically a problem. There is no free movement to return there. How can we move there when we live in the middle and right around us is the Navy controlled area?”, the priest tells us.

He also says that the fertile land of the people has been taken away and people were moved out from their original land. They also lament that nearly 6,000 acres of land they traditionally cultivated is no more left for them.  Upparu where they were once fishing is now under the Wild Life Department.

Wild elephants walk right into the tents scaring the sleeping children and elderly who then run to the Church to take refuge.

Last week, due to heavy rains these people living in shacks tried to move to an elevated area to put up their tents but the Navy barred them.

Sahayawathi (58) says when the sea is close by we are asked to take a 5km walk to reach the sea in another area.

“The sea is at the doorstep but because of the Navy camp, we are asked to take the route through the jungle to fish. It’s not easy to travel when you are penniless.”

When asked about the houses built by the Navy, they say at that time we were voiceless. “We were scared to talk about these matters when the last regime was in power. Now it’s good governance.

We see the President speaking to the people openly. We hear he is a good man. That is why we are urging openly to return the land that is ours and the Navy can take back what was given to us by force.”

With the new demarcation of the Wildlife sanctuary, fishing in Upparu is prohibited. Three of the fishermen were caught fishing and produced at the Puttalam Magistrate who imposed a fine of Rs 40,000 each.

Ruberaj Peiris, Bartholomeus Dias, Dilokshan were slapped with fines they are unable to pay. They say they did not know the rule of the jungle and urged the Wildlife Department to withdraw the case. “We will be cautious the next time.”

“It’s now about 18 months since the Navy Commander committed to releasing 100 acres of land “immediately” out of which 77 acres have been released. The same day, the Navy Commander had also promised to release 27 houses they are occupying at the end of last year. This has still not happened,” the Father tells us.

He goes on: “I kindly request to ensure that the Navy keeps its promises made 18 months ago and release at least the 27 houses and remaining 23 acres of land as soon as possible and also release the 300 acres the Navy had ‘earlier consented to be released’ by the end of this year.

“On 18th July 2018, in sheer desperation to get back to their beloved lands, about 80 families moved to live in some of the released lands, even though these were forested and bushy areas. They face danger from snakes and elephants, as well as dust, sun and rainfall.

There are electricity lines nearby where they live, but they have no electricity and these exacerbate nighttime dangers. They have to go a couple of kilometers simply to have a bath and are dependent on minimal toilet facilities at the nearby Church and school.

He also tells that during a meeting in Madhu Shrine on 29th July 2018, President Sirisena had committed to the Bishop of Mannar to expedite the release of land and houses in Mullikulam village, that is under the control of the Navy. More recently, we have seen the President’s public promise to release all lands by the end of the year.

After 11 long years of displacement, people are hoping to resettle back in their own lands before Christmas and the New Year.

In 1990, approximately 100 of these families sought refuge in South India, while the remaining 300 (approx.) families were displaced and living in temporary shelters, or on rent or with host families/relatives. During the Ceasefire Agreement in 2002, many villagers returned to Mullikulam in 2003 and began their struggle to rebuild their lives, livelihoods and restore their destroyed houses and property.

On 8 September 2007, the people of Mullikulam were forcibly removed from their village by the Army, with the resumption of the war.

The villagers were once again internally displaced and the entire extent of the village was taken over by the Army overnight. The villagers were assured that they could return to their lands and houses within three days.

Nearly 11 years after, the people of Mullikulam have yet to be allowed to return home and the status of return remains indefinite.

Fr. Lawrence says some have accepted alternate land but, still hope to return to their own village someday.

They were resettled in areas near Mullikulam such as Kayakuli and Malankaadu despite the lack of basic facilities and infrastructure in those newly cleared forested areas. The majority of villagers, however, want the return of their own lands.