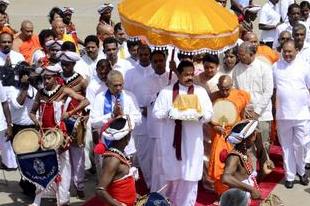 New Delhi has rejected a Sri Lankan Government request for a special exposition of the Sacred Kapilavastu Relics at Temple Trees.  The rejection, according to sources, has delivered a major blow to diplomatic relations between the two countries, already dented following the recent developments in Tamil Nadu.

Informed sources said President Mahinda Rajapaksa had made the request for a special exposition, through External Affairs Minister, Prof. G.L. Peiris, at a dinner hosted by the Indian High Commissioner, following the reception of the Sacred Kapilavastu Relics.

“The President had instructed Prof. Peiris to forward three demands to the Indian High Commissioner. One was to extend the duration of the exposition of the relics by another week and the second was to allow the relics to be taken to as many places as possible, so that a larger number of devotees will get a chance to pay homage. Thirdly, the President wanted Prof. Peiris to put forward the demand of taking the Kapilavastu Relics to Temple Trees for a special exposition,” the source said,  noting that the Indian High Commissioner had subsequently informed the External Affairs Minister that he needed to seek permission from New Delhi before conceding to any of the demands. It is learnt that New Delhi had responded immediately, saying the Indian Government  has no objections to the first two demands, but that it cannot permit  the sacred relics to be taken to Temple Trees.

A source from the Indian High Commission told Ceylon Today that the Indian Government had opposed the move on the grounds of Temple Trees not being a place of worship and that it is merely the official residence of the Prime Minister or the President. However, it is also being alleged that the Indian Government’s decision has been influenced by Opposition Leader Ranil Wickremesinghe, who had complained to the Indian High Commission that the Relics were being used to gain political mileage for the government. “The India Government too realized that the exposition of relics took place at a wrong time when the local elections are being held,” the source added. Minister of Indian Cultural Affairs, Minister Selja Kumari, accompanied the Relics to Sri Lanka and a dinner was hosted by her counterpart here, Minister T.B. Ekanayake. “The dinner too was put-off abruptly, saying the Cabinet Ministers were tight-scheduled, owing to the forthcoming election at that time,” the source said
CT