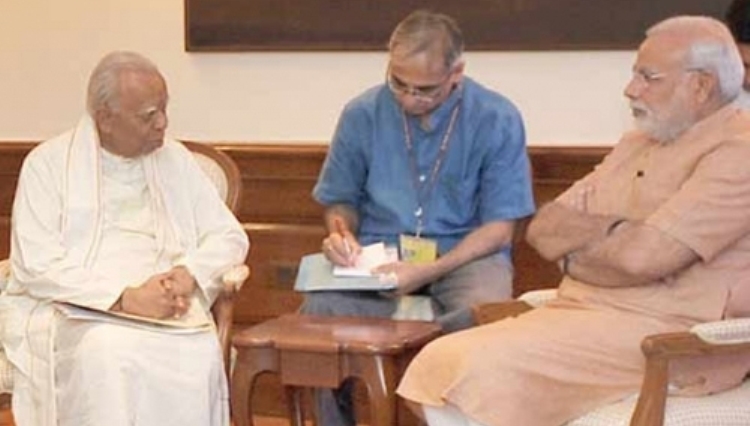 [Samapnthan in discussion with PM Modi]
By PTI–
CHENNAI: Tamil National Alliance leader and Sri Lankan MP R Sampanthan today alleged that the island nation government was not interested in implementing the 13th Amendment and was only impeding the functioning of the Northern Provincial Council.

“The government is not interested in implementing the 13th Amendment and is interested in blocking, impeding and restraining the functioning of the NPC,” Sampanthan, the veteran Lankan Tamil leader told reporters here.
Regretting that the Chief Minister is unable to even have his choice as Chief Secretary, he said, “that is the situation under which he is functioning.”

Alleging that the Governor was interfering with administrative and financial matters, he said, the gubernatorial authority had not even consented to a Bill seeking to set up a “Chief Minister’s Fund” intended to take up development work.
“The Governor is impeding his function. Our Chief Minister had been a judge of the Supreme Court. Their expectation is that he will resign, which he wont do,” he said.

Accusing Sri Lanka of settling Sinhalese people and militarising traditional Tamil regions, he alleged that their objective was to break the linguistic and cultural contiguity between Northern and Eastern Provinces.

“Their objective is also to change the demographic composition and change the cultural and linguistic identity of Tamil regions. The most urgent need is that this should end,” he said.

“It is their hope that if they continue with this, a political solution for Tamils will be irrelevant, a solution could become redundant and they can have their own way,” Sampanthan said.

On the Aug 23 meeting he had with Prime Minister Narendra Modi,he said the PM had stated he was committed to ensure that Tamils are able to live in Sri Lanka with self-respect,justice and in safety and equality, fulfilling their legitimate aspirations within the framework of a united Sri Lanka.

This was the position of “not only India, but the European Union and the international community and TNA as well,” he said.

Modi said he was committed to implementation of not only the 13th Amendment, but going beyond building upon it to ensure justice for Tamils, he said.

Modi said he was committed to implementation of not only the 13th Amendment, but going beyond building upon it to ensure justice for Tamils, he said.

“Modi has told us exactly what the government’s position is and he has also told President Rajapakse that commitments made to Tamils must be fulfilled,” Sampanthan said.

On certain views expressed by BJP leader Subramanian Swamy in Colombo recently, the MP said “he is entitled to his views..we need not be worried about that.”

On the Katchatheevu issue, he said, it was between the governments of India and Sri Lanka while on the Tamil Nadu fishermen issue, he said, the fishermen of Lanka and India should settle the issue through dialogue.
ET