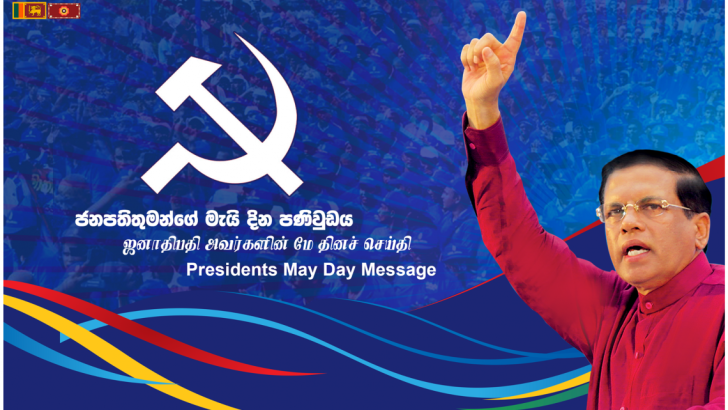 Image form Sri Lanka president’s media division shows the symbol of hammer and sickle as back ground to his may day message.

One would have thought that political parties here would use this year’s May Day platform to reach out to agitating contractual workers or government doctors. But Tuesday’s rallies turned out be almost entirely about political messaging by leaders to their electorates, preoccupying observers with which leader’s rally drew the largest crowd.

Much of this was centred on the rally organised by the Joint Opposition, a faction of the Sri Lanka Freedom Party (SLFP) that supports former President Mahinda Rajapaksa, at Galle Face, Colombo’s iconic seafront.

Compared to Mr. Rajapaksa’s earlier attempts to gather supporters in a public rally, Tuesday’s meeting saw a far bigger crowd, with people from the southern and central parts of the island flocking to the venue. Police sources estimated the crowd at over 1 lakh.

Simultaneously, the SLFP faction that President Maithripala Sirisena leads culminated in the scenic town of Kandy in the island’s Central Province. The crowd was smaller in comparison, observers said, attributing it to the rain there and the limits of the ground that was chosen as venue.

Describing his rally as a boost to the victorious forward march of the “SLFP-led leftist progressive forces in the country”, President Sirisena, who was a leftist in his younger days, vowed to transform the SLFP into a corruption-free, democratic political force.

Mr. Rajapaksa, on the other hand, resolved to protect Sri Lanka, especially from foreigners whom he accused of taking over the people’s land. His supporter and parliamentarian Wimal Weerawansa even called for a black flag protest to oppose Prime Minister Narendra Modi’s upcoming visit, because “they [the Sri Lankan government] are trying to sell Sri Lanka to India”.

The content of the rally aside, the crowd at Mr. Rajapaksa’s meeting became the talking point in Colombo circles, with many reading it as a strong sign of his possible comeback. However, analysts were sceptical.

The rally must be seen in the backdrop of the country’s complicated political reality, said Kumudu Kusuma Kumara, a senior lecturer at Colombo University.

While at one level the Rajapaksa camp showed its strength in organising, it is also capitalising on the growing dissatisfaction among the common people on the government’s economic programme taken forward by Prime Minister Ranil Wickremesinghe, he said. “Also, the nationalists see this government as having made Sri Lanka a playground for geopolitics of countries like India and China.”

Victor Ivan, former editor of Sinhala newspaper Ravaya , however, did not think much of the crowd. “It does not necessarily reflect popularity, it only reflects the kind of money these parties have. It is all about how much you can spend,” he said, adding that in reality Sri Lankans were tired of all the current leaders in power and opposition.

Wary of disregarding the crowd, Dr. Kumara said President Sirisena should use the opportunity to convince PM Wickremesinghe to rethink his “neoliberal economic reform agenda” and shift to a moderate, centrist social-democratic programme instead. Only that can help revive a mass support base crucial to defeat chauvinist forces, which are threatening to re-emerge, he added.