Mayhem As Monks Go On The Rampage

Ven. Galagoda Aththe Gnanasara Thera arrested on the charges of contempt of court, obstructing Court proceedings and intimidating a public servant was yesterday ordered to be remanded till February 9 after being produced before the Homagama Magistrate’s Court.

Ven Gnanasara Thera was taken to the prisons at around 5. 30 p.m. from Homagama court premises under the tight security of Special Task Force.

A tense situation erupted when Ven. Gnanasara Thera was about to be taken to the prisons. Members of the Maha Sangha numbering around 200 protested shouting slogans, when the prisons officials were taking the Thera out of the court premises.

They accused the politicians and pelted stones at the court officials too. Bottles and stones were also hurled by some protesting monks at Special Task Force personnel who were called in to defuse the situation.

Some Budshist monks were seen sleeping on the road blocking the movement of prisons bus which was to transport Ven. Gnanasara Thera to the prisons from the Magistrate’s Court premises.

However, the STF personnel managed to bring a cab to the court premises at around 5.30 p.m. amidst various obstacles and Ven. Gnanasara Thera was taken to the prisons under tight security provided by the STF and Prisons guards. Some of the Buddhist Monks tried to enter the court premises, but were prevented by Police. The Police later closed the gates to prevent the monks from entering the court premises.

However, several monks jumped over the wall and entered the court premises while other monks blocked the road preventing Ven. Gnanasara Thera from being taken to prison. 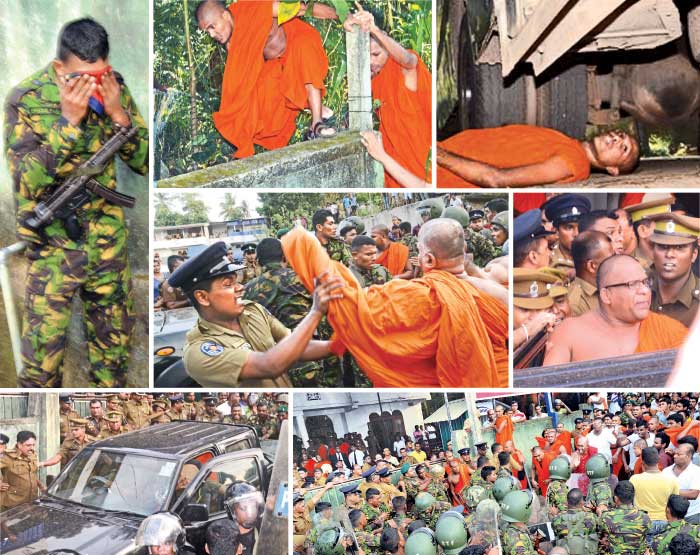 Around 300 police officers and the riot police with water cannon vehicles arrived at the Court premises to control the situation.

Meanwhile, while ordering Ven. Gnanasara Thera to be kept in remand custody, Homagama Magistrate Ranga Dissanayake observed that public nuisance would be created, if the suspect was released on bail since he had made a challenge to the Court’s jurisdiction.

Ven. Gnanasara Thera on Monday began to address Open Court after the court hearing pertaining to the disappearance of journalist Prageeth Ekneligoda was over.

Addressing the Court, Ven. Gnanasara Thera praised the Army officers’ role in eradicating terrorism in the country and reprimanded the government and the Attorney General Department’s Senior State Counsel for giving instruction to arrest Army officers in connection with Ekneligoda’s disappearance. While rejecting the suspect to be release on bail, the Magistrate observed that the suspect could be charged in the High Court and in the Court of Appeal as well on contempt of court charges. He directed police to conduct further investigations into the incident and seek the Attorney General’s advice regarding the matter.

Magistrate Dissanayake said the LTTE which is considered as world’s brutal terrorist organisation, did not even challenge the country’s judicial system.

Meanwhile, the Magistrate directed the Attorney General that a Senior State Counsel be appointed to look into this matter in accordance with section 136 of the Criminal Procedure Code.

Defence counsel Thushara Dissanayake appearing on behalf of the suspect told Court that his client did not have an intention to insult the Court and he was compelled to behave in such a manner after seen the tragedy of Army officers in connection with the murder of Ekneligoda. Homagama police had arrested the suspect and produced in Court.

Even at the time of this edition going to press yesterday afternoon, the ruckus at the Homagama court premises was continuing.