May 9 attack on GotaGoGama: Victims question the State on justice and accountability 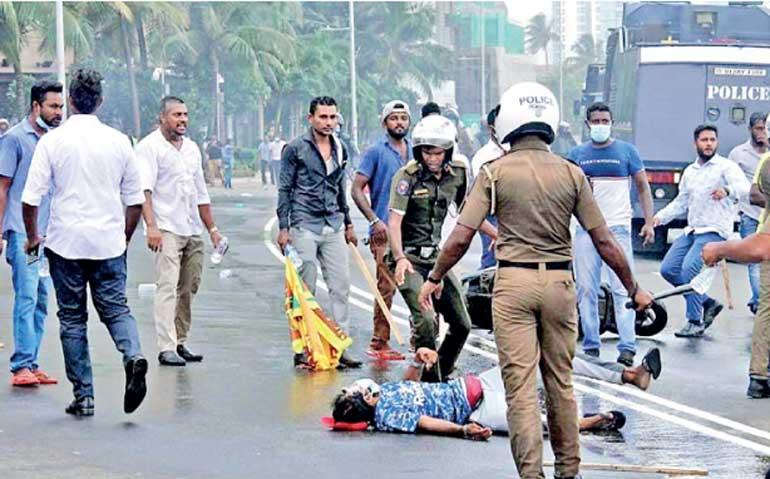 K. M. Indunil Senarath Bandara from Anuradhapura was a regular at GotaGoGama (GGG), the Galle Face protest site, volunteering at its Youth Centre. On May 9, whenGotaGoGama was attacked by unidentified mobs, Indunil became a target of the attackers, sustaining severe blows to his head and spinal cord; with the injuries sustained confining him to a wheelchair.

He recalls around eight people heading towards his tent, and identifies MP Milan Jayathilaka as being amongst them. “I was assaulted before I could run. I suffered severe blows to my head and spinal cord and I fell at that instance,” he reminisced.

Indunil is just one among many peaceful protesters who were attacked and sustained injuries, some serious, that day.

The GotaGoGama protest site came into being on April 9, 2022, providing a platform for the public to exercise their right to peaceful protest. It grew from a general discontent over the government’s mismanagement of the economy. This soon ballooned into a larger protest at the Galle Face Green. Among other demands, the protesters called for the resignation of President Gotabaya Rajapaksa, abolishing of the Executive Presidency, and an end to nepotism and corruption within the political hierarchy. Ironically, the protest, which came to be known as the ‘aragalaya’ or ‘struggle’ was held at the ‘Agitation Site’. But in the end, it was the protesters themselves who became victims of subsequent attacks.

GotaGoGama, which evolved into a mini township and community centre with numerous facilities including legal aid, medical aid, a media centre, youth centre, library and even an art gallery, cinema and college, remained a non-violent protest site until May 9, which was in fact a decisive day in the political history of Sri Lanka. It was the day former Prime Minister Mahinda Rajapaksa had reportedly decided to resign. But by 9.00a.m.that fateful day, many supporters of the ruling Sri Lanka Podujana Peramuna (SLPP), who were reportedly bussed in from Eheliyagoda, Moratuwa, Hambantota and various other parts of the country, gathered near the Beira Lake entrance of Temple Trees (Prime Minister’s official residence) and in what appeared to be an orchestrated move, urged Mahinda Rajapaksa to continue as prime minister. Video evidence of ensuing events indicates several SLPP politicians encouraging party supporters to attack and destroy the GotaGoGama protest site.

The hordes spilled out of the Temple Trees

Within hours, the hordes spilled out of the Temple Trees gates and what ensued was violent mayhem that transformed the once peaceful protest site into a battleground. Subsequently, many other violent incidents were reported from across the island, including the torching of buses carrying SLPP supporters and houses of politicians. It was indeed a dark day in the political history of Sri Lanka.

It was also a day that once again unravelled the government’s biases and its lopsided political priorities in meting out justice. For, as of September 2022, police statistics indicate that over 4000 people were arrested in relation to the arson and violence that spread across the country in the aftermath of the attack on GotaGoGama and around 1500 of them are in remand custody. This is in contrast to the miniscule number arrested for their involvement in the attack on GotaGoGama and subsequently released on bail.

Reports reveal that the bulk of the arrest was made particularly on charges of torching the houses of ruling party politicians.

Although there were video and eye witness evidence of prominent political figures marching towards the GotaGoGama protest site along with the armed hordes, it took a long time for the police to issue them notices to even record statements. Even though subsequently MPs Sanath Nishantha and Milan Jayatillaka, Moratuwa Mayor Saman Lal Fernando and Dan Priyasad, leader of the Nawa Sinhale National Organization, were arrested, they were released on bail.Protesters claim even though MP Johnston Fernando and Mahinda Kahandagama were named as suspects, they were only questioned and no further action taken.

Attorney-at-Law Nuwan Bopege was actively involved at the GotaGoGama protest site providing legal aid for people who sought justice. “Several main individuals, including politicians who aided and abetted the violent incidents on May 9, have not been questioned so far,” he alleged, identifying Senior DIG Western Province Deshabandu Tennakoon as one such individual.

He says there is ample evidence to prove that Tennakoon supported’ the government in “this inhumane act” and it suffices to prove that the incident that took place on May 9, was in fact sponsored by the then regime. “There were many Provincial councillors who also instigated violence, but as far as I know, they were never arrested,” Bopege adds.

Past May 9, law enforcement authorities have been using the Public Property Act to arrest those allegedly responsible for or involved in vandalising public property, primarily buses and houses of politicians. The matter was also raised in Parliament with the MPs demanding compensation for their destroyed property. But showcasing further evidence of the biases, only a handful of Opposition MPs spoke on behalf of the ‘aragalaya’ protesters who were attacked on May 9.

Bopege reveals that over 39 people are still in remand in relation to the violence that spilled over to Nittambuwa, which led to the killing of MP Premakeerthi Athukorala. “In Hambantota, over 20 people were remanded for over five months,” he adds, noting that if government-sponsored mobs didn’t attack the GotaGoGama protest site, it would have continued as a non-violent protest.

Indunil echoes similar sentiments. He has filed a fundamental rights case as a means of seeking justice. “The Police and CID calls us regularly to appear before the two institutions to obtain statements regarding occupying the Presidential Secretariat and other state buildings. But they have kept mum about the cases we have filed. This is rather disappointing because there’s ample evidence to prove that the other party is guilty,” he lamented.

However, lawyers continue to place their trust in the judicial system, with Bopege revealing that a writ application has been filed at the Court of Appeal seeking justice for victims. “A case has been filed against the police seeking compensation in relation to the attack on P. S Anuranga, another peaceful protester who had to undergo a brain surgery following the attacks,” he adds.

Melani Gunathilaka, another peaceful GotaGoGama protester observes that January would mark eight months since the armed mobs violently attacked the peaceful protest site. “The brutal attacks were specifically aimed at women, journalists and activists and permanently injured some people who are still undergoing medical treatments,” she says.

Exhibiting remarkable resilience, the GotaGoGama protest site rose from the ashes of the May 9 onslaught and continued as a gathering point for public discontent for several months. One of the highlights was the massive turnout of the public on July 9, unitedly calling for the resignation of President Gotabaya.

Protesters occupied state buildings including the President’s House, Presidential Secretariat and Temple Trees, and moved on to the Prime Minister’s Office down Flower Road.

The protest site was subsequently dismantled but the arrests continued.

“Even with ample video evidence and testimonies, the criminals are still roaming free,” Gunathilaka alleged, adding “Not only are they free, chances are they might even run for elections claiming to be suitable for making decisions for the citizens.”

Civil society organisations and human rights activists continue to voice their discontent against the double standards maintained by the governments, former and present, when apprehending perpetrators of the attacks. “The failure to hold accountable the persons who inflicted violence on those protesting at GGG on May 9 and caused damaged to the site, isn’t surprising,” says Ambika Satkunanathan, former Commissioner of the Human Rights Commission of Sri Lanka and Human Rights Lawyer.

She said that citizens whose rights are violated have virtually no remedy citing the Tamil families of the disappeared who have been struggling for truth and justice for years. “In a country where there is contempt for the rule of law, justice and accountability are fantasies,” she adds.

Indunil’s legs were paralysed following the attacks and medical reports indicated nerve damage to his spinal cord. He sought Ayurveda treatment. “I’m still receiving treatment. But even though I can walk, I still have to do a surgery on the damaged nerves,” he explained. Indunil had been organising mountain hikes as a profession, but due to the injuries he’s unable to go on hikes anymore. “Since I can walk, I now go on smaller hikes, but as soon as I return from a hike I have to get admitted to hospital for treatments. I earn a buck from this profession and I’m trying to collect money for my surgery,” he adds, hoping his life would return to normalcy, sooner than later.