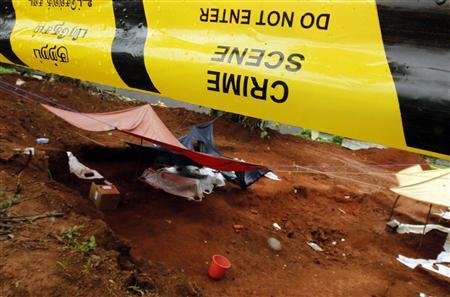 Ranga Jayasuriya
The report of Judicial Medical Officer (JMO), Dr. Ajith Jayasena, on the mass grave in Matale reveals in gory detail the extensive torture the hapless victims had been subjected to before their mass burial.
“The skeletons bore extensive marks of torture. We have discovered a major crime scene,” said Dr. Jayasena.
“Nails have been inserted into the fingers in some skeletons. In some others, nails have been inserted into the legs of the victims as well.

“Some skeletons had their heads severed from the body by a saw. We also found a wire with a loop, which had been used repeatedly. According to our knowledge, its main use could have been to electrocute prisoners,” he explained.

Dr. Jayasena and Professor Raj Somadeva who is an expert of Forensic Archaeology attached to the University of Kelaniya produced two reports on the mass grave, findings of which have revealed the mass grave was dating back to the period 1986-1990.

Their findings have now led to the former inmates of a military-run detention facility located in the vicinity of the mass grave site, in 1989-90, to come forward to claim the detention centre was, in fact, a torture chamber. (See Box)

Soon after the mass grave was unearthed in November last year, theories were afloat about its origin.

The condition of the earth in the crime site had led to some of those assumptions.

“There are termites in the soil in the area, which generally result in corpses decomposing much faster. So the skeletons looked much older than it should be,” the professor added.

The age of the mass grave was determined on the basis of bone colouration and typological analysis of the personal items.

According to Prof Somadeva, among the items found in the grave were two metal rings, a plaster, which was determined as been manufactured by a British company in 1986 and an empty bottle of pharmaceutical product, which the investigators found was dating back to 1989.

Based on his findings, Prof Somadeva determined, “The grave could not be older than 1986 and newer than 1990.” Dr. Jayasena said the main objective of the preliminary report was to establish the time period during which the victims had been buried.

Dr. Jayasena said the determination of the age of the skeletons is important as it would help the relatives of the victims to come forward.

“If it was a grave belonging to the 1848 period no one would have come forward to seek justice. But, this is a recent crime scene. It is important in the search for justice,” said Dr. Jayasena.

“The victims can provide important details on physical attributes of the victims. Two forensic dentists would be coming here from Colombo to assist the identification process,” he added.

After the preliminary identification, samples will be sent for DNA testing.

The gory discovery has its toll on Dr. Jayasena. He said his only wish is that “we would not go through another dark period like 86-90 again,” while others demand justice for the victims who were unceremoniously dumped in the mass grave, after being tortured, in some 25 years back.

On Friday, this newspaper revealed, citing survivors of a military detention centre located in a government school in Matale, in the vicinity of the current mass grave, that a unit of Army’s Gajaba Regiment operated a torture chamber in the school, Vijaya Vidyalaya.

Pubudu Jagoda, Propaganda Secretary of the Frontline Socialist Party (FSP) said the survivors of the torture chamber would come out to reveal the gory details of their ordeal.

“There are survivors of that torture chamber, who survived their ordeal and continue to serve as the active members of our party. They have narrated their ordeal to the party members,” Jagoda said.

Meanwhile, families of the youth who had been detained in the military facility and later disappeared are planning to petition the Human Rights Commission of Sri Lanka demanding justice to the dead.

Jagoda on Thursday filed a complaint with the Commission demanding an investigation.
CT