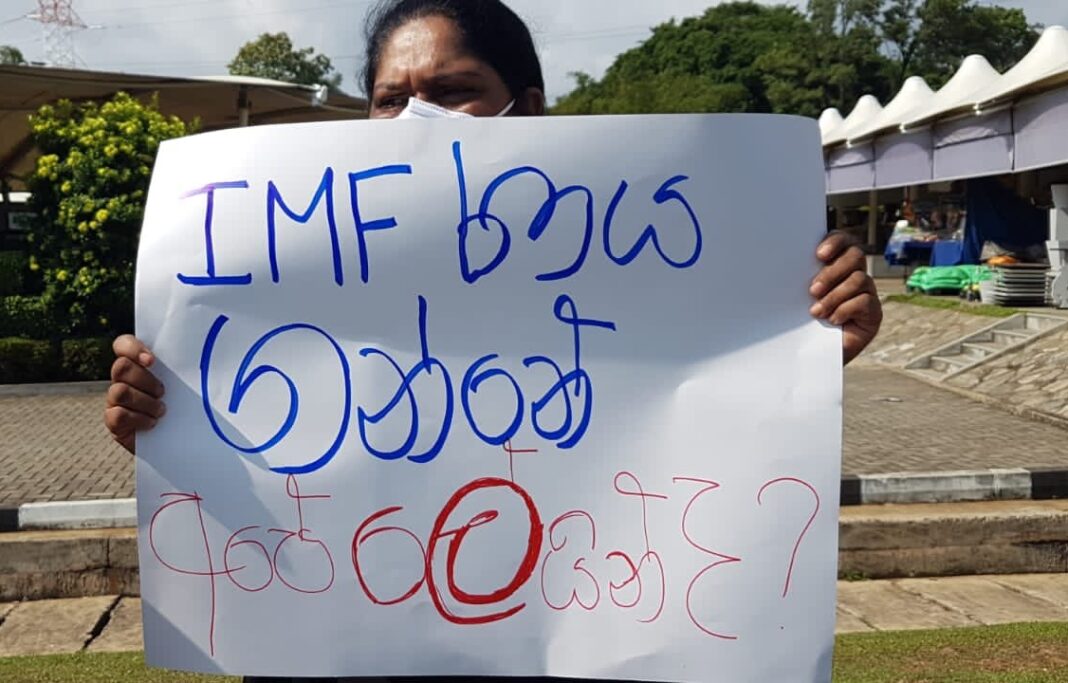 Image: The placard asks “are you taking IMF money over out blood?” as a reaction to state unleased violence against the peaceful protestors.

Statement by the International Network for Sri Lanka’s Democracy (INSD)

The authoritarian Rajapakse regime, which is solely responsible for the acute financial crisis Sri Lanka faces, has been oblivious to the need to ask for assistance from the international community and international financial institutions. Demands that the Sri Lankan Government talk to the International Monetary Fund (IMF) for urgent financial aid were summarily rejected, claiming that all was well with the economy.

After declaring that Sri Lanka would default on repaying an international debt of US$ 51 billion in global debt, the Rajapakse regime has now been forced to turn to the international community for assistance. The IMF has finally been approached.

The regime has been trying to absolve itself from blame for the crisis, even saying that it is the Covid-19 pandemic that was the primary cause of the crisis, ignoring that the regime’s poor fiscal policies have been the major cause. Soon after coming to power in November 2019, taxes on the rich and the corporate sector were drastically reduced, leading to the poor masses having to shoulder the shortfall through indirect taxes. Corruption has increased by leaps and bounds under the Rajapakses and has contributed in no small measure to the mess. The stupid decision to turn to organic farming almost overnight and stop the importation of chemical fertiliser has left the agriculture sector in shambles. Despite the end of the civil war, a disproportionally large military is being maintained. To add to all this, the Rajapakse regime has been very repressive. The international community is no doubt aware of this.

The massive foreign exchange crisis has caused severe shortages of imported goods, particularly fuel, gas and medicine. On some days, power cuts were for as long as twelve hours. There are long queues for fuel and gas. Medical personnel have highlighted the shortage of life-saving drugs. It is the lower-income groups who have been the worst hit.

The regime has not been responsive to the protests that have sprung up spontaneously all over the island. Efforts are being made to sabotage protests. Violence has been unleashed on protestors. 0n 19 April 2022, a Police firing resulted in one death and nearly thirty being seriously injured.

In the above circumstances, the International Network for Sri Lanka’s Democracy (INSD), having a worldwide membership, call upon the IMF to make any assistance to Sri Lanka conditional on the following:

The INSD wishes to emphasise that in taking measures to address the economic crisis, the greatest care must be taken to ensure that the poor and the marginalised are not adversely affected. Instead, direct taxes, including wealth tax, must be imposed on the rich. Monies allocated to health, education and social welfare must not be reduced. Public utility services such as electricity, water and public transport must be available to the poor at affordable prices. Relief must be given to farmers, fishers and others who have suffered due to foolhardy decisions of the regime. It is imperative that all unnecessary military expenditure is immediately curtailed.

We also call upon the international community at large and especially democratic governments, to assist the Sri Lankan people in their grave hour of need while ensuring that democratic governance is provided.