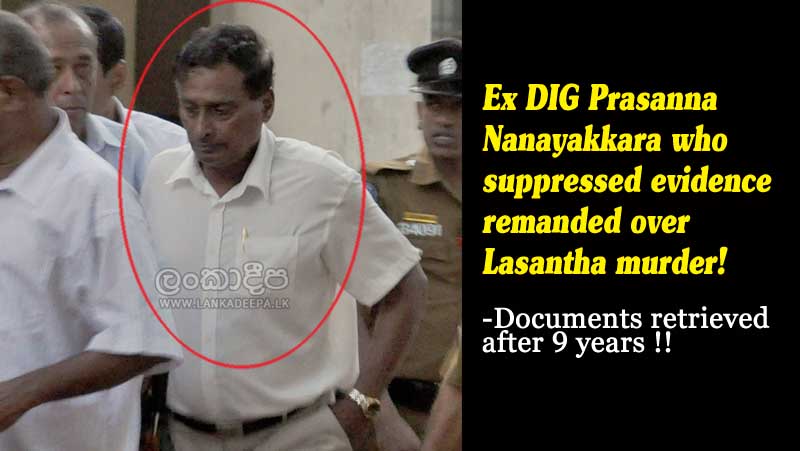 Former Senior DIG Prasanna Nanayakkara who is currently in custody, had been involved in concealing evidence and displacement of the diary of journalist Lasantha Wickramatunge and for the removal of pages of the police report, the CID told court yesterday.

This was revealed when the case relating to Lasantha Wickramatunge’s killing was taken up at the Mount Lavinia Magistrate’s Court yesterday.

The CID also asked the magistrate to issue an order permitting the Police forensics lab to examine the phone details of the Ex- DIG. The judge granted approval for it and issued an order.

The involvement of the Senior DIG in concealing evidence and hampering the investigation on Lasantha’s killing, was established by information revealed to the CID by the former OIC (Crimes) of the Mount Lavinia Police Tissasiri Sugathapala, earlier.

On January 8, 2009, Lasantha Wickramatunge was killed by two assailants who had followed him on a motorcycle at Attidiya. Yet, although investigations were initiated into this crime, the case remained stagnant with no noteworthy progress.

However, the present government recommenced the investigations, since assuming power, and evidence pertaining to this crime have been surfacing gradually.

Information had also been revealed that Lasantha Wickramatunge’s diary which had been found in his car at the time of his assassination, containing all his details, his mobile phone, and, several other items had been given by SI Sugathapala to an SP who had then given it to the DIG and then to the IG, and eventually, to a high ranking government official. This information had also come to light during the interrogation of SI Sugathapala.

The CID told the Daily News that the two motorcycles believed to have been used by Lasantha’s assailants had been found to belong to a person from Ja-Ela, and the other belonged to a person in Nugegoda. However, in 2008, the owner of the bike from Ja-Ela had met with an accident and the motorcycle had been in police custody. The other motorcycle from Nugegoda had also been put up for sale by the owner. It is being investigated as to how these motorcycles had been used for the crime, but investigations being revealed also points to police involvement.

Meanwhile, the CID had also sought a court order to provide special security to the two suspects currently in remand. Previously Jesudasan, the primary suspect in the murder of Lasantha Wickramatunge, died while in remand prison. Similarly, the two youths who were named as Lasantha’s killers, from Vavuniya, were found to have been killed previously and their bodies had been burnt a few days prior to Lasantha’s assassination on January 1, 2009 by an unknown party and their charred bodies were found in the Anuradhapura area. Therefore, the CID had raised concerns about the safety of the two main suspects currently in remand.