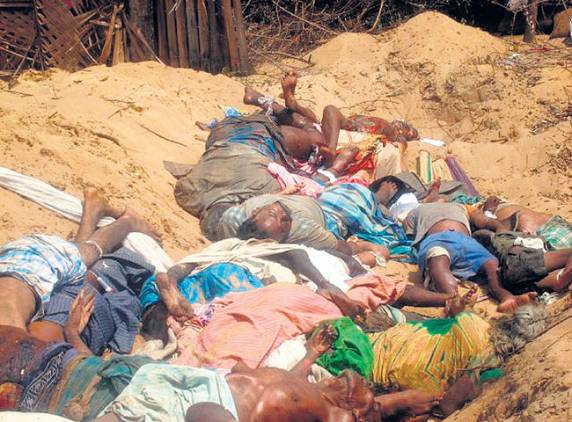 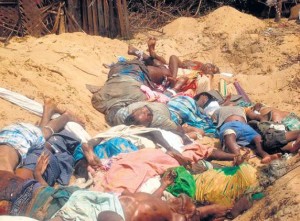 July 9, 2011
The horrific visuals of the British Channel Four video, ‘Killing Fields’, repeatedly telecast by a TV channel to stunned homes across the country have brought fresh pressure upon the Indian Government to act firmly against Colombo for delivering justice to the minority Tamils in the island nation.

The outrage was particularly loud in Chennai where the news channel held a public ‘hearing’ along with the screening, where some well-known persons shared the dais and hotly contested the defence put out by the Sri Lankan spokesman Maj Gen Ubaya Medawale, linked on satellite line from Colombo, that the video was a fake.
“I sat through the Killing Fields video. The gross inhumanity unleashed on the civilians was shocking to say the least. What were the UN and other international agencies doing, apart from watching on helplessly? For some strange.
reason, I wanted the dead souls to know that I know what they went through. This is the least I could do for them”, said Jyoti.
Swaroop, a senior education consultant in Chennai. “Will there be a fall out? Will something be done to get Sri Lanka to pay in some way? I can’t get over the fact that my life went on when close by,
such atrocities were happening”, she said, reflecting what went through thousands of minds watching the TV show on Friday night.
The video is being simultaneously shown in several cities across the world in a new ‘offensive’ by the Tamil Diaspora in a bid to bring pressure on the UN and prominent nations to launch war crimes prosecution against the offenders in the Sri Lankan Government.
“Many newspapers, TV channels and radio stations are commenting on this gruesome video”, said Pirabhakaran of Inba Tamizhan radio in Sydney, Australia. ‘Questions are being asked, loud and clear, what the international community is going to do now”, he said.
“We are grateful to Tamil Nadu chief minister J Jayalalithaa for strongly taking up our cause and demanding that Delhi get more pro-active to help the Tamils in Sri Lanka. She has got resolutions passed in your state legislature that even called for economic embargo by India until the Tamils in the island got equal rights and the war criminals punished. The Tamil Diaspora is looking to her to lead the campaign in India to get us justice”, said Charles Antonidas of the Global Tamil Forum.
The GTF conference on July 5 in London saw top British parliamentarians pledging support.
Having been wary of DMK chief M Karunanidhi’s ways—for instance, his very brief fast during the final phase of the gory Eelam war—the Diaspora now hopes to have a strong Indian ally in Ms Jayalalithaa for exerting.
pressure on New Delhi to join the international campaign for quick rehabilitation of the war-displaced Tamils in Sri Lanka and to launch war crimes prosecution against the Lankan rulers.
“We are hoping to meet the TN chief minister soon to thank her”, Mr Antonidas told Deccan Chronicle.
Deccan Chronicle