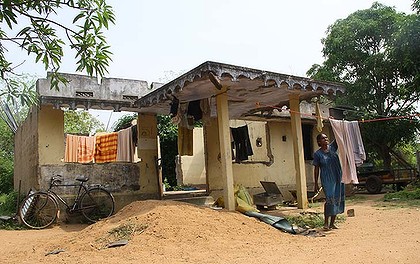 ”Monday’s ABC Four Corners broadcast of Sri Lanka’s Killing Fields was almost unwatchable horror. It showed in gory detail the killing of children, the mutilation of prisoners, the cold-blooded execution of unarmed people, and overwhelming evidence of the rape and killing of women.”
Gordon Weiss/ July 10, 2011
Australians will not tolerate cruelty to animals. Less clearly defined is our tolerance for cruelty towards people, writes Gordon Weiss.

AUSTRALIANS will not tolerate cruelty to animals. Less clear is our tolerance for bestiality towards people. Or so one might think from the stony silence after a British documentary aired on Australian TV last week. The film proved that Sri Lanka’s ”rescue” of hundreds of thousands of Tamil civilians in 2009 was a bloody and cruel affair.

Monday’s ABC Four Corners broadcast of Sri Lanka’s Killing Fields was almost unwatchable horror. It showed in gory detail the killing of children, the mutilation of prisoners, the cold-blooded execution of unarmed people, and overwhelming evidence of the rape and killing of women. When shown on British TV three weeks ago, the same film caused outrage. Questions were raised in Parliament. The Prime Minister, David Cameron, reassured a shocked nation that his government would lead action over the crimes so crudely caught frame by frame on mobile telephones as ”trophies” by triumphant Sri Lankan soldiers. Not so in Australia.

In 2009, Sri Lanka’s army finally trounced the Tamil Tigers, a brutal insurgent group that had fought for independence for three decades. On a small patch of land, the Tigers held more than 300,000 civilians as a buffer against the onslaught. The film now confirms what was long suspected. The army of Sri Lanka secretly killed thousands of unarmed civilians as it manoeuvered for the final kill. Prisoners were slaughtered.
Advertisement: Story continues below

For the record, the Tamil Tigers were unspeakably brutal. They killed thousands of their own, perpetrated terrorist outrages, and used civilians as a bargaining chip. But as one legal expert notes in the film, the barbarism of one side cannot excuse the barbarism of a sovereign government to its own citizens.

When shown in Geneva to ambassadors and UN officials a month ago, the same film provoked tears. The response of Sri Lanka’s diplomats, also in the audience, was blanket denial. The film was a ”fake”, they said, just as they try to convince Australians that Tamils in leaky boats are fake refugees.

Pictures, however, do not lie. Our revulsion at the images from Rwanda, or East Timor, or Cambodia, or Bosnia, was real. Fellow Australians ought to tune in to Channel 4’s film, and get with the picture. Our political leaders must show the kind of moral leadership they were ready to display when driven by public outrage over cattle. Let’s lead on accountability for cruelty and murder, not just meekly follow in the wake of others. We did it in Libya. Why not now in Sri Lanka?

Gordon Weiss was a senior UN official in Sri Lanka, and is the author of The Cage: The Fight for Sri Lanka and the Last Days of the Tamil Tigers
, Pan Macmillan.
SMH