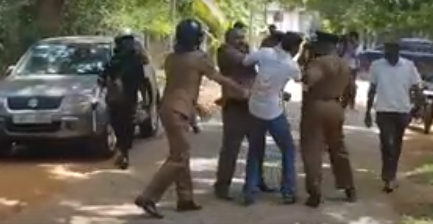 The Human Rights Commission has launched an inquiry into a senior police officer, ASP Roshan Daluwatte  assaulting a journalist taken into custody while he was covering the protest at Hambantota on Friday, reports The Island.

Media spokesperson of the Human Rights Commission of Sri Lanka Saliya Peiris  had said that they had launched an investigation into the assault by an Assistant Superintendent of Police on a detained protester.

Although no one had lodged a complaint with the commission about the incident  the Commission would launch an inquiry into the incident after viewing video clips of the incident.

A video clip ( below see at 18 seconds) went viral in social media and was aired by most TV stations of a senior police officer assaulting the victim in custody on Friday. Podu Jana Madya Peramuna organisation in a statement condemned ASP Roshan Daluwatte assaulting Susantha Bandara Karunaratne a journalist working for the Apple Sunday Sinhala newspaper and demanded that action be taken against the police officer.

The video clip showed Karunaratne being held by two junior policemen, while ASP Daluwatta slapped him.

Editor of the Apple Irida, Sanjaka Prasad Dolewatte, had told the Island: “None of us working for the Apple Irida have media accreditation cards. We started this paper about a year ago. We applied for media accreditation cards, but the Department of Government Information has not complied our request. Yet we continued to publish newspapers as we were told that media cards would be issued soon. Now we have applied again for the next year. There is a serious question as to whether only those who possess media accreditation cards are journalists. Susantha is a journalist and we carry his articles. Even this week we have published one of his articles. He was not only assaulted but also taken into custody and sent to the Matara remand prison.”

Meanwhile the National Police Commission’s claim that it is waiting for a report from IGP Pujith Jayasundara on an incident where an Assistant Superintendent of Police slapped a journalist under police custody during a protest at Hambantota on Friday is ludicrous,  former commissioner of the Sri Lanka Human Rights Commission Dr Prathiba Mahanamahewa has said.

“The NPC is considered an independent commission and, therefore, it should have deployed its own investigators and probed what happened at Hambantota”, Dr Mahanamahewa said, adding that thereafter the NPC should compile its own report and hand it over to the IGP for further action.

With the imputs from The Island