Jean Primrose Nathanielsz: The Sri Lankan Great-Grandmother Who Comes to Protest Every Day 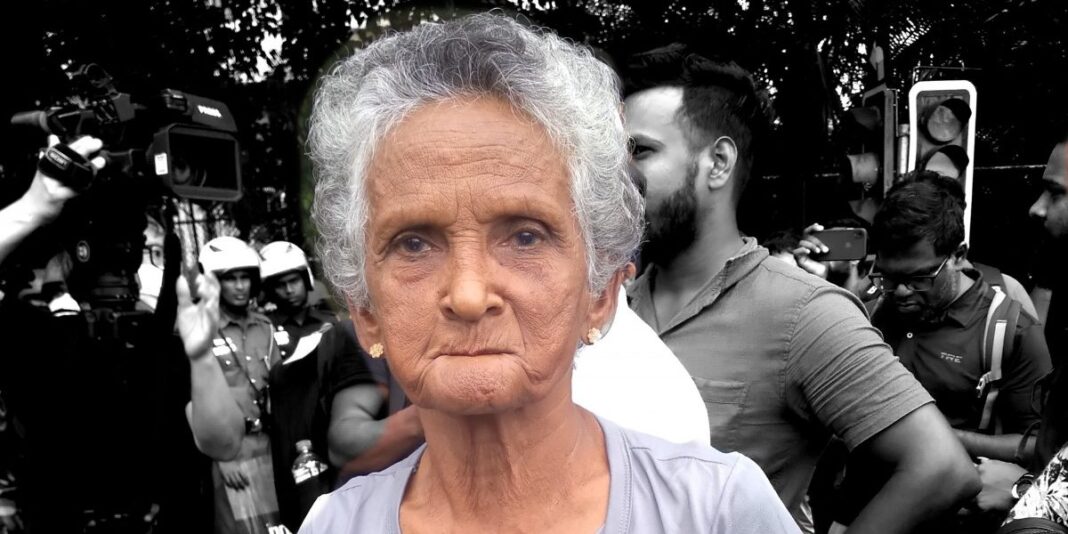 Colombo: Facing up to a sea of blue-uniformed security forces, in their helmets and bullet-proof jackets, a frail, white-haired woman stands undeterred. Jean Primrose Nathanielsz, or “Aunty Jean” as she is fondly known in the movement, is here to protest, as she has been doing every day of the week since April.

Newly elected president Ranil Wickramasinghe unleashed a sudden crackdown on protestors on Galle Face Green in the early hours of Wednesday. The area was barricaded, tents were dismantled and some were people arrested. Nathanielsz was not pleased, and she was loudly expressing her displeasure on Friday morning, as she butted up against the uniformed men. She was trying to make her way into the protestors’ village that had now been cordoned off from one side.

“The protestors didn’t have a stone in their hands,” she said loudly, wagging her finger at the armed men and then the television cameras. “When they are harassing innocent people won’t we get angry?”

Clad in a grey t-shirt that said “Aragalaya” (struggle) on one side, and “our struggle for freedom” on the back, Nathanielsz swore like a sailor, ranting against the unpopular new president. Colourful language was used by this grandmother of 13 and great-grandmother of two. She asked that her age not be mentioned, but she is a senior citizen, a very senior one. “That bastard Ranil,” she exclaimed. “This is the bugger who has taken over.”

Nathanielsz travels daily to the protestors’ makeshift village on Galle Face Green that has grown since the movement began on April 9. She commutes by train from Wattala, a suburb of Colombo, braving the overcrowding, sometimes without a place to sit. “I am fighting for our country,” she said. “If an old woman like me can come, then youngsters must come.”

When police unleashed teargas on the protestors earlier this month, Nathanielsz was there. Twice, she was tear-gassed. Her eyes still hurt, she said. “We are fighting for our human rights,” she continued. “Poor people are struggling, we have to fight.”

On social media in Sri Lanka she is already something of a legend. “Of course I know her,” said Dilshan Aryasena, 26, another protestor. “I admire her and her guts. Even though she is old she is not giving up.”

Samith Bodhipaksa, general secretary of a political group called the All Party Strugglers, affectionately described her as “different kind of a character”. “She is here all the time and protesting with her heart,” he said.

The movement achieved a partial victory by toppling the unpopular Rajapaksa brothers. Gotabaya Rajapaksa fled the country and later resigned from the presidency. After that protestors set their sights on dethroning the new president Ranil Wickramasinghe. Like many others, Nathanielsz thinks he must go. And she still has the fight in her. “Tomorrow also I will come to protest,” she said. “As long as it goes on, I will also keep going.”

This reporting was supported by the International Women’s Media Foundation.