Jaffna Uni. incidents, impeachment of the CJ and Welikada killings are not sporadic mistakes but signs of governance today and a shrinking democratic space 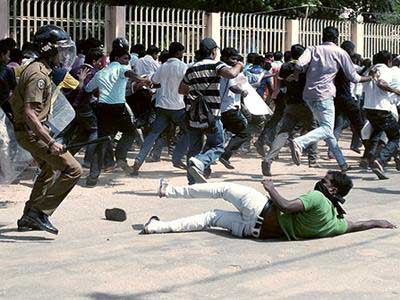 REMEMBERING THE DEAD RITES AND RIGHTS OF THE LIVING .
Bishop Duleep de Chickera
The recent tensions in Jaffna between university students and security personnel, in which a student protest was baton charged, a journalist assaulted and some students arrested and detained, centres around the freedom to remember the dead; whether loved ones, friends or heroes.

It is reported that the students lit lamps to remember the dead. In this act they participated in an universal rite, practised by billions over centuries in homes, cemeteries, places of worship and places where death has occurred. While traditions differ, the essence of the rite is remembrance and the symbolic recognition that the enlightening memory of the dead dispels the darkness faced by those left behind. To respect this rite is a sign of civilisation.

In most societies, specially those which strive to rise from sectarian violence, those commemorated by one group are likely to be considered the enemy by another. Our society is no exception to this. But this does not mean that one has the right to prevent the other from remembering the dead. When the one which prevents is the State, and when it uses resources that are meant to protect its citizens, to suppress them instead, this type of behaviour becomes brazenly discriminatory.

If, there were security concerns that the students had transgressed the law, these should have been investigated professionally with due regard to the same law and the very sensitive distinction between the real and that which is perceived. The seemingly impulsive and forceful reaction to the students’ desire to remember the dead implies a serious lack of ability to make this crucial distinction. This is not all it implies. The use of force appears to have been motivated by a determination to tame an already wounded minority and demonstrates impatience with the right of communities to their respective interpretation of history. But most seriously it revives the memory of the structural and visible violence experienced by the Tamil Community, which lies entrenched within the collective Tamil psyche and which can once again provoke fresh manifestations of violence that nobody wants.

In fact these incidents draw attention to the common sense proposal of the LLRC, appointed by the President, calling for appropriate provision for thousands of Sri Lankans affected by violence to be able to come to terms with their grief with dignity; and to then begin the shift to a healing of memories leading to reconciliation. That such an event has still not happened and that the rights of the people to do so are prevented tells a much more tragic and disturbing story.

This is why the recent Jaffna University incidents, the impeachment of the Chief Justice and some deaths among rioting prisoners in Welikada should not to be seen as sporadic, rash or clumsy mistakes. They are all pointers to an expanding type of governance and a shrinking democratic space. This is also why, regardless of how far north or south we or the other may be, we have to recognise that we are our sisters’ and brothers’ keeper.
DM