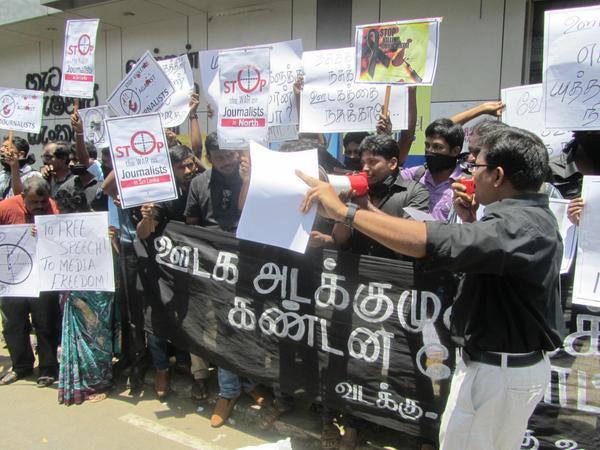 Jaffna 31 July 2014: Nearly 200 journalists andcivil activists joined together in a protest campaign against the attacks, intimidations and harassments faced by journalists in the Northern Province today. The protest was organised by the Jaffna Press Club was held in front of the main bus stand, Jaffna. Activists of   the Free Media Movement had travelled form Colombo to join the protest. Joseph Stalin of the Ceylon Teachers Union also took part in the demonstration. Journalists and civil activists form North and South  Peninsula shouted slogans calling for freedom of the press and democratic rights.. Number of Tamil legislators too had joined the protest. 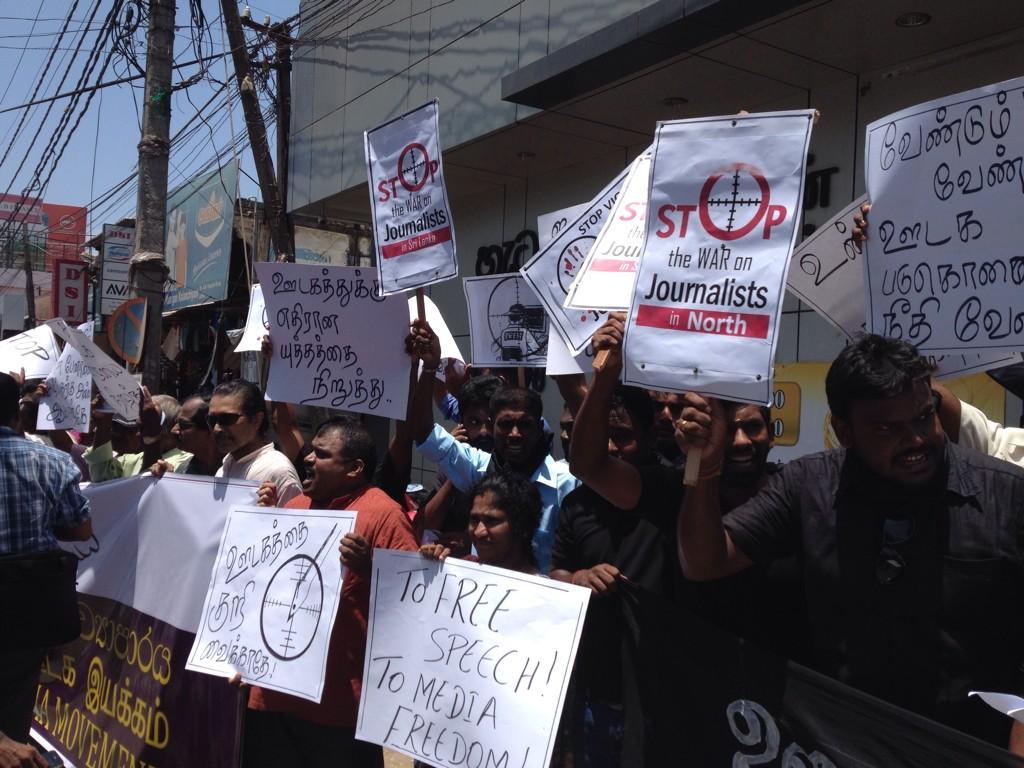 Jaffna Press Club issuing a statement on the occasion emphasized that The Sri Lankan government has not created the environment needed for press freedom. The statement which details the recent acts of suppression aimed at Northern journalists is follows:

Even after the armed conflict in the North has ceased, as the intimidation of journalists has increased, many journalists are fleeing the country having received death threats. Meanwhile, those journalists who continue to work on the ground, continue to have death threats sent to them. In these circumstances, the media community is gripped with fear over the dangers that journalism is going to face in coming days.

The trend of murdering journalists, that started at the end of the year 2000, with the murder of one of our fellow journalist, Mayalvahanam Nimalarajan, continues to till now. Before our very eyes, many of our fellow colleagues have been shot dead. Many have been abducted, many have disappeared. Till now, the Sri Lankan government has responded to these incidents with a long silence.

Whilst the government of Sri Lanka states it has brought a three decade long war to an end, violence against the media has increased in recent times. It raises the questions – has the Sri Lankan government’s war turned against the media? Many journalists, such as Uthayarasa Shalin from Valampuri newspaper, Thileep Amuthan from Uthayan newspaper and Selvatheepan from Thinakkural, have escaped from attempts made against their lives by unidentified persons.

Two Thinakkural journalists, T. Vinojith and P Winslow, were searched for by the Terrorism Investigation Division (TID) who disseminating false propaganda against them stating that they received training by the LTTE. Under these circumstances P Winslow escaped, fleeing the country. Similarly the journalists, S. Nitharshan, V. Kajeepan, S.K. Prasath, S. Karan and S. Tharshan, who went to report from the High Security Zone in Jaffna, had direct death threats made against them by the military. Amidst such threats S.K. Prasath has also fled the country.

In line with this, the military at Omanthai check point tried falsely accuse the journalists, K Hamsanan, V Kajeepan, S. Nitharshan, S. Mayuran, P. Paskaran, S. Soruban, who were travelling to take part in a media training workshop in Colombo on the 25th.

In this way, journalists in the Northern Province are conducting their work everyday amidst severe intimidation, putting their lives at risk. Meanwhile, filing cases seeking compensation in order to cripple media organisations, and summoning editorial board representatives to Palali Army Camp and the 4th floor has become routine. The journalist, Lempard, from Mannar district, is currently facing such investigations. Northern journalists are working with fear, at gunpoint, 24 hours a day. Being threatened and being followed has become normal.

In this environment, the Sri Lankan government is preventing the journalists from even gaining skills related to their careers. A perfect example of this, is the incident at the Omanthai checkpoint on the 25th, as well as two previous incidents when journalists from the Jaffna peninsula travelling to Colombo, were stopped and turned back after Sinhala chauvinist organisations, supported by the state, opposed.

Seven journalists, travelling to such a training workshop, escaped from an attempt to arrest and imprison them, accusing them falsely of possession of marijuana. We note with concern the attempt made to frame at the Omanthai checkpoint, which is clearly under Sri Lankan military control.

This incident illustrates what is to take place in the future. That journalists are being followed and being intimidated reveals the lack of security. As the Sri Lankan government has not created the environment needed for press freedom, we, journalists from the North, have launched a demonstration calling for press freedom, and strongly condemning the plots and ongoing murder attempts and attacks being made against journalists. We thank all parties who supported this protest
JPC