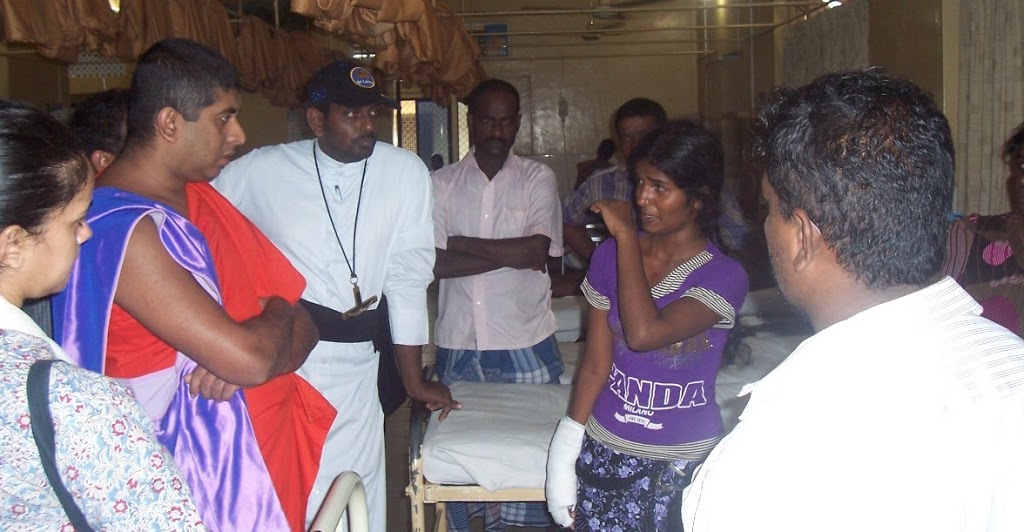 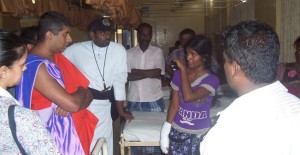 Around 100 young men from Navanthurai, a village in the Jaffna District, were detained in an operation conducted by the Sri Lanka Army around 1.15am on 23rd August 2011. The villagers were severely beaten by the army and dragged to the main road near the Navanthurai Army Detachment located around 300 meters from the village.
The men were loaded onto buses and handed over to the Jaffna police around 4 am and taken to the Jaffna courts by 10 am and produced before the Jaffna District Judge at around 1 pm the same day (23rd August).

Grease Devils in Navanthurai – Confrontation between Military and Villagers
At around 8 pm on 22nd August, villagers spotted five “grease men” in the Navanthurai area. Three men were seen inside the Navanthurai church and two others on trees. When the villagers surrounded and tried to capture the men, they ran into the Navanthurai Army Detachment.

Army operation in Navanthurai
At around 1.15 am on 23rd August, the army entered Navanthurai and detained between 100 – 120 young men from the village[iii]. According to eye witnesses including two Catholic nuns, between 6-12 Army officers entered each house in the village and dragged out men who were sleeping with their families and children. The men were brutally and indiscriminately beaten with rifle butts and iron rods and dragged along the road towards the Army detachment located around 300 meters from the village. Women and children were also beaten in the attack.
When we visited the village that evening, we saw bullet holes in the walls of houses where shots had been fired. Doors and windows had been broken in several houses and villagers said that the army had destroyed furniture and goods inside each house. Many said that valuables including jewelry, phones and money had been taken by the military during the operation[iv].

We saw the bloodied shirt and banyan of a boy who is said to have been beaten inside his home and taken away. We saw blood stains on the road near houses where people were attacked. We also saw a jeep belonging to a villager, the jeep had at least three bullet holes and it appeared that shots had been fired from inside the vehicle. The owner of the jeep who is disabled was also badly beaten.

One villager who is a local businessman said that the army came to his house four times that night and each time they severely beat the men who were inside the house. His 16 year old son was beaten and dragged on to the street by the Army. The men and young boys of school going age were beaten inside their houses and again on the street while being dragged up to the Army Camp. A group of people who had gathered in the village for a funeral vigil, were also beaten, detained or witnessed the attacks.

According to one woman, a man who was carrying a young child was pulled out of his house by the Army. The child he was carrying was flung to aside and the man beaten and dragged away.
The villagers were unable to tell the exact number of officers who entered the village but state that it was well over a 100 officers. There are still conflicting estimates of the exact number of persons detained in the operation. The men were believed to have been held near the Army Camp till around 4 am when they were taken away in buses and handed over to the Jaffna police.

Magistrates Court Jaffna on 23rd August
Around 100 men were produced by the police in the District Court Jaffna. The men were brought to court in their injured state at around 10 am. They were not given access to their relatives until the District Judge intervened and ordered the police to allow one family member to visit the detainees. Several catholic priests, nuns and local civil society activists were also present at the Court. According to those present, the men had visible injuries and showed signs of being severely beaten. The District Judge ordered 18 of those seriously injured to be admitted to hospital and for the medical certificates to be produced in Court. The men were produced before the District Judge Premashankar in batches after lunch at around 1 pm. We were informed that the rest of the detainees were admitted to hospital only at around 7.30 pm based on the order of the District Judge.

The ASP Jaffna Police, in his submission to Court, accused the villagers of unlawful gathering, disturbing the peace, destruction of public property, attacking the police, injuring a policeman and damaging police vehicles

In the evening on 23rd August, the Jaffna District Court Judge ordered all 95 persons who were arrested by police in Navanthurai, to be remanded till August 26. The Judge also ordered all detainees to be admitted to hospital for treatment and for the medical certificates to be produced in Court. 24 lawyers will appear for the detainees on August 26.

Jaffna General Hospital
At around 5 pm, we visited the Jaffna hospital with two Catholic priests and a Buddhist monk from the inter-religious council in Jaffna. In total 20 persons had been admitted to hospital by Court Order.

We met around 7 of the men injured in the attack and their families. Many were still being brought back to the ward from surgery. All the men we spoke to had suffered fractured bones in their arms and legs, some had head injuries and all showed signs of torture or severe beating.

Each person we spoke to had been sleeping inside their homes or in a vehicle when they were pulled out and beaten by the Army. We also met a young woman who was visiting relatives in Jaffna with her husband, who had also been injured in the attack.

Increased Military Presence in Navanthurai Village
According to Jaffna area commander, Major General Hathurusinghe, the military has ‘increased troops and were conducting foot and mobile patrols in the area to assist the police’. When we visited the village at around 5.30 pm, there was an increased military presence around the village. We also saw several women and children with bags leaving their homes. We were told that almost all the men in the village had been taken away by the military or were in hiding and the women were worried about staying at home alone in the night with Army officers still patrolling the village.

The people expressed fear and insecurity due to the heavy military presence and specifically asked for police protection to be given to the village and for Tamil speaking policemen sent to the village. The Buddhist monk spoke to the ASP Jaffna and special police officers were stationed in the village on 23rd night to look after the security of the people.

Statements by Government officials, MPs, Military and the Police
Speaking to a gathering of Muslim Representatives from Ampara, Batticaloa and Puttalam on August 23rd, Defence Secretary, Mr. Gotabhaya Rajapakse said that, ‘the Government will not tolerate those who disturb the peace and law of the country… Severe action will be taken against those who try to take the law into their hands’. Mr. Rajapakse also said that ‘the Government is trying to build a weaponless society and any person who tries to disturb that will be severely dealt with’. ‘Severe action will be taken against people who have attacked the military and army camps and that the Government will not hesitate to treat those who enter the military camp as terrorists’ (translated from Tamil).[vi]

Mr. Rajapakse denied the existence of the grease man and said that these were all constructed in an attempt to discredit the Government. Responding to allegations that the Government was instigating these incidents in order to extend Emergency Regulations he said that this was not their intention and the president has all power to extend or cancel emergency. Extending or withdrawing Emergency will not be influenced by external pressure from India, the US or the UK and not by the Grease man’.

Major General Hathurisinghe, Area Commander for Jaffna said that, this incident was an attempt by politicians and people to disturb the harmony between the military and the people. He said that the military could not tolerate or sit by while people took the law into their hands. There is no such thing as a grease man and these are fabricated stories and no complaints have been made in the police stations. When the police tried to control the situation, people threw bottles and attacked the officers with chains, batons, tube lights and iron bars. People also damaged a police vehicle. As a result the police asked the military to help. Despite this the people attacked the military and we have arrested 100 persons. This is a well planned incident and the people came ready to attack the military and the police[vii].

Major General Hathurusinghe also said that the people will not succeed in removing the military through protests and attacks. This is a matter to be decided by the Defence Ministry and the people have no say in this.
Minister Douglas Devananda said that those caught disturbing the peace will be punished regardless of who they are. He went on to say that village level vigilance committees will be set up to maintain the peace.

Note: The report is based on interviews with 7 men and 1 woman receiving treatment at the Jaffna Hospital and their families; discussions with villagers at the Navanthurai village on 23rd August and Reports in the Uthayan, Thinakural and Valampari newspapers on 24th August.