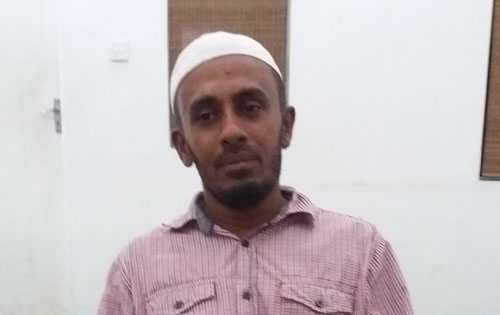 I have written two articles heavily criticising the parties supposedly spearheaded the attacks against Muslims at Kandy recently to Daily FT (http://www.ft.lk/columns/The-world-moves-forward-and-we-move-backwards/4-651588) and another Sinhala publication. I was eager to write about the other side of this issue. In the meantime Ash Sheikh S.H.M. Faleel (Naleemi) has written a book in Sinhala, ‘The Religious Harmony in Sri Lanka – An Islamic Perspective’ and at the book launch I met Ash Sheik Muneer Malaffer (Naleemi). He is a resource person of the National Shoora Council and the Chief Advisor of the Masjid at Thihariya. He is an activist in the field of national and ethnic reconciliation, which is very encouraging since I am also one. I had a brief discussion with him about the issues I have raised here. The interview I conducted with him was published in a Sinhala publication and this is the English translation:

Q: Why wasn’t the point of view of the Muslim community regarding the recent clashes known to society widely?

A: Sri Lankan media, even the so-called national media, do not take sufficient interest in taking the views of the Muslim community to the society at large. Although there were accusations against Muslims such as Halal issue, issue of the false perception of contraceptives and the perception of the increased population of Muslims, the media rarely took adequate steps to question the Muslim leaders and publish their views. In the case of contraceptives, even the medical officers came out openly after the disaster at Ampara. It is depressing to note that we did not have a reasonable opportunity to express our views to the media and make them known to the public at large.

A: As a person who represents the Muslim community and as a person who is with them all the time I can honestly say that there is no such movement to my knowledge which is spearheading the concept of increasing the number of the Muslim community. We have published the possible reasons for the increase of the population of Muslims. The campaign brought forward by the Family Planning Association to promote small families was embraced by the Muslim community to a lesser degree while the other communities embraced it. There is a tendency that the Muslim women marry at a younger age compared to the others of the society. Employment of Muslim women is much less compared to the women of the other communities. These tendencies would have contributed to the growth of the Muslim population. It would be appropriate to do a proper study and reveal the correct facts rather than just accusing.

Q: According to the Muslim Marriage and Divorce Act established in 1950s the minimum age of a Muslim girl for marriage is 12 years whereas according to the common law it is 18 years. Is this coming from the religion or from the Muslim culture?

A: The view of Islam is that when a woman gets married she should have the mental and physical strengths to build a family life. It may be that during the period of Prophet Muhammad girls of younger age got married. If the standard age is higher now, it can be discussed and decided. Already there is a dialogue about this among the intellectuals of the Muslim community. If there are marriages today in the Muslim community where the age of the brides are below 18 years, I think that would not be more than 1% of the total marriages. I am a father. I do not wish to get my daughter married below the age of 18. There are two points in Islam, beliefs and regulations. Minimum age for marriage is part of these regulations which can be discussed and changed from time to time.

Q: Basic background of this is religion, isn’t it?

A: Yes, but there is a problem of understanding of the religion. Most of us inherited the religion from birth. Therefore all do not have a clear understanding of the aim of Islam. If we take Buddhist society, material offerings have overcome the offerings by practice. This is applicable to the Muslim community as well. We look at the surface. We should go beyond the surface and examine why it was said.

Q: Many Muslim women wear burka today covering their whole body except eyes. About 50 years back Muslim women wore sarees and covered their heads from the same. What is your view about this? What is the relationship of this to the religion?

A: There is an opinion that present habits of Muslim society were non-existent 40 years back. Prior to the introduction of free economy in 1977, the Muslim community was influenced by South Indian traditions. Our mothers wore sarees. Young women wore salwars. Many young women went to Middle East for jobs after 1977. They may have thought that dress worn by the women in those countries, especially in Saudi Arabia where the Prophet Muhammad was born, should be the most appropriate dress. They brought that dress when they came back, and it was spread among their friends and relatives. Businessmen thought to get a business opportunity by popularising this dress.

There is another side of this. Not only the Muslim community but also the Buddhist community and the other communities changed during the last 40 years. Women in those communities prefer to wear dresses which uncover parts of their bodies. Which type of dress is more suited to the traditions of Sri Lanka, dress which covers the body or uncovers the body? I ask this question from the persons who try to make this an ethnic issue.

I personally do not like the burka. My wife does not wear this. We should be concerned if a certain dress is a hindrance to certain check-ups related to security. There are regulations in our religion regarding dress. A man should cover from navel to knee. A woman should cover whole body other than face and hands below wrist. They can decide which dress they should use to do that. Women in Malaysia and Indonesia use dresses of their countries.

Q: It is believed that Muslims were settled in Kandy by the Sinhala Buddhist kings supported by Sinhala Buddhists to protect them from Western invaders. First clashes between Sinhalese and Muslims occurred in 1915. There were several clashes in recent times. How can we address this issue?

A: The reason why other countries around us moved forward and we moved backwards was that the different ethnic groups and people with different religious beliefs did not understand one another. They did not learn to respect others. They did not understand the culture of others. We used to suppress others on these grounds. When we were independent we were second only to Japan. Also we are in a higher position in education and health. Nations which were behind us surpassed us. When I went to Malaysia I saw that there was one Malaysian nation although there were different ethnicities. In our country politicians of all ethnicities and religions use ethnicity and religion to establish their power. It is a blessing for a country to have people with different ethnicities and different religions. We can go forward if we can build one Sri Lankan nation. The responsibility of gathering people of all ethnicities and all religions and marching forward lies with the majority Sinhala Buddhists of this country.