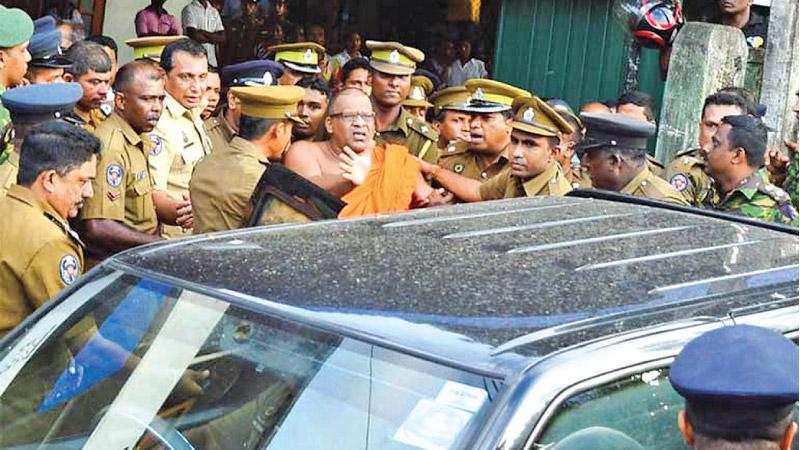 From a series of cases filed in relation to the abduction of Prageeth Ekneligoda, one saw its conclusion on May 24, having found Ven. Galabodaaththe Gnanasara Thera guilty on two charges. Though this is an unplanned, additional case that sprung up based on the actions of the controversial monk, the missing journalist’s wife Sandhya, turned disappearances activist feels a sense of relief that the case is over and justice prevailed.

“This monk has hurt so many people, I am glad that at least through this court case, there has been justice for his crimes,” the journalist’s wife said outside the courtroom on Thursday after the guilty verdict was read. Head bowed inside the courtroom the Bodu Bala Sena General Secretary

who is facing several other criminal charges, listened silently while Homagama Magistrate Udesh Ranatunge pronounced him guilty of criminally intimidating Sandhya Ekneligoda inside the same courtroom two years ago.

The monk was found guilty under Sections 346 and 486 of the Penal Code which carries a maximum penalty of two years rigorous imprisonment or a court imposed fine, depending on the gravity of the offence, sources from the Attorney General’s Department told the Sunday Observer. Ahead of the monk’s sentencing, the court has called for his fingerprint record, as per the procedure in all criminal cases before sentence is passed, to determine if the accused has any previous convictions. The court can also order compensation to the victim of the crime – in this case Sandhya Ekneligoda – up to Rs 100,000, but legal experts say, she could be entitled up to Rs 1 million in compensation depending on the seriousness of the crime, based on the provision in the recently enacted Witness Protection Act.

In an interesting twist, one of the witnesses in the case against the Bodu Bala Sena General Secretary was former Homagama Magistrate Ranga Dissanayake, in whose courtroom the intimidation occurred in January 2016. Deputy Solicitor General Dileepa Peeris and Gnanasara Thera also gave evidence in the case, while Sandhya’s own attorney Upul Kumarapperuma was cross-examined by Counsel for the monk, Manohara De Silva PC. Since the matter was a criminal case, Senior State Counsel Janaka Bandara appeared on behalf of Sandhya Ekneligoda.

Now renowned for her courage and determination to speak truth, Sandhya’s case against the controversial monk was initially referred to the Mediation Board. But the wife of the missing journalist was determined to take the monk to court, and refused the mediation process.

“People should not be allowed to impose authority on others and oppress them,” she says, after emerging victorious last week. “I wanted a verdict – I wanted closure. I felt it was my duty to proceed with this case rather than going for mediation because this person has wronged so many people in this country,” she says, ever the activist.

Sandhya gave evidence in the case as the first complainant, while the Director of the CID and the HQI of Homagama were also called as witnesses for the prosecution. Gnanasara Thera made a lengthy statement without stepping into the witness box.

In his statement, the BBS monk explained his history as a teacher and then how he had supported the military by giving them moral support, and how he had been disturbed when the court was making decisions against accused military officials in the Prageeth Ekneligoda disappearance case.

Journalist and cartoonist Prageeth Ekneligoda who worked for the website LankaeNews, disappeared without a trace on January 24 2010. Investigations into his disappearance encountered some hiccups, as well as massive obstacles, and at the moment, have come to a standstill. It was the belief of Ekneligoda’s lawyers and family that he was abducted due to his work in the campaign for the then opposition presidential candidate General Sarath Fonseka. It was also reported that Prageeth was working on a booklet entitled Pavul Gaha (Family Tree) when he was abducted. The USB drive which carried the draft of the booklet along with other cartoons he had drawn was never found.

When authorities failed to give her answers about her husband’s disappearance, Sandhya filed a Habeas Corpus writ in the Court of Appeal in March 2010, three months after Prageeth went missing, to determine his whereabouts. The court of appeal directed the Homagama Magistrate to launch a magisterial inquiry into the scribe’s disappearance.

After the defeat of the Rajapaksa administration in 2015, the Ekneligoda investigation gathered steam, with police sleuths linking his disappearance to an army camp in Giritale, in the Polonnaruwa District. Several retired MI officers were arrested by the police in connection with this case in August and September 2015.

During the course of this investigation, on January 25, 2016, the controversial Bodu Bala Sena General Secretary stormed into the Homagama Magistrate’s Court while proceedings were underway, demanding to be allowed to intervene in the inquiry. He wanted to state his case, the BBS General Secretary said. The Magistrate, taken aback by the outburst, declined the request, since he said the monk was not a party to the disappearance case. Gnanasara Thera then lashed out at Government lawyers, court officials and police officials investigating the Ekneligoda case. He called them napunsakayas (eunuchs), traitors and reminded the officers of the court including lawyers from the AG’s Department and the court stenographers that Sri Lanka had been at war. Prageeth, the missing journalist, Gnanasara Thera claimed, had been an LTTE spy. Then, almost at the door to the courtroom, the venerable monk leaned close to Sandhya Ekneligoda’s ear to whisper foul-mouthed threats, before flinging his robes about and storming out of the courtroom.

The case of criminal intimidation was initially filed under the Witness and Victims Protection Act, but in 2016 the charges were changed. AG’s Department sources said that there were technical irregularities with the Act as it was soon after the Witness/Victims Protection Act had been enacted, and Sandhya’s case would be the first to be charged under the new law. However it was decided to proceed with the case under different charges under the Penal Code rather than delaying the case until the new law was rectified.

Subsequently, amid suspicions of political interference and blockading by the military, all 11 military suspects arrested in connection with Prageeth’s disappearance case were released on bail on a staggered basis in 2016. There has been relatively little movement on the case since. As for the fiery General Secretary of the ultra-nationalist BBS movement, he faces separate contempt of court charges and several other cases relating to incitement of hatred and organized crime and is currently on bail on each of these charges.

But at least last week, with the guilty verdict for his threats against Sandhya Ekneligoda, Gnansara Thera, the extremist monk who has been at the forefront of hate campaigns against minorities in the country for six years now, finally had a day of reckoning.