Is the Govt. making Rajapaksa’s New Year resolution a reality? 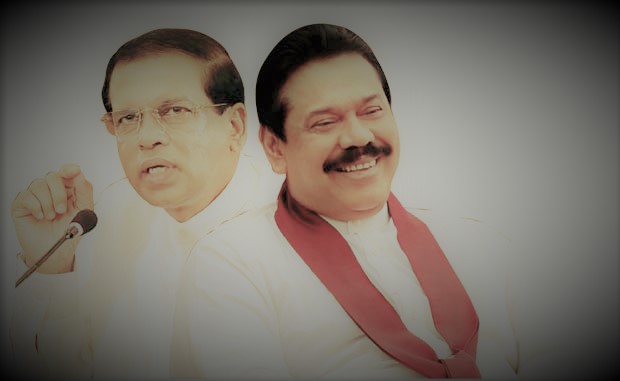 Ex-President Mahinda Rajapaksa announced his New Year resolution a little too prematurely, days before 2017 dawned when he pledged to bring down the government. Last week, his self-anointed cronies put up a good show in Hambantota, though he himself kept way from the scene so that he would not offend the Chinese. Protests at the launching of the Hambantota export zone, where villagers clashed with police highlighted yet again one of the often talked about handicaps in economic development in this country — people themselves. It is tempting to dismiss protesters as buffoons, because they also have a vote to cast when it comes to elections and the right to protest and not getting shot at. That is the beauty of democracy. That is exactly why Mr Rajapaksa’s former regime was wrong when the army turned its guns on protesters in Rathupaswala. It is also the beauty of democracy that protesters are lionized, no matter the logic of the protest whether it is Rathupaswala or Hambantota. This a catch-22 situation for any democratic government that wants to govern a country democratically while also delivering some form of economic development. That is because economic development in most cases causes physical and emotional displacement and would necessarily be fought back by some segments of society. Perhaps the government can learn from the strategies of its predecessor, which albeit had its faults, but should be applauded for efficiency with which the projects were implemented (though some of them ended up being vanity projects). However, deploying the Special Task Force to evict squatters, as Mr. Rajapaksa did, does not look good on television, yet the government should be able to evolve a subtle yet effective way.

“Mr. Rajapaksa would be the beneficiary of all that mismanagement”

Where grievances and disagreements persist, they ought to be looked into in a utilitarian way — the greater good for the greatest number of people though it would come at the expense of a few.
However, the problem of protests, especially when they involve emotive often exaggerated claims such as turning Hambantota into a ‘Chinese colony’ could have far reaching political consequences. After all the uneasy cohabitation between the UNP and UPFA has been made possible because of an absence of any other tempting alternative for the SLFP parliamentarians who have therefore submitted themselves grudgingly to play the lowly second fiddle in a government dominated by the UNP. As the public statements of discontent of the SLFP MPs made it clear the UNP is not treating their Blue peers well. State minister Priyankara Jayaratne, has resigned and many others are reportedly fuming at the step-motherly treatment they are receiving. When a political opening appears, the aggrieved MPs would abandon the government, like the rats jumping off a sinking ship.That would mean the end of the government itself. 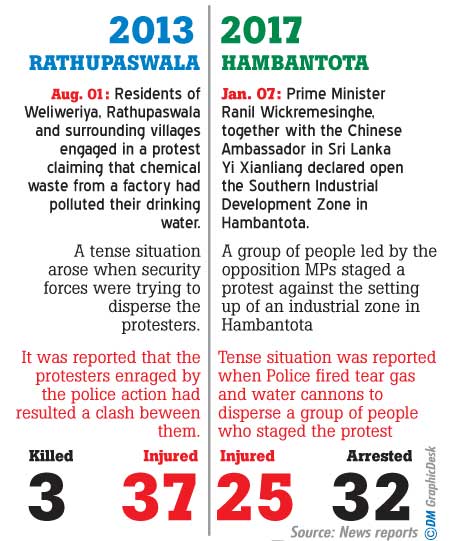 It is in the interest of the UNP to be magnanimous towards its SLFP partners in the government. After all, the UNP’s current feat could not have been possible without a SLFP president, though he ran the presidential race against his own party. President Sirisena’s victory in the presidential election itself was a result of sound calculations of electoral mathematics rather than an outright popular mandate. (He lost the Sinhala majority vote). Then, the UNP could not win the simple majority even after the president by virtue of some of his statements, effectively campaigned against his own party during the general election. Thus this is a government that was formed through compromise and intelligent calculations of electoral mathematics. It can only be sustained through compromise and intelligent behaviour.

The UNP itself has its other persistent problems — the limited public credibility which is mainly due to the former regimes’ demonizing of the party in the past as being in cahoots with manifold evil forces, hell-bent on undermining the country.

A group of UNP parliamentarians who met President Maithripala Sirisena last week has urged him to rein in SLFP parliamentarians who undermine the government or let the UNP to form a government of its own (to which the president has asked whether the UNP itself has numbers to do so). Numbers apart, an exclusively UNP government would find it hard to function effectively and become a hostage of the image it was painted in by its opponents in the past. Any meaningful effort, be it a new constitution or economic development, is more likely to be confronted with greater venom and more people would think the protesters, no matter how selfish their real motives are, have a reasonable case. It will take at least one full term and some tangible economic and democratic gains for the UNP to effect a change in the public perception. Instead of trying to take control of the government prematurely could end its luck.
“It is in the interest of the government, including its SLFP members not to create an opening for Mr Rajapaksa to exploit”
Mr. Rajapaksa would be the beneficiary of all that mismanagement. He is by far the most accomplished political mobilizer among living politicians, though his success was not so much because of his virtuousness, but his dubiousness; his ability to play multiple roles to different audiences and making sure his family and cronies are happy and well taken care of. As much as Mr. Rajapaksa’s regime helped end a brutal war and bring peace, for which he is still credited, any future involvement by him in politics would be disastrous for the country. Sri Lanka has left behind that sordid past where extra judicial violence and heavy handedness were mandated to end a greater evil. His return would only revive the past evil.

It is in the interest of the government, including its SLFP members not to create an opening for Mr Rajapaksa to exploit. The SLFP Ministers in the unity government themselves would find themselves at a relative disadvantage in case of Rajapaksa ascendancy since Mr Rajapaksa will have to look after those 50 odd members who remained loyal to him during his bad times before he doles out leftovers to others. Thus all the plum ministries will likely go to those 50 time-tested acolytes while others will get bread crumbs, which would do little justice to the SLFP members who jump the ship due to the differences over the distribution of perks and privileges within the government.

There is another way that the government can play into Mr Rajapaksa’s hand, that is by over appeasement of the West. The latest is a proposal by the Consultative Task Force to appoint at least one foreign judge for each bench to hear cases on alleged war crimes. Another risky business is, no matter how noble its intentions are, the on-going deliberations to draft a new constitution. Finding a much needed political solution to address Tamil grievances has proved to be a highly emotive and disruptive affair in the past. Odds are high when there is little effort to inform and sell the solution to the public with an equal vigour that Mr Rajapaksa sold patriotism to the masses. The current economic circumstances are also not conducive for rushing a constitution as people who are increasingly getting frustrated over bread and butter affairs will vent their frustration through other means.

Mr Rajapaksa cannot solve any of these problems, but he can exploit them to grab power. He could even govern by exploiting those differences, rather than solving them.
– Courtesy Daily Mirror