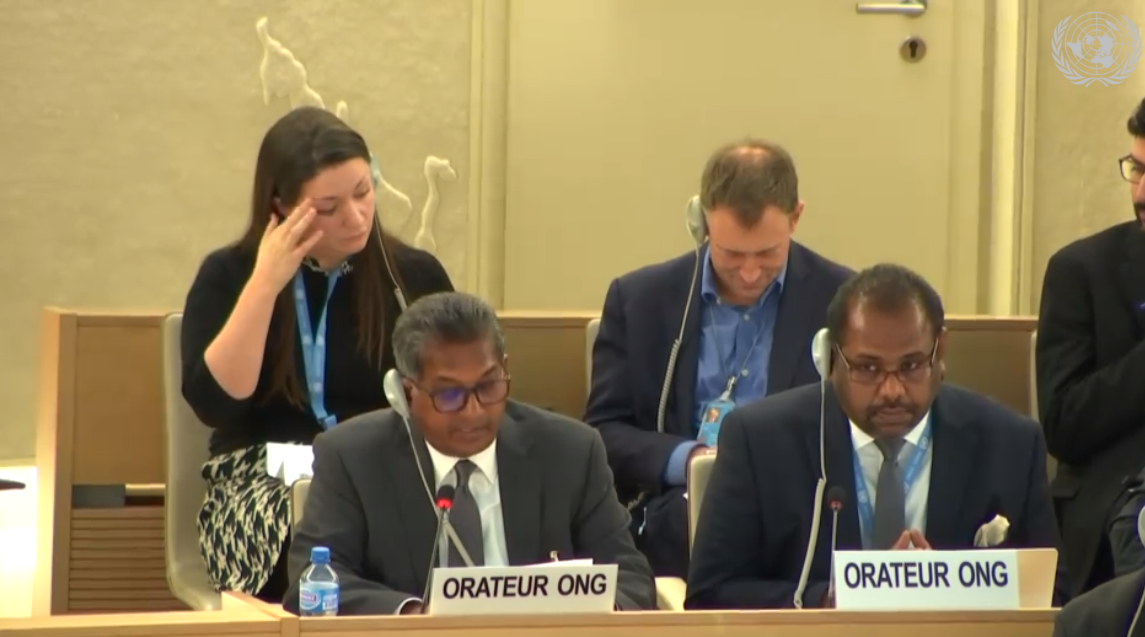 Image: Sri Lanka Attorney at Law Ameer Faaiz ( on right) made the intervention behalf of IMADR and FI.

I was here, with you, a year ago, sharing my dismay at the terrible events that were taking place in Sri Lanka, my country, in March 2018.

You will recall, violent mobs led by extremist Buddhist monks attacked Mosques, homes and businesses of the Muslim community in Digana town and surrounding areas in the Central Province. Two people lost their lives, one man burnt to death inside his own home. Several persons injured, around 450 shops and houses were destroyed, together with 24 places of worship, many burnt to the ground. All this happened while the police stood by and watched, and our national political leaders failed to respond immediately to put an end to this violence.

This body expressed its serious concern at events, which has been reiterated in the High Commissioner’s report to this session.

A year on, no one has been held to account for this violence, even though perpetrators have been identified and evidence available. Leaders of an extreme Sinhala-Buddhist violent group were arrested but later released on bail and many have returned to the places where the violence occurred.

The apparent lack of political will to promote reconciliation is manifested by non- adherence to even the “easy to-do” list, including the full release of privately-owned lands and townships that were owned by both Tamils and Muslims and non-prosecution of perpetrators of violence. The mix messaging by political leaders continue to threaten civil society initiatives for peace and reconciliation including any confidence building measure.

There is still widespread fear and anger in the North and East. There is still culture of impunity often justified and backed by some political leaders. Minority communities fear that violence can re-occur any time if it becomes politically useful again.

What I recalled is just one recent incident. Another anniversary, another death, which highlights the simple reality that failure to establish accountability for institutionalised and politically motivated violence against Sri Lanka’s minorities allows it to take place, again and again.

This year a decade has been passed since the end of the war which was marked by the most brutal violence imaginable. Allegations of grave crimes including war crimes and crimes against humanity have not yet been investigated into. There is much to be done as stated in the High Commissioners report.

Sri Lanka’s history over the past fifty years has seen repeated cycles of state violence, political insurrection and militant uprising, all marked by human rights violations, assassinations, torture, enforced disappearance and the killing of so many innocent people.

In 2015, we had hoped that with your support, we might begin to find a way to change, to heal, to reconcile, to bring the violence to an end and to address its terrible legacy through the measures and commitments made here, in HRC Resolution 30/1.

Four years on and still, as noted in successive reports by the High Commissioner, progress by our Government towards the implementation of the transitional justice mechanisms agreed in that resolution has been lamentably slow. Good faith and hope in the country have turned to disappointment and frustration. And human rights violations continue to take place, including torture and sexual and gender-based violence.

We in civil society recognise that there has been some positive progress. The total number of violations has decreased. The establishment of the Office on Missing Persons (OMP) is to be commended. But the climate of fear and impunity continue – and until the OMP is able to deliver concrete results for family members searching for their lost ones it will be unable to gain the trust of victims and those working to support them. The OMP commissioners are working hard to deliver on their mandate, including bringing out an interim report within 6 months with recommendations that covered broadly provision of social relief, legal reforms, non-recurrence and memorialisation. The sudden political crisis brought about by the President of 51 days impacted on the implementation. We appreciate the interim relief of Rs. 6,000.00 per family in which persons are missing, proposed to be paid in the budget.

The OMP remains the only transitional justice mechanism that is up and running. It is important that other mechanisms be established immediately to holistically address the challenges related to reconciliation, truth seeking and non-recurrence. We are still waiting for the operationalisation of the Office of Reparations. The proposed truth and reconciliation commission Bill has not yet been presented to Parliament. We also wish to commend the role played by the Constitutional Council striving to assist in the much-required state reform process.

Of most concern, our national political leaders pander to populist politics, repeatedly denying the need for accountability for war crimes and rejecting the establishment of a special court with international judges despite making that commitment back in 2015.

While we wait in vain for a special court, the existing criminal justice system has demonstrated little willingness to address emblematic cases of past human rights violations. Apparent political interference in investigative processes has undermined the delivery of justice in many of these cases and highlights the challenge to achieving accountability through exclusively domestic mechanisms.

Last year’s attempted constitutional coup has shown us all just how fragile our democratic structures are. The coup presented serious challenges to the protection and promotion of human rights. We saw clearly that the institutions of state that have enabled mass levels of human rights violations over many years have not yet been dismantled and may easily be activated again if there are changes in the political context.

Many of the individuals accused of the most grievous violations, including crimes against humanity, continue to hold positions of power and authority or have recently been promoted to those positions. Civil society sees this as yet another example of the lack of real commitment of our Government to transitional justice and a snub to the HRC and to all the Member States gathered here.

In this profoundly challenging context, we call upon this Council to:

• Renew the mandate of Office of the High Commissioner for Human Rights (OHCHR) to monitor and support the implementation of the commitments made by the Government of Sri Lanka in Resolution 30/1 – and to provide a progress report to the Human Rights Council every six months;

• Request the Government of Sri Lanka to prepare and present a comprehensive action-plan with clear time-lines for the implementation of the commitments made in Resolution 30/1 and the recommendations in the report of the Consultation Task Force on Reconciliation Mechanisms (CTF). The plan will provide linkages between the mechanisms to be established and the provision of justice and accountability;

• Urge the Government of Sri Lanka to invite the OHCHR to establish a country office to monitor human rights, to support the implementation of Resolution 30/1, CTF recommendations and those made by the High Commissioner, the Human Rights Council and its Special Procedures and other human rights mechanisms. The OHCHR office will provide technical assistance, including for the gathering and protection of evidence;

• Call upon all Member States to provide full cooperation and assistance to Sri Lankan civil society in support of our efforts to ensure the protection of human rights and the promotion of transitional justice in our own country. And to engage responsibly with the Sri Lankan state through an appropriate range of diplomatic measures in the case of continued slow delivery of its commitments in Resolution 30/1;

• Call upon Member States to investigate and prosecute those accused of war crimes and other international crimes, as recommended by the High Commissioner.