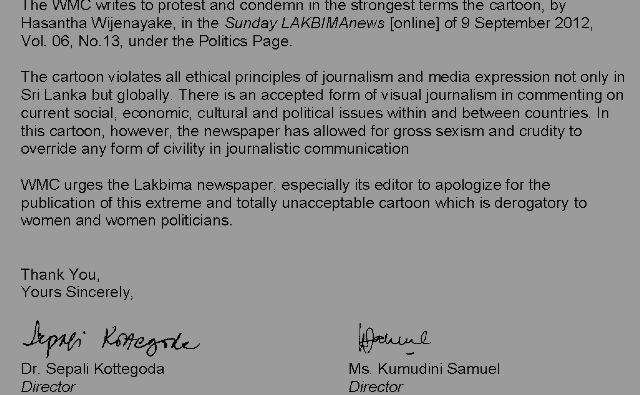 A cartoon that appeared in Lakbima newspaper of Sri Lanka, on Indian Prime Minister Manmohan Singh and Tamil Nadu Chief Minister Jayalalithaa, has awakened the masses in India on the sexist side of the genocidal culture encountered by Eezham Tamils over several decades, said South Asia watchers in New Delhi noting responses from different parts of India. The impact of the cartoon in India in realising the nature of the genocidal culture that is not checked, not boycotted like the apartheid, but is always pampered, is many times more than the impact evoked by seeing images of the sexual abuse of even corpses of Eezham Tamils, the South Asia watchers said. The cartoon found condemnation in Colombo too, by Women and Media Collective (WMC).
The WMC on Monday urged the Lakbima newspaper and its editor to apologize for the cartoon, as it is derogatory to women and women politicians.

But the acting editor of Lakbima, Ranga Jayasuriya, said on Monday that he would stand by the cartoon.

“The cartoon by my colleague Hasantha Wijenayake should be treated as a matter of artistic expression,” Ranga Jayasuriya said, adding that “vulgarity, like beauty lies in the eyes of the beholder.”

Last month, three French tourists to Sri Lanka were fined and were sentenced to 6 months suspended prison term, for a woman tourist among them kissing a Buddha statue in Kandy and taking a photograph of it.

When the tourists were printing their holiday pictures at Galle, the studio employee alerted the police, who in turn arrested the tourists, The Asian Age reported on 22 August.

But the scale used for ‘culture’ was different when a number of Hindu temples were desecrated, vandalised and destroyed. It was different when the Tamil women were raped, killed and even the dead bodies were displayed with vulgarity.

Sexual assault by the occupying Sinhala military as a way of terrorisation and genocide-intended sexual abuse, making Tamil women pregnant by the occupying soldiers, now come to light in media reports. But the culture of getting pleasure in seeing Tamils naked has a long legacy in the island.

Those who had portrayed the LTTE as the worst ‘terrorists’ in the world and pampered the genocidal SL military never appreciated the absence of sexual violence on the part of the LTTE. Once again the scale used was different and the eyes were jaundiced.

On the issue of Tamil Nadu Chief Minister sending back Colombo footballers, and a group of political activists harassing Sri Lankan tourists, a group of some prominent writers and social activists in Tamil Nadu have also now come forward to condemn the CM for harming ‘people to people’ relationship, following the stand of the CPI-M and The Hindu. Many of the members of the group are of Marxist-Leninist or other Leftist political background.

A State, as a policy, stopping political sports is different from activists harassing tourists. The latter is of bad taste.

But those who jump at upholding ‘people to people’ relationship in the given context of Sri Lanka provide only more confidence to that State and institutions like Lakbima in their display of genocidal culture.

The signatories of the statement have forgotten that India in its campaign against apartheid had banned all people to people relationship between India and South Africa for a very long time. The people of Indian origin in South Africa were the worst affected, losing all linguistic, religious and cultural contacts with their motherland. Yet, the boycott was needed to establish a universal point of international polity and human civilisation.

Why the scale is different on Sri Lanka, even in the eyes of the group of Marxists? Is it because ‘people to people’ relationship had to be banned in one instance but promoted in another instance for the imperial interests of the State they aspire for India? Or, perhaps, as Lakbima’s Ranga Jayasuriya was defending the cartoon, genocide, like beauty lies in the eyes of the beholder.
TN

Why I stand by our cartoon 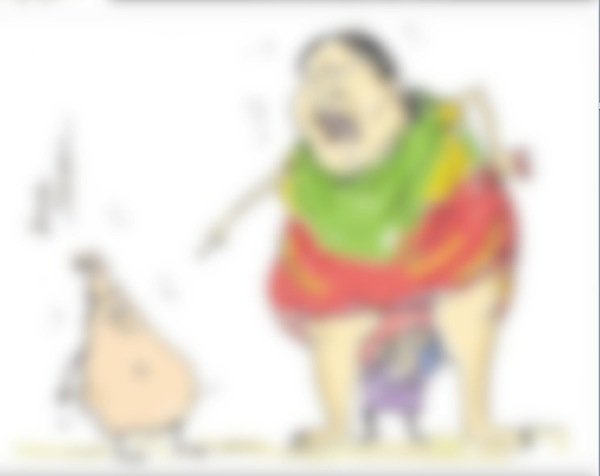 The LAKBIMAnEWS cartoon on Sunday seemed to have ruffled some feathers. Going by the tweets that were critical of the cartoon, I noticed some card-carrying activists of the anti- Sri Lankan lobby, who may have mistaken LAKBIMAnEWS for one of the Sri Lankan government mouthpieces – which LAKBIMAnEWS is not – and decided to make avail of this opportunity to go for another round of Sri Lanka bashing. That is a sad miscalculation on their part, and they would have known better, if they had happened to go through the editorial content of LAKBIMAnEWS.

To begin with, the cartoon by my colleague Hasantha Wijenayake should be treated as a matter of artistic expression. Cartoons can, sometimes, be provocative, irritating and even outrageous in the way they lampoon the powers that be. Our cartoon depicts the Indian political dynamics vis-à-vis Sri Lanka, as viewed by our cartoonist. A cartoon could hardly cover the full range of the story. Our cartoon, in my opinion, did not cover the full scope of the Indian foreign approach towards Sri Lanka as per the Tamil question. But it covered a part of it, i.e. Tamil Nadu’s increasing belligerence towards Sri Lanka and a prime minister who appeared to be lost in this power dynamic.

Is our cartoon vulgar? I would say, vulgarity, like beauty lies in the eyes of the beholder. While puritans would now be calling for our blood, for the subtle sexual connotation in the cartoon, my position was that it should not be a reason for censorship. Art should not be viewed through puritanical lenses and I do not believe that I, as the acting editor of LAKBIMAnEWS, a post I agreed to hold only until the management finds a replacement, should replicate the censor board of Sri Lanka’s film cooperation. It is a well thought out decision on my part to publish the cartoon and I stand by it.

Going by some of the initial reactions to the cartoon, I suspect that some egos might have been challenged, but our Indian colleagues should understand that Sri Lankans are also entitled to express themselves, even though sometimes such expressions could be mildly irritating, as our cartoon happened to be. A good dose of tolerance is a prerequisite for any healthy society and I have always believed that India with its flourishing free press, institutional democracy and newfound self confidence can be a beacon of hope for us in this part of world, which has recently witnessed a fresh wave of intolerance and extremism.

LAKBIMAnEWS has never been an Indian basher. Our editorial on Sunday stated that any attempt to reproach New Delhi for the rising pro-Eelam activism in South India was both flawed and counter-productive. We went further to suggest that Sri Lanka seemed to have learnt from its previous mistakes vis-à-vis the handling of its much larger neighbour, describing it as perhaps the greatest foreign policy lesson as far as Colombo is concerned in recent times. But sadly the reaction to the cartoon smacks of the big brother attitude that dominated Indo-Sri Lanka relations in the mid 80s. That is the most disturbing part for me in this whole episode.

PS: Indian political cartoonist Aseem Trivedi was today (10) arrested and jailed on sedition charges for his drawings that mock the government and politicians. Perhaps, the outrage at our cartoon is symptomatic of a greater wave of intolerance to criticism.