FUTA Statement regarding Right to engage in Trade Union Action 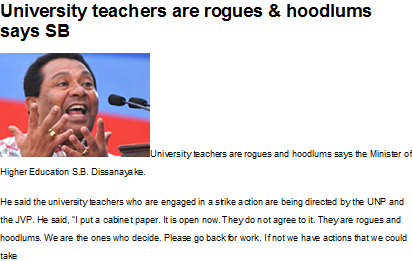 We wish to register our disappointment regarding media reports on the 7th of September quoting H.E the President Mr. Mahinda Rajapaksa that as a policy he does not engage in discussions with unions while they are on strike action. He is further quoted as saying that if FUTA wants to settle issues through negotiations, it should first suspend trade union action.

If the Executive takes such a position with regard to a fundamental freedom and right enshrined within the constitution, it suggests a lack of respect and regard for basic democratic principles from the highest authority of this country which is extremely alarming.

H.E the President is well aware that prior to resorting to trade union action, FUTA has been engaged in discussions for almost a year to resolve issues in the education sector. The lack of a proper response from the government drove FUTA to resort to strike action in July 2012. Since then, FUTA has participated in discussions with the various members of the government and has expressed its willingness to resolve the issue through discussions. Discussions were held with Mr Lalith Weeratunga, Minister Basil Rajapaksa and Dr P.B Jayasundera. However, the government has yet to provide a specific solution that signals to FUTA a willingness to resolve this issue. The Cabinet note that was shared with FUTA does not address the salary issues of university academics nor does it commit to a specific plan for increasing investment in education. Mechanisms for addressing the issue of university autonomy and politicisation have also not been specified. Although the salary issue has been discussed with the Secretary to the Treasury, FUTA still awaits a specific plan from the government in this regard. In such a situation, FUTA is not in a position to suspend trade union action.

FUTA has no desire to prolong trade union action any longer than necessary. We appeal to H.E the President and the government to refrain from delaying negotiations and to take immediate steps to resolve the current crisis in the education sector. The strike action has gone on for over 2 months not because FUTA was unwilling to engage in a negotiated settlement but because of the government’s inability to provide specific answers to the issues raised by FUTA.