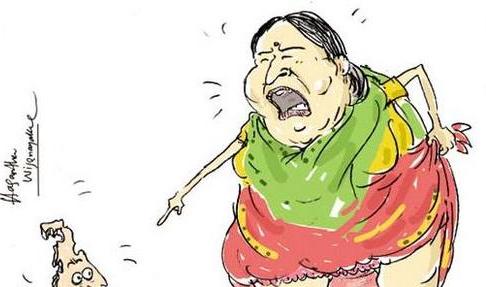 G Pramod Kumar
A shockingly vulgar cartoon published by a Sri Lankan newspaper featuring Tamil Nadu chief minister J Jayalalithaa and the prime minister Manmohan Singh in extremely bad taste is yet another instance of the proxy-speak of the island nation that should ideally provoke a tough reply from India.
On Sunday, Lakbima, a well-circulated Sinhala language daily in Sri Lanka, published a cartoon lampooning both Jayalalithaa and Manmohan Singh, ostensibly peeved at the recent tensions between Tamil Nadu and Sri Lanka, where a school football team was sent back, and a number of Sri Lankan pilgrims in the state came under attack.

The cartoon, gross and nasty, has created some ripples in Sri Lanka as well, but the government of India is yet to react. Presidential spokesman Bandula Jayasekera reacted on Twitter saying that the government did not condone the ‘vulgar’ cartoon, but there has been no official reprimand from the Sri Lankan government, and one of the employees of the newspaper has defended the cartoon, saying they were merely exercising their right to free speech.

Using proxies to target, smear and even attack opponents, while the government officially takes a conciliatory position, is a time-tested Sri Lankan practice of silencing dissent and running down people. That the newspaper is owned by Thilanga Sumathipala, a Colombo district MP of the National Freedom Party, (an ally of the ruling SLFP), is an easy giveaway of the State’s complicity.

Within the island, this double-speak of the government, while unleashing its proxies to do the dirty-work, is a common practice.  For instance, when the tensions with Tamil Nadu came to a head, the country’s deputy External Affairs Minister, Neomal Perera, told the Daily Mirror newspaper that the matter could be discussed in a cordial manner without the need to create diplomatic discord.

On the other hand however, powerful Sri Lankan Minister Wimal Weerawansa addressed a media conference and issued a not-so-veiled threat, asking what would happen if Sri Lankans chose to treat thousands of Tamil Nadu citizens who regularly visited Sri Lanka in a similar manner. (Read more)

And the practice is by no means a new one. Some time back, powerful minister Mervyn Silva led a video documented attack on the State run Rupavahini TV, but continued to be in the cabinet despite the government promising action.

The government then said that it stood for freedom of speech, but the minister under its patronage did exactly the opposite. The only punishment he got was a reprimand.

The attack against journalists, including disappearances, was rampant both during and after the war and in all the cases, the “investigations” reached nowhere. The attack on privately run Sirasa TV, and the murder of an outspoken editor Lasantha Wikramatunga, were among the possible examples of the extra constitutional proxy operations that mute difference of opinion in the country.

The role of the proxies was evident in the attack against Sirasa because the station’s cameras captured and broadcast the assailants arriving in a state transport bus and pelting stones at the TV station. Despite video evidence of people involved and the details of the bus and the operation, there was no action taken.

Similarly, a state role was alleged in the murder of Lasantha, for the precision and impunity with which it was executed in a heavily guarded Colombo. The real culprits are still at large.

The proxy-attack spares nobody. Not even the UN.

At the height of the war, while the government used diplomatese to deal with the UN pressure, its proxies called the organisation names, attributed motives and planted stories. And cabinet minister Wimal Weerawasana laid siege to the UN building along with a mob of unruly party workers. Perhaps it was a rare instance anywhere in the world when a minister picketed the UN while the government looked the other way. The newspapers also carried rabid anti-UN stories.

Similarly, in the recent past, the Sri Lankan high commissioner to India attributed motives to some politicians in Tamil Nadu for supporting the cause of the island nation’s Tamils. And it was only a couple of days ago when the same high commissioner said, in the wake of the recent developments, that “India is a relation while China is a friend”.

The point is proxy-speak, proxy-attacks and proxy-campaigns are a way of life for Sri Lanka’s ruling establishment and it spares nobody. And these are as vicious as physical attacks. Their language is rabid, nasty and sometimes outrightly vulgar as in the case of the Jaya-Manomohan cartoon.

The cartoon against two top leaders of India, which strives to side with Sri Lanka against the sentiments of Tamil Nadu and the international community, should be a strong wake up call for India on the way it deals with its island-neighbour.

The government of India is one of the top aid donors for the reconstruction of the post-war Sri Lanka, and goes out of its way to indirectly protect the latter’s regime from international action including from the UNHRC.

Sri Lanka might justify that it is a democracy, it believes in free speech and it cannot silence a free media although evidence as described here points to the control it can exercise. But as it has proved in the past, it can take action when it so desires.

Jayalalithaa and the politicians of Tamil Nadu should certainly intensify their demand to the union government to be tough with Sri Lanka, even if the PMO doesn’t feel ashamed of the way Manmohan Singh has been ridiculed in the cartoon.

It’s time they demanded that Sri Lanka came clean and stop its silly double-speak with us.
FP