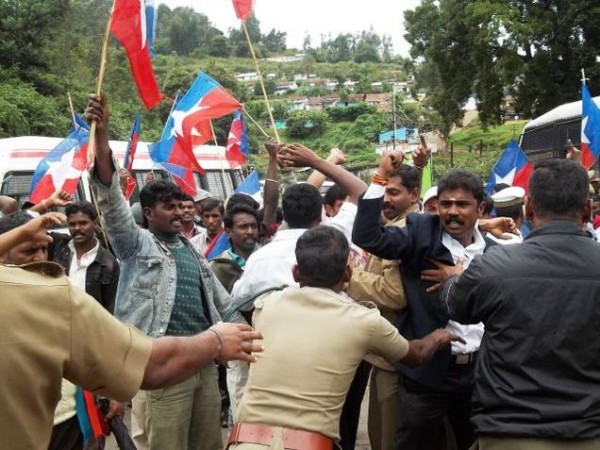 In Tamil Nadu, continuing spate of recent violent, rowdy protests targeting innocent Sri Lankan civilians visiting TN and India on purely private and religious tours, define how empty and extremist and therefore emotional and violent they can turn out to be, when picking on the Sri Lankan Tamil issues. The recent escalation of these violent anti people mob attacks since they last set upon a group of Sri Lankan pilgrims in Chennai in August 2011, is generally attributed to the two lager political entities, DMK and AIADMK trying to out do each other in their warped sloganising of the SL Tamil issue. Karunanidhi went about with TESO that wasn’t noticed by the Tamil political parties in SL, but for Jeyalalitha, it wasn’t right, if she did not out do him by sending off a SL schoolboy football team and punishing an employee of a stadium.
The two have their own very vested interests in parting and aligning with the SL Tamil conflict, depending on where they are in terms of State assembly power and elections. During the past decade or two, they have proved they can swap positions on the SL Tamil issue. After the conclusion of the war in SL, during which time Karunanidhi stood by Delhi and Jeyalalitha stayed mute, the Tamil lobby in TN fell into the hands of the smaller fry who campaigned against the war and thus took a foothold in the backyards of Tamil politics, there. Some thus turned out as colourful TN Tamil “heroes”, but have a very limited understanding of the Sri Lankan Tamil issue, now crying against “genocide” and demanding the Rajapaksas be hauled before Hague, ICC for “war crimes”. They have adopted as their rallying call, a separate “Thamil Eelam” for SL Tamils, not in support of those who survived the war and are still struggling to have a respected, decent life in their own land, but to be in vogue with the now splintered and fighting SL Tamil Diaspora.