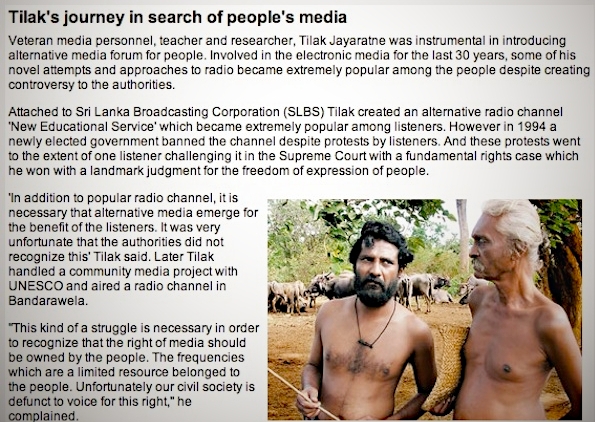 Tilak Jayaratne, veteran broadcaster and media advocate, passed away on September 6, after a long illness bravely borne. All those who knew Tilak, and who encountered him in the many different orbits that he inhabited, will recall the intensity which he worked, and the creative passion with which he interrogated the potential of mass communication, and ‘alternative’ media, long before these became fields of study and academic discourse. He was deeply committed to the principle of people’s ownership and participation in both the production and consumption of media and communication and to the end of his days he worked actively to encourage those involved in the media industry to pay more attention to this aspect of communication.

I first got to know Tilak during the years he worked in the technical section of the Sri Lanka Broadcasting Corporation and a part of the trade union movement. At that time, in the mid 1970s, he was a vibrant part of the community of young men and women watching plays and films and endlessly talking about them as well as about how one could use art forms such as theatre and the cinema, that could engage with a broader public, to build a process of critical inquiry into social and political issues. At the same time, Tilak was a creative writer, deeply committed to issues of social justice, and a thoughtful human being.

Through his experiences at SLBC Tilak gained not only expertise in the technical aspects of broadcasting in the pre-digital age, but also experience in the specificity of the radio as a tool of mass communication. He worked closely with colleagues involved in the creation of provincial radio stations, always focusing on the social and educational value of broad-basing broadcasting and enabling wider participation of diverse individuals and communities in developing programmes. The generation of the 1990s will recall him best as the ‘mover and shaker’ behind the New Education Service of SLBC, where he paved the way for radio listeners throughout the island to listen and learn about every new aspect of socio-economic and political thinking as well as about culture and literature from around the world. Some of the brightest minds in contemporary Sri Lanka developed their thinking and outreach on the basis of programming initiated and developed by Tilak through the NES. Sadly, as the state-owned media became less interested in innovation and more focused on becoming the mouthpiece of the state, the space for challenging existing social and media norms shrank until the SLBC was no longer an institution in which Tilak could work.

Tilak’s script for the teledrama Kadulla, directed by Dharmasena Pathiraja, remains a landmark in the history of teledrama production in Sri Lanka. Venturing in to this new form, Tilak showed producers and audiences that one could combine stories about individuals and families with a narrative that embraced social and political issues of a given historical moment. Through Kadulla and other scripts, Tilak created a genre for modern Sri Lankan television, a genre that was both popular, watched by tens of thousands of ordinary Sri Lankans, week after week, and at the same time a genre that challenged the viewer to question the status quo.

The report that Tilak did on media coverage of the Bindunuwewa massacre in Sri Lanka in October 2000, in which 27 young Tamil boys in detention were killed by ‘irate villagers’, is one example of the compassion and erudition he brought to his work. Reading and analyzing the media coverage, Tilak framed his analysis around scholarship on the construction of narrative and myth, referring to the work of Claude Levi Strauss, Roland Barthes and Stuart Hall, among others, to demonstrate how the Sinhala newspapers of the time diverged from the facts to construct a narrative in which the massacre was justified on the basis of existing ethnic stereotypes.

All his life, Tilak read voraciously, both fiction and non-fiction, covering a wide range of themes. Both while at SLBC and afterwards, he developed creative programmes for community-based broadcasting, encouraging young people to become more involved in and engaged with the process of communication. Starting off in the world of non-digital broadcasting, he made the transition to the era of television and the internet with great interest and enthusiasm. In the last ten or fifteen years, Tilak began to spend more time researching, traveling to live with marginalized communities to discover how traditional and indigenous modes of communication and narrative-building evolved and writing and talking about his work.

Tilak Jayaratne was a man of integrity and principles. He did not seek publicity or accolades. His death may go unmarked in the hallways where money and power hold sway but in the circles where his work was known, loved and respected, there will be many that mourn his untimely passing.