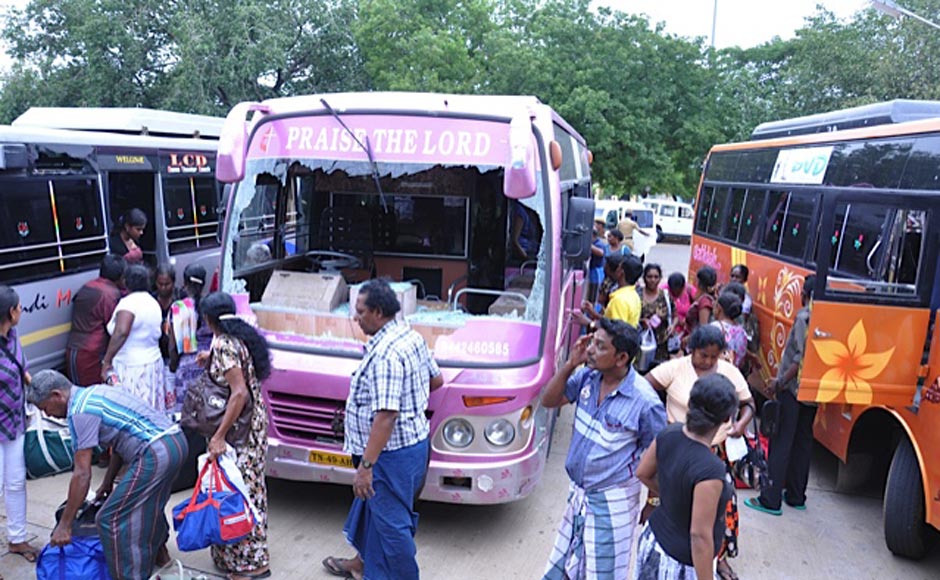 Small protests by fringe groups has escalated into a diplomatic crisis, Sanjay Pinto chronicles the debate
Fuelled by political posturing, Tamil Nadu has been transformed into a hotbed of anti-Lankan sentiment. The black flags and sloganeering resorted to by fringe groups in the aftermath of the decimation of the Liberation Tigers of Tamil Eelam (LTTE), three years ago, has been getting periodic shots in the arm from the State establishment, egging on mainstream parties to join the race to capture Tamil emotions. At one level, the situation is reminiscent of regional tension of the early Nineties—the water wars between Karnataka and Tamil Nadu over the Cauvery tangle; Tamils were attacked in Karnataka and Kannadigas bore the brunt in Tamil Nadu.

Consider the sequence of events over the last few weeks. Pilgrims to the Holy Shrine of Velankanni have had to dash back to Colombo through a special flight, after they were allegedly targeted by pro Tamil outfits. A college football team that played a friendly match against the Customs department at the Nehru Stadium was shown a red card by Tamil Nadu Chief Minister J Jayalalithaa and packed off from Chennai. The stadium officer who granted oral permission for the match has been suspended. Lankan trainees at the Air Force Station in Tambaram were shifted to the Yelahanka Air Base in Bengaluru after all political parties, barring the Congress, were up in arms. Jayalalithaa had shot off strongly worded letters to Prime Minister Manmohan Singh accusing the Centre of “ignoring the sentiments of Tamils” by repeatedly sending small batches of Lankan officers for training at the Defence Services Staff College in Wellington. Hundreds of Marumalarchi Dravida Munnetra Kazhagam (MDMK), Viduthalai Chiruthaigal Katchi (VCK) and Naam Thamizhar cadres were arrested for staging protests outside this college.

The regular firing on Tamil fishermen and their arrests by the Sri Lankan Navy, for allegedly straying into Lankan territorial waters, has not helped ease the tension either. It has only exacerbated the situation and revived the old demand to retrieve Kachachatheevu—an island gifted to Ceylon by the Indian Government in 1974.

Against the backdrop of mounting tension, the Government of Sri Lanka has had to issue a travel advisory to “Sri Lankan nationals in the interest of their security to desist from undertaking visits to Tamil Nadu until further notice.”

The United Progressive Alliance (UPA) Government at the Centre seems caught in a bind. There has been persistent pressure from its ally—the Dravida Munnetra Kazhagam (DMK) to push Sri Lanka to rehabilitate the displaced Tamil population and ensure that they live with equality and with dignity.

Just last year, buoyed by a landslide victory in the Assembly elections, Chief Minister Jayalalithaa passed unanimous resolutions urging the Centre to raise the issue of war crimes against the Rajapakse regime at the United Nations.

Not wanting to be left behind, the DMK has been making the right noises in Parliament. Karunanidhi even organised a Tamil Eelam Supporters Organisation (TESO) conference in Chennai last month. The Congress is in no position to upset the apple cart and antagonise its ally and finally gave its nod. But the political compulsions, quite surprisingly, didn’t stop Minister of State for Defence Pallam Raju from asserting that Sri Lanka is a friendly neighbour, and training of its officers will continue in India, thereby ruffling the DMK.

Possibly embarrassed by the travel advisory, an External Affairs Ministry spokesperson says the Government of India is in “close consultation with the concerned state governments, and has taken and will continue to take all measures to ensure the safety, security and well-being of Sri Lankan dignitaries and visitors to India, including to Tamil Nadu,” adding that “in certain instances, it has been noticed that important visits have taken place without prior intimation to the concerned authorities.”

What Lanka sees as intolerance, almost all parties in Tamil Nadu, barring the Congress, view as “a natural reflection of the anger of 6 crore Tamils”, says Dr Ezhilan, a pro Eelam voice and founder of youth.org.

Many believe the strident anti-Lanka stance adopted by Jayalalithaa may have emboldened even the fringe pro-Tamil outfits to up the ante. AIADMK insiders point out that the decision to send back the footballers “must not be viewed in isolation but against the backdrop of a series of provocative steps by Lanka—attacking our fishermen, sending officers for training despite our repeated objections and sneaking in sportspersons to play in a government facility by booking the ground in the name of the Reserve Bank Of India, to escape attention.”

Americai V.Narayanan, a Tamil Congress leader, wonders if “we will stop a Sri Lankan cricketer from playing in an IPL match in Chennai. Sports is a global thing. It unites countries. Why are we taking this to a ridiculous level? In the yester years, leaders used to douse the flames. Now, they regrettably fan them”.

A line of reasoning that is quickly rebutted by Dr Ezhilan, “Post 26/11, didn’t we snap cricketing ties with Pakistan? The war crimes against our Tamil brothers and sisters are no less heinous. How can you separate sports from politics?”

The debate will rage on. So will the tension.
tehalka