If anyone in the government ranks if you actually have ears, tell your President to go – M.A.Sumanthiran, M.P. 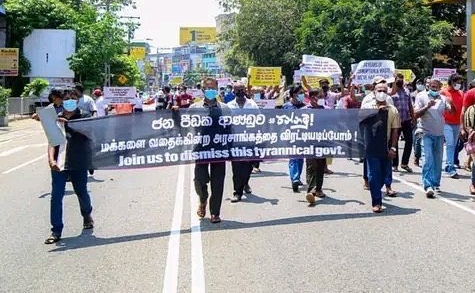 “Now having conceded that you have failed, you are now standing up here talking big. The country is in very serious crisis – you must go! and when I say you must go – the leader must go.”

And then in order to handle that situation what has the government done? The government has resigned, all members of the Cabinet have tendered their resignations. Now what does that mean? That means, that they accept, they accept that they are unable to govern the country.

Now having conceded that you have failed, you are now standing up here talking big. The country is in very serious crisis – you must go! and when I say you must go – the leader must go.  I mean, if after all of these days you have not understood what the people are saying, if you think that by removing the Minister of finance or a state minister tendering his resignation with effect from 1st of May or some other measure, that’s not sufficient.

We have serious issues with regard to the finances of the country. And after saying we will not go to the International Monetary Fund, you have eventually caved in and you have gone. And yesterday the IMF has issued a statement, I am going to read it from the Reuters news report.

I am reminded of something that I learned as to the word “bankruptcy”. When in ancient Greece, when there were lenders in the market place, they sat on benches – “Banku” in Sinhala, that’s how the word came “Bankuwala wadiwela hitiya” they lent more than they could actually afford, at the end of the day when they did not have money to give back, people came ,took that bench and broke it into two. “Bankus ruptus” that’s bankruptcy.

So people have now come to take your chair, your throne – what you thought the Rajapaksa throne – and they are breaking it into two. They are chasing you away from the government so the trader – the banker – the “Bankus ruptus” and he was chased away that’s what they are doing. Because you have made the country Bankrupt.

You did not keep your promises and that’s why you had to fight a war. That’s why you had to borrow so much. And now the time of repayment has come. But the last trigger, the trigger that sent you down the slippery slope, from which you are unable to climb back up, happened in December 2019. When President Gotabaya Rajapaksa became the President and wanted to hold the parliamentary elections very soon, he thought “okay with this wind we will capture power, coming to parliament as well” and announced a series of tax cuts. Lowered the rates of VAT, increased the threshold for income tax, corporate tax, etc. Now, the analysis shows by that one act alone 25% of the revenue to the country was lost. What is worse? 33% of the tax payers got out of that tax net.

And that is how everybody reckoned that you will not be able meet the balance of payments; your ratings dropped, and today at the public finance committee it was confirmed that in April 2020 we were shut out of the financial markets – we were blacklisted. Two years ago, we were blacklisted, but you did not tell the people that.

Your mismanagement your eagerness to win the elections by giving freebees, sweeteners to the people, that caused it. Once you were shut out of the international financial markets, it was the slope from which you could never climb back. That’s why the country is in this situation. At least now the people have woken up. That’s why they are saying “Go Gota, go home” that’s why they are calling on the President to go. Because it was the act of the President that triggered this collapse.

He must go, if this is a democratic country, if you have ears to hear, then listen; if anyone in the government ranks if you actually have ears, tell your President to go. The Constitution has made provisions when the president resigns how the country will be governed. All that will happen. But until he goes people will not relent, I can tell you that.

This is not something that any political party has organized, and I must tell the Chief Government Whip not to try what president JR Jayawardena tried in 1983. Put the blame on the left forces of the country. Driving them back underground. That’s what happened to the JVP who had joined the mainstream by then, President Jayawardena said Naxalite forces, Hon Vasudeva Nanayakara went underground, Hon Vijaya Kumaratunga was arrested, JVP went underground.

Now today, this morning, the Chief government Whip tried that with JVP,  please don’t do that. No political party has done this. This is the people’s movement; this is something unprecedented; this Country has never seen this before. That is why you are in shock. This is happening organically and people will not relent until Gota goes home.

( Eidited version of the the speech made in parliament on 06th April 2022, by Hon.M.A.Sumanthiran M.P. )