ICRC: Missing persons must not be forgotten; 16,000 missing in SL 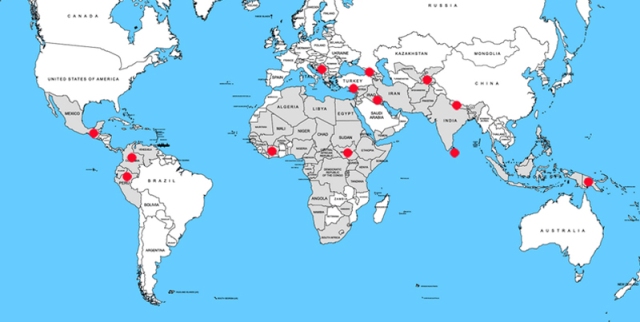 { Click here for an interactive map showing how the ICRC is helping families find out what has happened to missing relatives]
Geneva (ICRC) – In the run-up to the International Day of the Disappeared, 30 August, the International Committee of the Red Cross (ICRC) is calling on the international community to show greater awareness of the tragedy of people who have gone missing and the plight of their families.

Hundreds of thousands of people in all parts of the world have disappeared as a consequence of armed conflict, natural disaster or migration. Each person who vanishes leaves behind a large number of people – the family in particular – suffering the anguish of not knowing what happened.

“When people disappear, there are two kinds of victims: the individuals who have gone missing and their families, torn between despair and hope, living with uncertainty and pain, waiting for news, sometimes for decades,” explained Marianne Pecassou, who heads the activities carried out by the ICRC for missing persons and their families. Although what the families need more than anything is to find out what happened to their relatives, they also need an appropriate way to honour the memory of their missing loved ones. “They struggle against forgetting. Commemorative ceremonies offer them public acknowledgement of their suffering, give them a voice and bring them out of isolation,” said Ms Pecassou.

In some places, the numbers of people who have disappeared are staggering. In Colombia, for example, over 68,000 people are still missing, out of more than 90,000 initially reported as such. In Sri Lanka, the fate and whereabouts of more than 16,000 people remain unknown. In Peru, between 13,000 and 16,000 people have vanished and their families are still waiting for news. And more than 11,000 people of a total of almost 35,000 reported to the ICRC who went missing in connection with the Balkan conflicts are still unaccounted for. 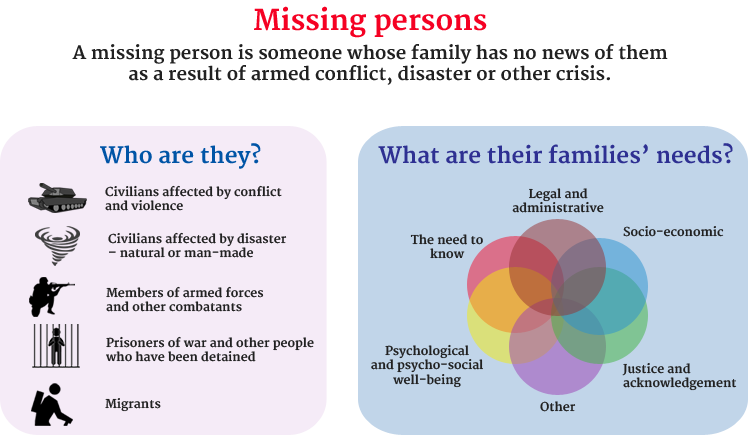 “States have an obligation under international humanitarian law to take all feasible measures to clarify the fate and whereabouts of people who have gone missing and to inform their families accordingly,” said Christine Beerli, vice-president of the ICRC, at a commemorative event at ICRC headquarters attended by government representatives and members of the humanitarian and diplomatic communities of Geneva.

The plight of people who have disappeared – and the suffering of their families, all too often ignored – has been a constant concern of the ICRC. The organization is currently attempting to establish the fate and whereabouts of more than 52,000 people. “This figure is just the tip of the iceberg, since these cases are only the ones brought to the attention of the ICRC by relatives. We know that many more people remain unaccounted for around the world,” said Ms Pecassou. Besides working directly with the families of missing persons, the ICRC plays an important role in bringing the issue of the missing onto the public agenda. It urges the authorities to take action aimed at responding to the needs of the families and encourages the search for their missing loved ones.

To mark the International Day of the Disappeared, the ICRC is unveiling a new publication entitled Living with Absence: Helping the Families of the Missing, which highlights the ordeal of people unaccounted for, underlines the multiple needs of the families and describes the tailored responses the ICRC is providing. The content is enriched by personal narratives of relatives of missing persons
ICRC