HRCSL recommends against extending detention of Mudalige and Siridhamma Thera 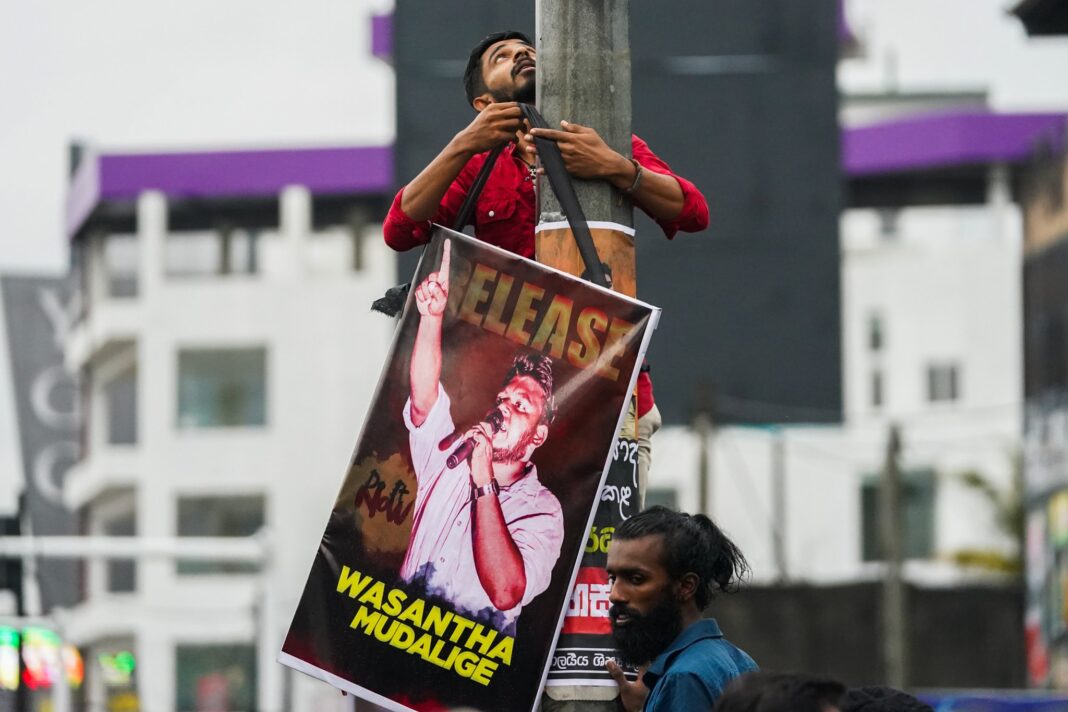 Observing that the arrest, detention, and continued incarceration of Inter-University Students’ Federation (IUSF) Convenor Wasantha Mudalige, and Inter-University Bhikkhus’ Federation (IUBF) Convenor Ven. Galwewa Siridhamma Thera under the Prevention of Terrorism (Temporary Provisions) Act, No. 48 of 1979 (PTA), is unreasonable and without justification, the Human Rights Commission of Sri Lanka (HRCSL) has made a recommendation to not extend the detention order issued against Mudalige and Siridhamma Thera.

A statement signed by HRCSL Chairperson and retired Supreme Court Judge Justice Rohini Marasinghe and HRCSL Commissioner Anusuya Shanmuganathan stated that a Director and Deputy Director of the HRCSL had visited Mudalige and Siridhamma Thera on Tuesday (25) in order to ascertain the state of their wellbeing. It added that Siridhamma Thera was found to be in poor health, and that his condition was serious enough to require hospitalisation at the National Hospital in Colombo for treatment.

“The HRCSL deems the investigations conducted into the ‘unlawful activity’ purported to have been committed by these detainees under the PTA to be unreasonable, unfair, vexatious, and wholly without justification, and asserts that the detainees in question can be successfully prosecuted under the general law.

“The HRCSL reiterates that the offence of terrorism can be dealt with under the general law, and reaffirms its commitment to reformulating a definition for ‘terrorism’ to facilitate this to the effect that ‘Any person by the use of threat or force and violence, by unlawfully targeting the civilian population or a segment of the civilian population, with the intent to spread fear thereof, in furtherance of a political, ideological, or religious cause, commits terrorism’,” the statement read.

The HRCSL added that the detainees had informed the HRCSL Director and Deputy Director who had visited them that they had only been interrogated on a few occasions during the period of detention regarding their involvement in the recent civilian unrest in the country, and added that the HRCSL is yet to receive a progress report of the status of the investigation from the Terrorism Investigation Department (TID).

“The continued incarceration and harassment of the detainees is a breach of their fundamental rights (FR) under the Constitution. The HRCSL is of the opinion that the treatment and harassment of these detainees are made all the more unacceptable by the fact that it is a deterrent to the public at large to exercise their freedoms of expression and peaceful assembly. Therefore, the HRCSL makes the recommendation to not extend the detention order issued against Mudalige and Siridhamma Thera, as any further investigations that the Police may need to conduct can be carried out successfully and expeditiously without the continued detention of these persons,” the statement concluded.

The IUSF had organised a massive protest in Colombo on 18 August against President Ranil Wickremesinghe and the Government. A total of 16 university students who were arrested during that protest were released on bail after being produced before the Colombo Magistrate’s Court on 19 August, while Mudalige, Siridhamma Thera, and IUSF member Hashan Jeewantha were placed under detention by the Criminal Investigation Department. Jeewantha was later released on bail after being produced before the relevant Magistrate; however, Mudalige and Siridhamma Thera are still being interrogated by the TID on a 90-day detention order signed by President Wickremesinghe in his capacity as Minister of Defence.