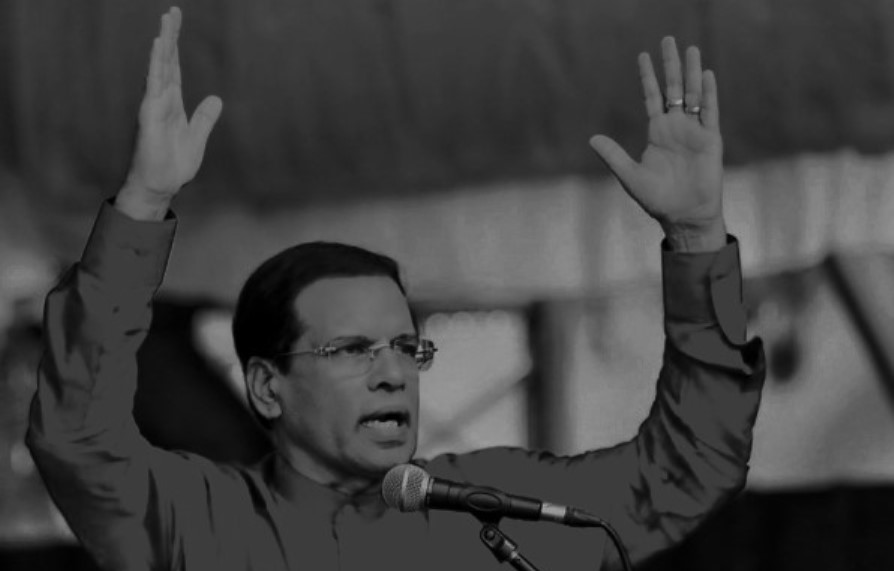 Image: President Sirisena ha now forgotten that it was not a UN demand but a commitment made by His government.

COLOMBO: Sri Lankan President Maithripala Sirisena has said he had the guts to dismiss a UN demand seeking foreign judges to probe the alleged war crimes committed during the conflict with the LTTE. “I have shown the strength of my backbone,” Sirisena said while addressing the executive committee meeting of his Sri Lanka Freedom Party (SLFP) held here yesterday.

His comments are being seen as a response to criticism by his own SLFP party. “Two weeks ago, the UN Human Rights chief had said Sri Lanka must have international judges in the accountability mechanism.

The following day, I had the guts to dismiss it,” he said. Sirisena’s unity government with the SLFP’s arch rival United National Party (UNP) led by Prime Minister Ranil Wickremesinghe has rejected the United Nations Human Rights Council’s (UNHRC) call for a hybrid mechanism with local and foreign judges to probe the allegations of war crimes during the last phase of the war with the LTTE.

The Tamil minority, however, insists on foreign judges, claiming that the local judicial system remains far from trustworthy to deliver justice to the large numbers of Tamil victims of the conflict. Sirisena’s comments came as Sri Lanka braced to ask for more time at the ongoing UNHRC session in Geneva to implement the 2015 resolution which stressed on the international hybrid mechanism.

Meanwhile, the Tamil National Alliance parliamentarians today signed a petition urging disallowing of more time to the Sri Lankan government on the resolution implementation. Opposition leader M A Sumanthiran earlier this week said that Sri Lanka must be given more time, not to dodge implementation but to commit for implementation of each one of the obligations. President Sirisena’s SLFP is divided between him and former president Mahinda Rajapaksa whose nearly a decade-long rule was ended by Sirisena in 2015.

The Rajapaksa backers calling themselves the Joint Opposition stayed away from yesterday’s SLFP parley despite invitations being extended to them, the party said. They accuse Sirisena of betraying the war victory achieved by Rajapaksa by Sirisena’s policy of give in. Last month, Sri Lanka said it needed more time to probe the alleged war crimes committed during the civil war, even as it asserted that the proposed mechanism to deliver justice to the victims would be homegrown and not a copy of the South African model. According to the UN figures, up to 40,000 civilians were killed by the security forces during Rajapaksa’s regime that brought an end to nearly three-decades long civil war in Sri Lanka with the defeat of LTTE in 2009.
The Hindu