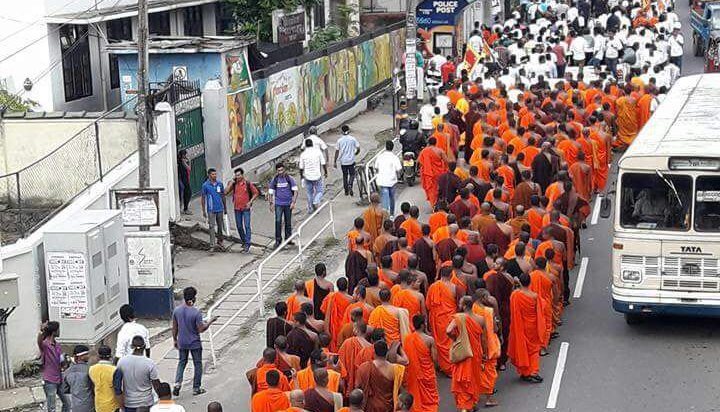 The JVP yesterday slammed the Government for failing to protect the religious rights of Sri Lankans and accused it of providing validation for extremist organisations that are still working to whip up ethnic disharmony in the country while calling for an investigation into how these organisations are funded.

JVP MP Vijitha Herath yesterday made an impassioned speech in Parliament calling on the Government to probe alleged links between the former Government headed by President Mahinda Rajapaksa and organisations such as the Bodu Bala Sena (BBS).

“There were credible allegations that certain extremist organisations were assisted by the military mechanism under the former Government. It was clear that these entities, which sprang up overnight, had impressive resources at their command. Where did these come from? Who supplied them? Are these still in operation? It is the best way to reveal the true part played by these organisations in the political arena to the public,” he said.

Participating in the Budget debate for the Buddha Sasana Ministry, Herath was biting in his criticism of the Government’s failure to decisively act in situations that trigger ethnic tension. Drawing examples from Batticaloa and Kilinochchi, he questioned as to why the Government had failed to make a clear statement and condemn the extremist organisations on both sides of the divide while working to present the truth to the public.

“The Government’s duty is to protect the rights of each citizen to follow the religion of their choice. Not to promote one religion over another or encourage different organisations. It not enough to merely allocate money to religious ministries. The Government must have a clear policy on how to deal with these extremist elements without merely giving them validation.”

Trotting out more examples, Herath recalled the statement made by Justice Minister Wijeyadasa Rajapakshe about Sri Lankans allegedly joining Islamic State, which was later rejected by Cabinet spokesman and Health Minister Dr. Rajitha Herath. He also warned the Government to diffuse possible tensions arising from Nainathivu being renamed ‘Nagadeepam’ that was proposed under a Gazette issued under the previous Government.

“There are simple ways to resolve these things but the Government is not doing anything substantial. Instead they are letting extremist elements set the agenda by creating issues where none existed before. No one has any opposition to Sinhalese calling this area Nagadeepa and Tamils calling it Nainathivu. These are all artificially created problems. We saw very clearly during the former Government attempts by these groups to subvert key policy problems on education, healthcare, food and housing by rousing religious issues instead.”

The JVP parliamentarian did not spare the present administration from using the “electric chair in Geneva” as a bogeyman to get public support. Herath also warned that the Government is fast losing the support of minorities and moderate Buddhists by not implementing the law against extremist groups in both the north and south.