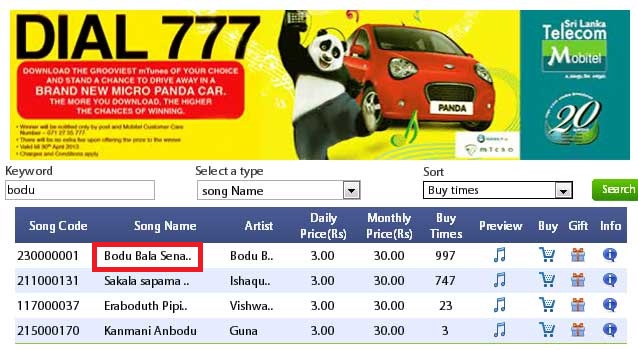 Racist and hate groups are supposed to remain on the sidelines of society, screaming their subversive rhetoric in order to appeal to the seedier side of the collective conscience. Their funding usually comes from shadowy sources with powerful interests and money to be made from destruction and chaos. All of them invariably will remain behind the scenes, after all  who in the name of God would want to be publicly associated with hatred?

Mobitel, apparently. Mobitel the subsidiary of the publicly listed Sri Lanka Telecom. One of the country’s largest telecom services companies, and one of the most visible corporates in Sri Lanka. Mobitel has been openly funding hate groups such as the Bodu Bala Sena (BBS) and Sinhala Ravaya. Evidence of Mobitel support for extremists first emerged at a BBS rally held in Panadura when it was announced that a ringing tone available for download via Mobitel would help fund the organization’s racist activity. Images (later published on Sanjaya Senanayake’s facebook profile, who by the way i must thank for much of the research for this post) revealed Mobitel advertisements in a newsletter of the Sinhala Ravaya. Uncharacteristically, Mobitel’s Facebook group has been avoiding all contact and even deleting posts of protests against this, for now, their once dynamic social media team seems to have slunk under a rock.

Widely known for their extremist nationalism, these groups have already attacked mosques, churches and even other Buddhist temples conducted illegal raids, spread fear and paranoia and generally taken a very loud and belligerent stance toward the country’s minorities. After initially targeting the Halal certification of the All Ceylon Jamiyyathul Ulama (which was peacefully resolved thanks in part to the ACJU’s good sense), the BBS has now turned its attention on the Hijab an element of Muslim culture that in some form or the other has been present in this country for centuries, and always in peaceful coexistence with other communities. The emergence of apparent large scale corporate backing for their activity is worrying to say the least.

A quick look at the ownership of Sri Lanka Telecom reveals some unsurprising and surprising details. Unsurprisingly you would find that the majority of the shares (49.5%) is owned by the government, 5.5% by the general public. This is kind of well known. SLT was fully owned by the government until it was partially privatized some years ago. But surprisingly, if you’d forgotten this little detail, shares owned by the Japanese NTT Communications were then sold to Treasury and Global Telecommunication Holdings N.V. This is supposedly an entity based in Netherlands but is actually a fully owned subsidiary of Usaha Tegas Sdn. Bhd  an investment firm based in Malaysia. Usaha Tegas also owns Maxis a Malaysian telecom giant. Sandip Das and Chan Chee Beng from Usaha Tegas serve on the boards of both Maxis and SLT.

It is rather ironic that Mobitel’s second biggest shareholder and the lifeline of its management and capital is based in a Muslim country, while at the same time it funds extremist right wing organizations pursuing strong racist agendas against Muslims and other minorities in Sri Lanka. If the BBS is anything to go by, Mobitel’s senior management probably has no issue with this glaring inconsistency in its moral standpoint. Last week I heard an Australian-Sri Lankan citizen and a member of the BBS, Chanaka Perera, comment on help received from a monk based in Malaysia to the BBS whilst at the same time condemning Muslims as a whole purely based on his views on Saudi Arabia. Hate is deaf to reason they say.

Mobitel has so far shown a complete lack of responsibility in responding to the thousands of calls for it to stop funding these extremist groups. Its continued silence is a gross violation of its public accountability. Cricketers like Mahela Jayawardene are brand ambassadors for Mobitel. I respect Mahela, and as a public figure and a person of influence being sponsored by Mobitel he should step up and say something about this.

Sri Lanka just came out of a 30 year war. I’m just saying that out loud you know, in case anyone has forgotten. The government so far seems to be perfectly happy to allow the BBS and its affiliated groups to carry on with their campaign of hate, although voices of dissent have begun to emerge; you know things are getting really out of hand when Mervyn Silva himself stands up for what is right. The president has been strong worded on the racist issue, but so far all of that has been lip service and none of it directed at any specific racist organizations. The all powerful Government of Sri Lanka has failed to take any concrete steps to stop this spread of hate and violence.

Meanwhile, the Police is cooperating with extremists, and now government owned companies are openly funding them.
UPDATE: Mobitel has since issued a highly inadequate response.
GG