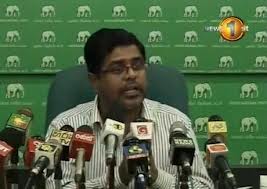 Jathika Hela Urumaya, (JHU) a constituent partner of the of the Rajapaksha government has callled on Sinhalese Buddhists to be determined to teach selected  Muslim leaders a lesson that they will never forget. The statement issued by Nishantha Warnasingha, the National Coordinator of Jathika Hela Urumaya (JHU includes a scathing attack on Minister Rauf Hakeem, leader of the another constituent partner, the Sri Lanka Mislim Congress  of the Rajapaksha government.

The translation of the JHU  statement

It is apparent that the majority of Muslim community has not supported the hartal organized by Muslim Rights Organisation, with the leadership of Provincial Councilor Mujibar Rahuman, against the so called injustice towards Muslim community. Only a few towns under the influence of Muslim extremists had joined hands with Mujibar Rahuman who is a Muslim extremist and a racist. It is reported that in Kaththankudi, Kalmunai, Akkaraipattu, Samanthurai, Kinnia and Muttur, Muslims have closed their shops and joined the hartal. This shows that it is only the Muslim extremist groups and their political parties inhabited the East, who expressed agreement with the Muslim extremists ordering anti-Sinhala and anti-Buddhist hartal from Maligawatta, Colombo.

This hartal founded on baseless allegations is becoming increasingly anti-Buddhist to become Muslim-patriots and heroes among the Muslim community. The reason could be narrow political needs and the intention to protect one’s share. We have been continuously saying that the South East region is being devoured by Muslim fundamentalism and extremism. Based on these areas the concept of Muslim Motherland is also coming to the surface. That is what the areas where the hartal was successful demonstrate.

It is not the Sinhala community but the Muslim community it self that should question where these cardboard heroes like Asad Sali and Mujibar Rahumans, who did not organize a hartal  when the terrorist Tigers attacked and ejected Muslims, when Muslims were killed in mosques, or when ninety thousand Muslims were evicted from the North. Did these cardboard heroes protest, did they talk about rights, when Rauff Hakeem singed agreements with Prabhakaran and betrayed Muslims?  When Tigers occupied the Muslim village Manirasakulam, where were Hakeems, Asad Salis and Mujibar Rahumans? It should also be reminded to these extremist that the attempt by Muslim extremists, including Hakeem, to topple the Rajapakse government in 2008 at a time the East was liberated, will never be forgotten by the nation.

These cardboard heroes and extremists, who didn’t provide a slightest support to win  peace and freedom  which was achieved through  defeating the terrorism at the cost of 26000 lives of the Sinhalese youth. Today they are comfortably enjoying these peace and freedom and now organizing hartals. Sinhalese Buddhists should be determined to teach such Muslim extremists a lesson that they will never forget. . We request moderate Muslim Brotherhood to rally against these Muslim extremists’ criminal statements and actions full of complete falsehoods; and we request them not to be ungrateful to the Sinhala Buddhists.

(The translation of the Sinhala language  press statement  of the JHU published in the lankacnews web site on 27th March 2013. The ulr; http://lankacnews.com/sinhala/news/92404/ )