Give Us Our Children Back’: Hunger Strikers in Sri Lanka Demand Answers 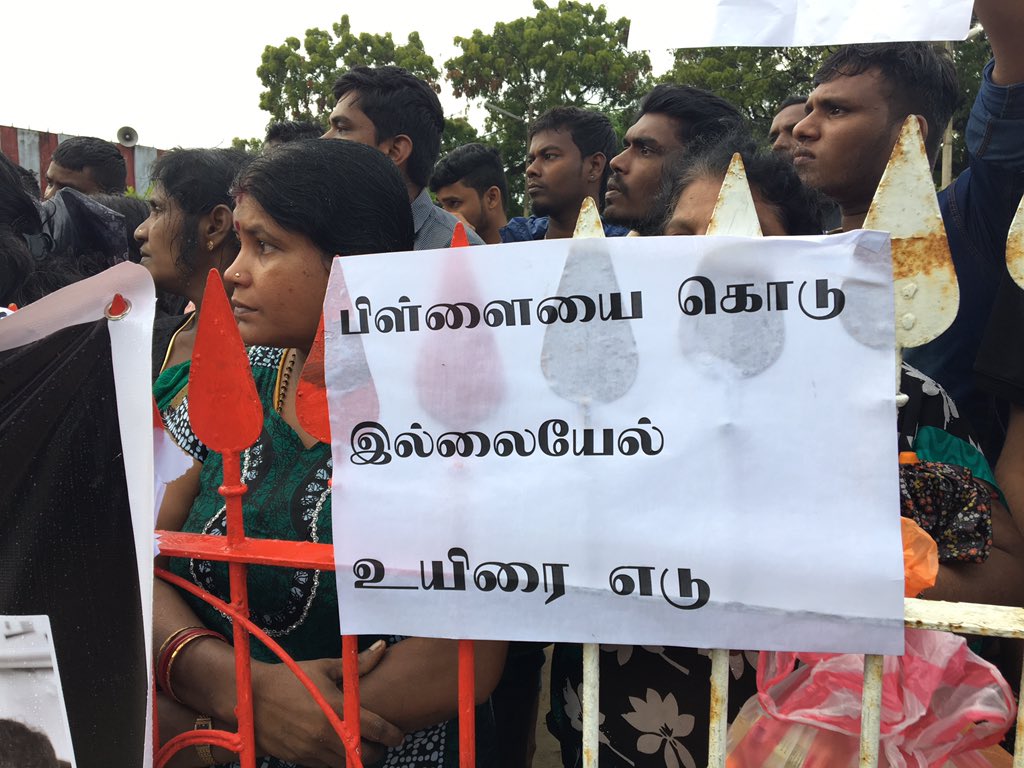 Image courtesy of @uthayashalin: In Jaffna people came out supporting the campaign.

COLOMBO, Sri Lanka — Seated on a platform outside a regional post office in Sri Lanka’s former war zone, about 150 miles north of the capital, Colombo, a mother whose son has been missing for seven years sobbed as she spoke.

“All we are asking for is for them to give us our children back. They took my child,” the aggrieved mother, Sangarappillai Vanalochini, said in an interview widely viewed on television and social media in Sri Lanka this week.

For four days, Ms. Vanalochini has refused food and water, joining 13 other people on a hunger strike in the northern town of Vavuniya, only a few miles away from the center of some of the most brutal fighting during Sri Lanka’s 26-year civil war, which ended in 2009.

She and the others fasting are trying to force the government to investigate what happened to family members who disappeared during the conflict in which Tamil Tiger rebels fought for a separate state for the Tamil minority in the island nation’s north and east.

The condition of the hunger strikers grew so grave on Thursday that Sri Lanka’s state defense minister, Ruwan Wijewardene, flew from the capital to meet them. The strikers agreed on Thursday evening to call off their fast after he promised in writing to ensure “a proper response on Feb. 9 through a meeting between the families of the disappeared and a delegation of government ministers and officials at the office of the prime minister,” said Ruki Fernando, an activist who has been in regular contact with the families.

If the response is not satisfactory at that meeting, “the families have said they will restart a larger fast unto death,” he said. The state defense minister could not immediately be reached for comment.

The government under the former president, Mahinda Rajapaksa, defeated the Tamil rebels, ending the civil war in a surge of violence. Amnesty International estimates that 60,000 to 100,000 people are still missing from two communist insurgencies and the long war with the Tamil Tiger rebels.

The current president, Maithripala Sirisena, was elected to office in a stunning upset in 2015, to a great extent on the promise of promoting justice and reconciliation, including an investigation into the disappearances during the war. But little progress has been made in the two years since he took office.

Human rights groups say that many of the thousands who disappeared were abducted by military units and paramilitary groups, while some who surrendered to government forces at the end of the conflict never came home.

Canagasabapathy Viswalingam Wigneswaran, the chief minister for the Tamil-majority Northern Province, said in a letter to Mr. Sirisena this week that the Tamil people had placed “tremendous expectations and hope” in Mr. Sirisena in 2015 and helped to elect him to office.

“Those hopes seem to be eroding in recent times,” he said in the letter.

A Tamil member of Parliament, S. Sivamohan, said that Tamils had grown increasingly frustrated at the lack of progress. He noted that the Sirisena government passed a law to set up a permanent office last August to investigate disappearances. But six months later, the office has yet to be constituted.

“All the initiatives of the government remain on paper, there has been nothing evident in practice,” Dr. Sivamohan said.

Mr. Fernando, the activist, said that the strikers had expressed deep frustration at the beginning of their fast, and that years of protests, petitions, complaints and testimony had yielded nothing.

“If the government is serious about postwar reconciliation, it’s time to move beyond rhetoric,” he said.
NYT