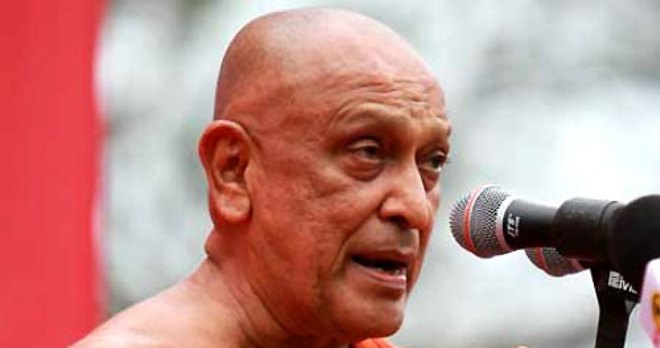 Convener of the National Movement for Social Justice, Ven. Maduluwawe Sobhitha Thera, who is tipped to be the common candidate at a forthcoming Presidential Election, in an interview with Ceylon Today said the entire discussion on fielding a common candidate would be futile if the United National Party (UNP) and the Janatha Vimukthi Peramuna (JVP) were not involved in the entire process.

Excerpts of the interview:
Q: Are there any obstacles that prevent you from becoming the common candidate at a forthcoming Presidential Election?
A: There is no particular obstacle as such. We began our activities with a clear vision of not having another Presidential Election. Therefore, we launched our initial campaign with the slogan ‘We don’t need another Presidential Election’. The incumbent President is the most suitable person to do it. It is definitely not a tiring task for him as it is one of the prime election promises he gave. That is a promise he placed before the people when seeking their mandate at previous Presidential Elections. He is a person who was engaged in a procession from Colombo to Kataragama demanding the abolition of the executive presidency. Also, when the 1978 Constitution was presented in Parliament, the SLFP Leader at the time, Sirima Bandaranaike, in a long speech, condemned and criticized the executive presidency by analyzing clause by clause. This is an original policy of the Sri Lanka Freedom Party as it was they who strongly condemned and worked against the executive presidency.

All those who were against the executive presidency, like Party Leaders Vasudeva Nanayakkara, Tissa Vitarana and D.E.W. Gunasekara, are now with the President. There is a protest against the executive presidency within the government at present. On the other hand Speaker Chamal Rajapaksa has also requested the executive presidency be changed. In latest developments, the left leaders handed over a letter demanding that the government go for a General Election by abolishing the Executive Presidency, instead of holding a Presidential Poll. Now the necessary background has been created and what President Mahinda Rajapaksa should do is to listen to what people say and do what he once believed was right.

We could solve this matter easily before things get really complicated if he takes measures to abolish the executive presidency and appointing a Prime Minister who is completely accountable to the Parliament. This is what we are giving priority to.

If that is not successful then our second appeal is to all parties and groups in the Opposition and those in the government, who are against the Executive Presidency, to come to a common platform. That is to make a common policy victorious. We don’t want to see an individual winning. It is extremely fruitless to elect Ranil Wickramesinghe by ousting Mahinda Rajapaksa as it will not fulfil what the people need. A principle should be followed to win.

We have come up with three main suggestions to achieve good governance, restore democracy and ensure supremacy of the judiciary. Those include the abolition of the Executive Presidency, re-enforcing the 17th Amendment and establishing an independent Elections Commission.

The challenge at hand is to come up with a policy plan to eradicate corruption, fraud, ensure law and order and a proper electoral system, where correct people can contest and get elected. Once all of us can agree on a policy, then we can decide who is going to contest. However, we are yet to reach a consensus.
We have extended an open invitation and many have accepted it. But, none have been able to agree on one policy.

Q: While you are talking about fielding a common candidate, the main Opposition is insisting that Wickremesinghe is the most suitable person to contest the incumbent President. What is your opinion on this?
A: Fair enough. As the main Opposition Party, they have every right to field a candidate. Even though they say so, they are also very much involved in the discussion on a common candidate with us. If he (Ranil) can show that he can get everyone else to agree to these policies of ours and to abolish the executive presidency, we have no issue with his contesting.

Q: Has Wickremesinghe’s candidacy been discussed with you?
A: We don’t care who is contesting. What we are concerned is whoever comes as the common candidate, he/she should uphold our policy and make sure that the policy is implemented. It can be either Wickremesinghe or someone else.

Q: Venerable Thera, you think a policy could be placed before the people and ask them to cast their vote without fielding an individual as a candidate? Do you believe Sri Lanka has a political culture of voting for manifestoes sans candidates?
A: Yes … we must agree on a person to be fielded as our candidate. That should be done through discussion. We must all come to a consensus. I can’t say “ok here is our candidate, please vote for him/her.” We can select that individual through cordial discussions. We are committed to make sure that whoever we select is capable of winning the election.

Q: So, have you got any individual(s) in mind to be considered as a prospective candidate?
A: Yes, we have been evaluating a few individuals. Several rounds of discussions have been held so far. We are yet to finalize as to who it is.

Q: Can you give us at least a few names?
A: No. There are quite a few names being suggested and we will not disclose details of those individuals as we have decided to keep it a secret at this juncture.

Q: Are you among those ‘quite a few names’?
A: Yes. I am also amongst those being nominated and it is also under discussion.

Q: Have you decided on a party and symbol that you or any individual who would be selected as the common candidate would contest under?
A: We must discuss and come up with answers to those things.

Q:They say the election would be held in the early days of January 2015. Don’t you think there is hardly any time left for you to decide on all these things now?
A: No, I think there’s plenty of time left. Even the election date is not officially finalized yet. There are signs that it will be postponed to March because of the Pope’s visit.

Q: What if it is not postponed?
A: We are confident that we could reach a final decision on everything even at the last minute.

Q: Will there be enough time to register a new party?
A: There are plenty of registered political parties in the country.

Q:It seems like you will join one of the existing political parties?
A: Yes. There won’t be any issue when we take the name of a political party already registered.

Q: Now, the Bodu Bala Sena has said they will support whoever is going to annul the 13th Amendment. Are you lobbying for their support as well?
A: No we are not going that far. What we are discussing at the moment is to introduce the 19th Amendment to the Constitution, where we would be able to do these immediate changes. After doing so, there are so many other things left to do. We have to introduce a completely new Constitution. We can discuss about the 13th Amendment and other issues only at that stage.

Q: But, even government allies are demanding the abolition of the 13th Amendment saying Provincial Councils are useless. What is your take on this?
A: No one can say so. The 13th Amendment is already there in the Constitution. A new Constitution should be introduced if at all to get rid of it. But once we are done with abolition of executive powers maybe we can think about going for a model that was adopted by South Africa.

Q: Do you agree on devolving police and land powers?
A: Power has already been devolved to Provincial Councils. Devolving land and police powers is something that we need to sit and talk with the Provincial Councils. That is the time when we could discuss about the 13th Amendment and what we should do about it.

Q: The UNP is saying that they are thinking of a common party and a symbol to mobilize all anti-Rajapaksa forces under one umbrella. They also vow that any attempt to oust the incumbent President without their involvement would not be successful?
A: True. There is no point in even discussing a common candidacy if the UNP and JVP are not supporting. If it is only three or four of us who are discussing and lobbying for a common candidate, without these parties, we will only end up antagonizing each other without achieving anything. Our demand is to agree on one policy. On the other hand, whoever elected is going to be there for only six months.

Q: What exactly is going to happen after the six-month period?
A: After that Parliament will be dissolved. Then a government will be formed by whichever party that wins the election. It can be UNP or it can be SLFP.

Q: We have had previous experiences where almost all presidential candidates, from 1994, promised to abolish the executive presidency once they win. Can you give an assurance that this person (common candidate) will do it in six months?
A: How can I issue guarantee certificates for others? But I don’t think a person who will be elected to office after seeking the people’s mandate by chanting the promise to abolish executive presidency, hundreds and thousand times, like a mantra, will be able to continue in office without fulfilling his/her promise. His/her conscience will not let him/her live peacefully.

Even though it was discussed right throughout for almost twenty years, this is the first time the topic is given utmost priority. Not only the Opposition but the majority in the government also have given serious thought about abolishing the Executive Presidency.
We think we can build that trust among the public about the candidate. You won’t be able to drink your cup of tea if you start seeing crocodiles in it.

Q: There is an allegation that you are carrying out an agenda of NGOs?
A: Those things are frequent in Sri Lankan politics. Earlier, they said that I am an agent of the Catholic Church. Now they hardly bring that allegation up. Now the Catholic Church allegation has been replaced by NGOs. Now Gnanasara Thera (Ven. Galagodaaththe Gnanasara Thera) is also said to have received funds from Norway, isn’t it? Don’t you think he should clear his name first before pointing fingers at others? Anything that is not coming under the government is an NGO. Now if you take the Dayaka Sabha of this Naga Vihara, it is an NGO. It is a pathetic and ridiculous trend to call anybody and everybody NGO agents.

Q: Didn’t you recently come before the media and say that Wickremesinghe should not contest?
A: No. We have no right to say so. After all, he is the Opposition Leader of this country. But let’s sit together and discuss it.

Q: If it was decided that you should be the common candidate at the end of all these discussions, will you accept the challenge?
A: Yes. I can’t say no to people, as it is an attempt to create a just society.